Another Queen becomes a Prince of the Church 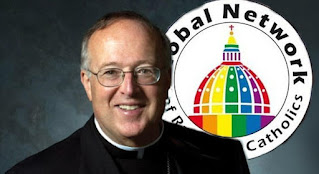 Pope Francis announced on May 29 that he will create 21 new cardinals, 16 of them electors with a right to vote in the next conclave, including bishops Robert McElroy of San Diego, Calif., and Arthur Roche of England.

The choice of Bishop McElroy is the biggest surprise of this consistory for the church in the United States. A graduate of Harvard, Stanford and the pontifical Gregorian universities, Bishop McElroy has demonstrated that he is one of the strongest supporters of the pope’s vision of church among the American bishops since Francis appointed him to be bishop of San Diego in March 2015. By choosing him to be a cardinal, instead of others, Pope Francis is sending a powerful message to the American bishops and church.  Continued

Update:  Karin, not only will we not remove the survey, we're including a link to it in the original post:  https://lifepetitions.com/petition/pope-francis-don-t-make-bishop-mcelroy-a-cardinal-he-knew-about-mccarrick?

Why do you sodomites lust so much for the Purple?? St. Peter Damian

Thank you also to Pope Benedict who first named him a bishop.

"Does this red make me look gay"?

"Does this red make me look gay"?
Try it on and find out, Jimmy boy.

This is a good one.
Michael Sean Winters at NCR is calling him the next St. John Henry Newman.
Winters sounds like he is getting that tingle up his leg and swooning with "goody-goody"s.
And he is already sucking up....big time.
No. I didn't mean that literally. On second thought, I will let it stand.

How dare you post a petition calling into question the prudence of the Holy Father.
Webmaster: take this down!

@Karin 🙄😂 Living in Fuktardia. Population YOU.