The “Systematic” War in Ukraine

The war in Ukraine and the geopolitical interests of Russia, the USA and the EU.

The war in Ukraine is viewed from different angles, including cultural and theological.  Stefano Fontana, Director of the International Observatory Cardinal Van Thuan for the Social Doctrine of the Church and Editor-in-Chief of the Church Newspaper of the Archdiocese of Trieste, spoke with Gianfranco Battisti, Professor of Economic Geography at the University of Trieste, focusing on the financial geography and geopolitics, on geopolitical aspects of Ukraine- conflict.

Stefano Fontana: The countries that are opposed to Russia - I don't call them Western, because Russia is historically and culturally part of the West, that is, European - because they seem to consider it unworthy to take into account Russia's geopolitical motives.  I ask myself: how can you start peace negotiations if you don't even consider the reasons and interests of the country you want to negotiate with – whatever those may be?

Gianfranco Battisti: Since it is a fact that geopolitics is neither a branch of ethics nor a journalistic exercise, but a thorough and unvarnished analysis of reality, I would say that the question already implies the answer.

Across the West, the authorities - and 95 percent of the media - assume a priori that Russia is wrong.  That can't be true, because good and bad cannot be separated by a political boundary.  It follows that beyond lip service there is no intention to negotiate.  It must also be said that this is a conflict that has caught almost all governments on the wrong foot, leaving them unable to respond rationally.  In reality, it is not so much about the conflict between Russia and Ukraine: we are approaching the final phase of the East-West conflict, which we thought ended in 1990.

The only difference from before is that Russia now seems alone against the offensive of the entire Western coalition, with all the risks involved in plunging a nuclear power into crisis.  It also seems clear that this is indeed a US-Russia showdown.  As for the others, Ukraine "offers itself" as a battlefield, while the rest of NATO members turn out to be satellite states, mostly involved without much conviction.  Their leaders try to give the appearance of political initiative, both domestic and continental, but in reality fall into masochistic behavior.

Stefano Fontana: Any war that is not only local - and the one in Ukraine cannot be considered only local - leads to major changes in societies, in culture and in the global order of economic and political systems.  Let's think about what the two world wars did in this sense.  In your opinion, will this war also have far-reaching effects?  Will it be an opportunity for a Great Reset, which by the way is already underway? 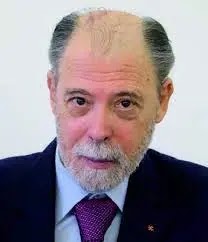 Gianfranco Battisti: It is undoubtedly a systemic war: it will mark the transition from the world as we have known it to a very different and probably worse world.  The forces that knowingly pushed Russia into an adventure that is proving to be a trap are the same ones that want to implement the Great Reset, at least across the OECD area.  Behind it, however, is the redefinition of global hegemony.  A project that represents the last resort to guarantee minimal survival for the United States, a military superpower that no longer has any economy behind it and, it seems, not even a society that can be called civilized.

At the local level, in the logic of other times, it could be the “founding war” of a finally independent state community for Ukraine.  Unfortunately, times are no longer such that this would be possible.  The mechanism that has been set in motion cannot be stopped – and one does not want it to be stopped.  What is so tragically moving about the whole thing is the Ukrainian people, who have been maliciously promised a bright future, when in reality they are getting a field of rubble, which is why they will have an emigration fate, as is the case with the Syrians.

From a military point of view, it is a preventive war that essentially pursues two goals:

1. To permanently prevent the establishment of normal relations between the EU countries and the Russian Federation, thereby reaffirming the Anglo-American logic codified in 1904 by Sir Halford Mackinder, the 'father' of British geopolitics.

2. To deal a mortal blow to Russia and weaken her in view of the crucial confrontation with China.  It is clearly in the interests of the two Atlantic powers - and here we can understand the real reasons behind Britain's otherwise incomprehensible exit from the EU - because an EU without raw materials and without the Russian market will inevitably turn into a huge colony that is fully subject to the "care" of the Atlantic multinationals.  Those who believe that this could mark the birth of a 'real' European state would do well not to drink too much wine.

In any case, the seismic movement that was triggered will take many years to stabilize.

Stefano Fontana: Italy took a rather “reckless” stance in the war in Ukraine.  Italian Prime Minister Mario Draghi's speech to Parliament on March 1, 2022 was quite "belligerent" and in stark contrast to Italy's traditional foreign policy.  Does that mean that at the moment there is no Italian foreign policy and that Italy adopts a position that is determined by others?

Gianfranco Battisti: Like Monti, Draghi is not a prime minister elected by the Italians, but primarily a banker linked to international financial interests.  He is a man of the apparatus, a skilful manager whose scope of action is severely restricted by the instructions given to him from above and which he then drops like boulders on a disordered, i.e. not really capable of acting, parliament.  To think that he could pursue an "Italian" foreign policy, even if he wanted to, would be to be guilty of naivety.  Worse still, no Italian politician currently seems to have the sine qua non to lead the country.  The only hope is that, in the best Italian tradition, Draghi's words are just words.  But it seems to me that words must be followed by deeds, especially since increasing military spending to 2% of GDP is a mantra that the US has been teasing Europeans for years.

Stefano Fontana: As a "European" response to the Russian invasion of Ukraine, there is constant talk of EU countries increasing military spending and creating an EU military force.  What do you think of this disturbing prospect?

Gianfranco Battisti: In the face of an economic crisis that is proving to be frightening in terms of its gravity and its extent in space and time, the mere thought of increasing military spending carries a very negative connotation.  One thing is certain: when something goes wrong, the political class responsible for the economic and social collapse of their countries jumps enthusiastically into the arms race.  They delude themselves that they are doing something to restart the economy while they look forward to the bribes that will come with it.  In reality, it's a road that leads straight to Hell, since weapons, once at hand, are inevitably used.  The state of war is also attractive to failed politicians so that they can silence any form of protest.  In any case, buying guns when budgets are deep in the red means preventing any serious discussion about sanitation.

As for the ambition of an EU military power, this is yet another scam that the politicians in Brussels are dishing out to our peoples.  Everyone knows, and they are the first to know, that the US will never allow the emergence of a European military apparatus independent of its control.

Finally, why should we arm ourselves?  The Ukrainian tragedy proves ad abundantiam that Russia poses no threat to Europe.  Not only because its main interest is in continuing to sell us its raw materials, which it does despite everything, but simply because it has no military apparatus to worry us.  That's why it doesn't even think about attacking us.  We are experiencing a colossal mystification that we inherited from the “Cold War” and of which the “ruling class” in Kyiv today is one of the architects.  On the contrary, has one of the many philistines in circulation ever noticed that the EU is nibbling away at a piece of Russia every day?  And isn't that always peaceful?

In the logic across the Atlantic, the short-term goal is to make money selling obsolete weapons, while the long-term goal is to fight WWIII in Europe and Asia, not the US.  We're talking nuclear war because that's what the F‑35s -1 we're all so interested in are for.  The fact that no one is able to convey these elemental truths says a lot about the leaden cloak that has settled over our media - and partly to blame is a pandemic that was announced in advance...

Stefano Fontana: What do you think of the plan to equate the European Union with Europe?

Gianfranco Battisti: It's a short-sighted vision that comes from the minds of politicians who don't generally belong to the category of great thinkers.  It's also geographically, historically, and culturally incorrect.  If we then look at Russia, at least at the so-called European part of Russia (which is no small matter), we have to realize with no small concern that, despite everything, today it represents something of the idea of ​​Europe that we have nurtured so hopefully up to now, is left.  In this vast country, Europe is still a myth, while we have a cupio dissolvi, a desire for dissolution that we imported, who knows how spontaneously, from America.

An all too quickly forgotten warning resurfaces: "Europe will be Christian or it will not be".  Weapons will certainly not unite us, but rather destroy us.  From this point of view, the persistent effort to erect a wall of hatred that helps separate Christians in the East from those in the West is a crime that cries out for vengeance to God.  And on this point, the Christians in Europe unfortunately do not always have a clear conscience.  The reaction in Ukraine to the message of peace proclaimed during the Via Crucis in Rome is emblematic.

1 US stealth multirole fighter aircraft of the fifth generation from the company Lockheed Martin.