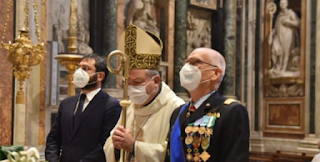 Archbishop Carlo Maria Viganò, the former apostolic nuncio in the USA, and the Italian military bishop Santo Marcianò have exchanged blows in public in the past few days.

Archbishop Viganò replied to the Military Ordinary the same day he sent a message of solidarity and his blessing to truck drivers protesting in Canada against Prime Minister Justin Trudeau's Corona measures.

In a statement on January 31, the Italian military bishop attacked the critics of the Corona measures as “Corona deniers” and defended the so-called vaccination campaign, with which as many people as possible are to be injected with a genetically manipulating Covid preparation.  The military bishop's statement came against the background of ongoing protests against the introduction of compulsory vaccination.  Such a rule now applies in Austria to everyone over the age of 18 and in Italy to everyone over the age of 50.

The criticism of compulsory vaccination is summed up in one sentence: there is no Corona pandemic and there has never been one, vaccination is not a vaccination but a gene therapy intervention that almost nobody needs, which is also ineffective but dangerous  .

One of the best-known critics of the Corona measures is the former apostolic nuncio in the USA, Archbishop Carlo Maria Viganò.  The former top diplomat revealed Pope Francis' involvement in the McCarrick case in 2018.  Military Bishop Marcianò did not name Archbishop Viganò in his January 31 statement, but meant him when he wrote of "a bishop" who made "conspiratorial statements" and called on the police "to disobey".

On February 8 Archbishop Viganò replied to his brother in the episcopate:

"Once again, I state that the condemnation of 'extreme positions' is limited to a general assertion, without refuting it with scientifically and legally sound arguments."

The “great sense of responsibility” to which the military ordinary appeals, according to Archbishop Viganò, “assumes that Covid-19 is a serious disease and that the only way to contain the contagion is to use an experimental gene serum, mistakenly labeled as  'Vaccine' and otherwise does not protect against active or passive infection.  This serum, as has been amply confirmed by the testimonies of well-known scientists and the pharmaceutical companies themselves, is made from cell lines of aborted children and is therefore immoral.  In addition, other fetal material is needed for maintaining serum cultures and producing them in large quantities, according to wiretaps conducted by drug company executives.  By establishing these facts the note of the Congregation for the Doctrine of the Faith is superseded because it adds elements not known at the time.”

Archbishop Viganò alludes to the note of the Congregation of the Doctrine of the Faith "on the morality of the use of some vaccines against Covid-19" of December 21, 2020, published on the very day that gave the green light to the "vaccinations" when the EMA issued the first  Covid preparation granted provisional approval in the EU.  Already at that time there was criticism that the Church was serving secular power.

The note from the Congregation for the Doctrine of the Faith made three points: It gave the green light to the Covid injections by criticizing the use of aborted children to produce the genetically modified preparations, but declaring health to be a greater good.  The third aspect, on the other hand, is mostly suppressed, in primis by the bishops, for example the bishops' conferences of Austria, Italy or the Federal Republic of Germany: the Congregation for the Doctrine of the Faith at the same time stated that vaccination could not be compulsory.

Archbishop Viganò wrote to the military bishop, who defended compulsory vaccination and described criticism of the Corona measures as fake news:

"If the military ordinary thinks it's right, and it is that fake news needs to be refuted, the first thing he should do is examine the validity of his claims about the efficacy of the gene serum, which are based on incomplete tests (since testing of the drug won't start until next year  ends), tests conducted by pharmaceutical companies or drug agencies sponsored by them, whose officers often have a serious conflict of interest.  Also, the publications about clinical trials are paid for by the drug companies themselves, as are the 'scientists' conducting the trials.”

State bodies that go beyond the already dubious and thoughtless recommendations and guidelines of the EMA and WHO are even more dubious.  According to Archbishop Viganò, this includes, for example, approving a third and even a fourth dose of the “vaccine”, although even the EMA advises against it.

"The claim that vaccination is 'not just a duty but an 'act of love' is therefore fundamentally wrong, because the vaccinated serum is not a vaccine, is not effective, has short-term side effects that can be serious and even fatal, such as  confirm the VAERS data, and long-term effects that are still unknown.”

Pope Francis had described the attitude of critics of the Corona measures, who reject treatment with a genetically modified Covid preparation, as "suicidal negationism".

"In recent weeks, journalistic research by a Catholic American newspaper has uncovered Bergoglio's repeated meetings with Pfizer's CEO, as well as Pfizer's and Moderna's sponsorship of Vatican meetings on the pandemic.  This serious conflict of interest by the Holy See deprives its pronouncements in favor of so-called vaccines of the necessary impartiality and demonstrates the extent of BigPharma's power over authorities and institutions worldwide, including the Holy See and almost the entire Catholic hierarchy.”

Pope Francis had described the attitude of critics of the Corona  measures, who reject treatment with a genetically modified Covid preparation, as "suicidal negationism".  The Military Bishop agreed with the Pope's opinion, which is why Archbishop Viganò replied:

"So, if there is a 'negationist' attitude, it can be seen in the Holy See's pro-vaccine propaganda, citing evidence of their immorality because of the presence of aborted fetal lines and the effects of the genetic alterations affecting the serum in human  DNA of the vaccinated is deliberately covered up, its ineffectiveness denied and its dangers concealed.”

This is happening because the Holy See is clinging to the figures that are being disseminated by the official health authorities, but the reliability of which has to be called into question “by numerous pieces of evidence”.

In the face of “the deafening silence of the system media,” said Archbishop Viganò, “we would have expected an alarm call from the Church to give a voice to the 38,983 dead and 3,530,352 injured by the Covid vaccines registered by EudraVigilance.  Because it is about people, about people, with children, parents, relatives, friends, work, ambitions, who are seen as negligible victims on the altar of a common and absurd suicidal 'love act'.  In fact, we are at a point where human sacrifice is being justified in the name of a majority interest that is disturbingly reminiscent of the collectivism that reigns under the Chinese dictatorship.”

"Following Bergoglio's silence on human rights abuses and the persecution of Chinese Catholics loyal to the Church of Rome, the hierarchy is now conspicuously silent on the hellish plan of the Great Reset and the global expansion of communist China's social credit system."

“Any dissenting voice is systematically excluded and censored because of this network of approval and commercial interests.  The Military Ordinary's statement joins the chorus of conformism and willing submission to the system, limiting itself to dismissing as 'conspiratorial' any opposition, even when supported by official evidence.

In conclusion, Archbishop Viganò made a serious accusation:

“The words of Msgr. Marcianò confirm the existence of a Deep Church that is in bondage to the Deep State.  Even if they completely misrepresent the content of my statements, the members of the armed forces and police will understand that the sole concern of their Ordinary is not to protect their health, much less their eternal salvation, but to slavishly obey the orders of the globalist oligarchy  obey, whom Bergoglio, what a coincidence, considers one of her best allies.  That should be enough to form your own opinion on the matter.

Vigano is as reliable with this as he was when "God told him" that Trump was going to win the Presidency.


And why hasn't he spilled all of the dirt that he claims to have on various characters in the Vatican?
And don't tell me that his alleged assassins have been unable to find him in the past
4 years. That assassination squad must work 2 days a week, out of Podunk, Mississippi.

Stay down, Marciano. Before Vigano knocks you on your ass again.

Trump did win. Something stolen does not belong to the thief.
Those who disagree are either malicious as liars or grossly ignorant

Trump did win, so what's your beef? Trump has been president continuously since January 20, 2017. He will soon emerge from eclipse.

Gaybriel is upset because Abp Vigano has a better record for sanctity, veracity and foresight than he. But then, so does a goldfish.

To the 1st anonymous commentator, you cannot counter what he said, so you make pathetic attacks on the man.
God bless Archbishop Viganò ! He speaks the truth. The truth, the whole truth, and nothing but the truth will eventually come out some day. Thank God for Archbishop Viganò! His words will stand the test of time.

To the 1st anonymous commentator, you cannot counter what he said, so you make pathetic attacks on the man.
God bless Archbishop Viganò ! He speaks the truth. The truth, the whole truth, and nothing but the truth will eventually come out some day. Thank God for Archbishop Viganò! His words will stand the test of time.

Of course, I can counter what he said.
Biden is occupying the White House.
To put it bluntly, you are "thick".

Gaybrielle with the fake news, again.

"Biden is occupying the White House."
'occupying' is correct. Kinda like begoglio is 'occupying' the seat of Peter.
Kinda like squatting, armed crooks may 'occupy' the house of the homeowner.
Kinda like Soviet soldiers 'occupied' other countries.

You're very like Balaam and Caiaphas, feybriel....though you usually speak lies with your forked tongue, once in a while you are used to speak a salient truth.

Why don't you go and 'occupy' a bathroom?

Nice posting. The "goldfish" comment was great as was the allusion to Rocky Marciano.

The "goldfish" is a reference to Wanda, Popeye.
No wonder the Trads are stuffed.

Imagine being so freeze dried and senile that you try to score points with references to a lame boomer movie like A Fish Called Wanda. 😂

Archbishop Vigano should receive conditional Episcopal Consecration from a valid Bishop,and lead one of the roadblocks in Canada or in another country in Europe by praying the Holy Rosary with citizens.
We all love what he says but to talk of tradition,and annulling V2 without valid Consecration as a Bishop makes his words lose force.
If you disagree I understand.