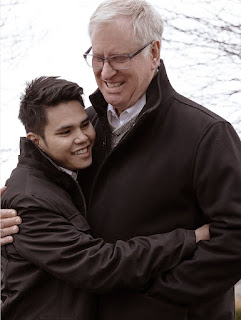 “Conservative” Pundit and his boy “husband”, which he scored in the Philippines. The Duterte government should protect its citizens from vile predators like Jim Hoft.

Edit: anyone can put up a website and post clickbait articles to distract a particular political group from what’s going on. This has particularly been the case with aberrosexual Michael Voris, whose venom has been leveled at the SSPX and now at the Mystic Monk Coffee guys.  He’s been showing an improved aptitude for attacking Catholics beyond calling them out for not being loyal to Bergoglio, or supporting the SSPX.  Doxing and revealing embarrassing distorted or untrue information to the public eye is something he’s been perfecting in his new alliance with Bannon disciple, Milo Yiannopoulos.

Like Cuckoos, these aberrosexuals mimic conservative points of view, but lay their ideological eggs in the nests of true conservatives in hopes that others will nurture, protect and develop their false ideas. By the time the Cuckoo chick has hatched, it attacks its nest mates.

Another such fraud is the sodomite Jim Hoft who runs the Gayway Pundit.  We’ve cited a lot of his articles, just as we’ve defending Voris and even applauded some of Voris’ investigative journalism against evil aberroclergy.  Yet Voris spends a lot more time doxing online traditionalists engaging in citizen journalism by exposing them to real-life hardships for their troubles, like being fired from jobs.  The same is the case with Jim Hoft, who is attacking Patriot Front and engaging in a lol-suit against a conservative content creator, Stew Peters.

Having said this, I think it’s in the public interest to expose Voris and Hoft if they are a viable threat to minors.  Anyone with information about Voris, please contact the police, and then send the information to this blog.

Voris has been attending Mass in the Detroit area for years with a man at his side. Is this man his “boyfriend” or “husband”? Voris says he hasn’t had sexual intercourse for a decade, but he’s lied about other things. Still, it’s interesting that even this admission places his aberrosexual activity in the midst of his ministry as he was hosting cruises and ramping up Church Militant.

He has enough enemies that if he is still diddling around with men, it will be revealed.
Just a matter of time. I will bet that there are plenty of eyes on him.

I have no idea what "anyone with informs to ok another them" means.

I'm, sure I'd be all for it, but you might wanna clean it up so we know what we should be doing.
Stew Peters is, and has been, doing some of the FINEST work on the planet exposing demons and bastards....I'll be praying the Imprecatory Psalms with great gusto against his (and Patriot Front's) enemies for the foreseeable future.

Typo, thanks for catching that!

Pornography and other moral disorders are greatly over represented in the conservative and ultra right wing sectors of the Catholic Church.

FWIW I don't really trust Stew Peters either. Ever since he ran that story of a Delta flight that was diverted because the vaccinated pilot had a stroke. It was easy to verify and he never did. Another grifter I bet. And I stopped with CM too.

"....the same ethnicities promoting...."
So, having established that you read dirty magazines from abroad and are given to some nasty habits, what else do you have to say, Tucker?

It’d be a shame if you had to be accountable for calumniating people.

"It’d be a shame if you had to be accountable for calumniating people."
You can have that with your breakfast tomorrow.
What a performance old chap.

Acting and pretending is more your line, I think.

As a Navy veteran, I have great respect for the Philippine people. There are a large number in the Navy. They obtain citizenship by acting as stewards. Look at what they did for the U.S. in WWII.---They are typically strong Catholics and good family people. Duerte is basically a fascist. This "conservative" with a Philippine boyfriend is very troubling.---The entire state of South Carolina is one diocese. There are now one percent Catholic in the whole state. That is because the Charleston Naval Base shut down after being destroyed by Hurricane Hugo in 1989 with a direct hit coming up the Cooper River at 140 mph.---Philippinos went elsewhere with the Navy and the Catholic population of South Carolina dropped accordingly. While stationed there, I would go to Mass off base. Half the congregants would be from the Philippines.

"Acting and pretending is more your line, I think."
You have turned this into a cottage industry, old chap.

Please, Faybrielle, tell me how profitable this is for me.

Whatever happened to "Pause" the program Gary Voris set up for young men shortly after he was outed?

How does one post on her pictures of Michael Voris with his "husband?" I can't even post a photo bucket link.

Do you have such pics I can send to Budgie?