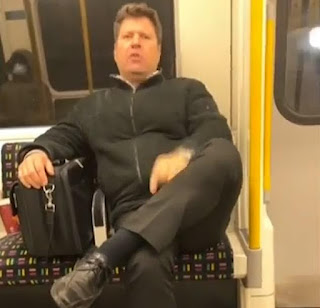 Edit:imagine having your life destroyed, being arrested for being annoyed with some nabob blathering in a his ugly, guttural language and being as discourteous and vile as this Muslim. It’s a sign that Muslims are not only becoming more numerous in England, but they’re aggressively moving to control public space, and have the police and media on their side as well.

I can’t wait till they start going after Jews.

[Daily Sharia] Footage captured near Monument station in central London shows the furious man tell the Muslim passenger he has 'no respect for other people' as he quietly [it’s not that quiet] recites the Islamic holy book [it’s not holy. Presumably, whoever wrote this piece is a fuzzy or some other foreigner who is an Infidel.] at 6.40am on November 27.

It would be a shame if people called the line and asking for the Muslim to be deported for being annoying.

Going after Jews? Whoa! Who do you think are sending the muslims after us?

SEE: Vatican II Declaration of Religious Liberty.
Also, this man should " counter attack" with a loud Rosary in hand. THAT WOULD BE THE APPROPRIATE.
But also: I've seen "gangstas" rappers and ghetto people speak loudly. WE would have to scold them too.

Ok, blacks should have their own buses, then?

Welcome to a world ran by Jews.

I’d love it if you or some of your dear relatives were in a highly subsidized and diverse neighborhood on benefits, but I doubt you do. If it weren’t so horrific, it would be fitting if one of your female relatives were sold by groomer darkies for a pack of smokes.

I’m not surprised Constantine is scandalized by this, but these kinds of public nuisances would be ameliorated by the deportation and repatriation of non-European populations in Europe.

Meanwhile, in France, anti-immigration candidates are poised to win big. People are frankly sick of these aggressive interlopers, who make it difficult for honest hard working people to go about their lives by poisoning the society by their passive aggressive and oftentimes violent acts committed with impunity. Don’t mention it, either, because you will be jailed for incitement of religious hatred or some other non-sense law.

Prove that you can offer something besides bedwetter theology and childish pablum, Gaybrielle.

Data point regarding the comment about Saracens going after the Jews:

Gladys, aka Tancred, comes to the rescue just in the nick of time. But terrible foot work.

Gaybrielle, with a terrific own goal!

Only at midnight, when noisy Darkies should be asleep.

We all know how resentful you are that your parishioner the old widow Mrs. Harris died having left you out of her will. But now you must attend to the three octogenarians that you have left on the parish registry. Get that faggot in the choir loft to play On Eagle's Wings for you. That might lift your spirits. You've got a Church to destroy: come on, old girl!

At the risk of jarring Gaybrielle in his already fragile mental state and delusional thinking, I do declare that the above comment was mine.

A Gladys would say that.

Ok, QED. Thanks for trying to make everything about you, petty narcissist.

Thank you Gladys. The sentiments are mutual

A day in the life of Gaybrielle:

9:35 am drags gay-backside out of bed, and gulps down a splash of Vodka before heading to the day's novus ordo funeral. Forgets to feed his cat.

10:20 an Tries to make sermon sound relevant, then sees the looks on faces and remembers that no one is listening anyway.

12:17 pm Guitar lady doing the responsorial psalm reminds him of his mom, intimidating him, so he never talks to her other than to say yes to whatever she wants. Today she wants a new guitar. Gaybrielle says, yes.

12:35 pm late for more Vodka. Strokes hungry cat, whom he has named Streisand

2:30 pm Receives email from local ordinary who has increased his annual taxation, also known as the Annual Giving Fund. Pops an oxycontin.

3:45 pm Updates spreadsheet listing of registered parishioners, which has hundreds more dead registrants than living. E-mails the list to the local bishop, telling him how vibrant and lively his parish is.

5:45 pm Texts his special young friend to go out for drinks, but the catamite has a better offer. Vodka for dinner. Seeks out Streisand as a comfort animal, but she hides under the couch.

10:45 pm Puts Pink Floyd's Great Gig in the Sky on loop and falls asleep with Streisand the cat hopping atop him for its late night grooming.

That one was mine.

I view Gaybrielle as more of a Tull and stout gal.

I’d love to read, “Diary of a Country Presider — Or, at the Pub Again With Gaybrielle”

The Muslim bashing gig is not working is it, chaps? In fact, all the posts, mostly dud anti-vaxx dreck, are a dead as maggots. Speaking of, your Texan colleague, the Daystar Hebrew Christian, Marcus Lamb has turned up his toes. Ironically, it was COVID-19 that finished him off, just like a string of other media freaks who made a recent career move into the anti-vaxx industry.
Tell em all about it Tancred.

They lend themselves to bashing.