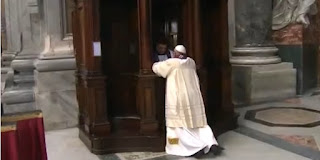 Pope Francis vigorously defended the inviolability of the secrecy of the confessional at meetings with the heads of the Dicasteries.

(Rome) On November 8th there was a meeting between Pope Francis and the heads of the Dicasteries.  The head of the Church strongly advocated the defense of the seal of the confessional.

On November 8, the Vatican Press Office published a short message in the daily bulletin:

"This morning the Holy Father Francis presided over a meeting of the heads of the Dicasteries of the Roman Curia in the Apostolic Palace of the Vatican."

Such meetings are always announced after the fact.  You don't learn anything about the content.  But now Franca Giansoldati, the Bergoglian Vaticanist of the Roman Messaggero, reported on this.  She has a good connection to the papal suite.  It can therefore be assumed that her “unveiling” is desired by Santa Marta.

According to Giansoldati, the papal message to the Roman Curia was clear.  This message should also be heard publicly:

"The confessional seal also applies to the priests who have committed abuse."

Pope Francis told his senior staff that he was determined to oppose any pressure that urges the revocation of the confessional seal, including sexual abuse of minors.  The confessional seal is a unity and inviolable.  Giansoldati quotes the Pope verbatim:

“The confessional secret is sacred and inviolable.  It is a point that will remain irrefutable and incontestable.  I am ready to use all my magisterial weight to defend it ”.

“With these words the Pope created a solemn atmosphere in the room in which he met his closest collaborators in the Curia at the recent meeting of the heads of the Dicasteries.  Francis summarized the recent disputes before the cardinals and bishops present. "

Specifically, it is about a diplomatic controversy between France and the Holy See.  In connection with the investigations against pederastic clerics, not only in France are prosecutors and judges hoping for more efficient criminal prosecution by lifting the confidentiality of confession.  The background to this is the shocking revelations about the extent of the abuse scandal in France.  Although these are only estimates and a period of 70 years, the extent remains enormous despite all the drawbacks.

Judge Jean-Marc Sauvé told the bishops that the way to eradicate the abuse is to abolish the secrecy of confession in this area.  He sparked a heated debate, which led Prime Minister Jean Castex to address Pope Francis in a private audience on October 8th.

Even then, Francis made it clear to his guest that the discussion about it need not even begin, because it was out of the question.  The confessional secret cannot be split up according to deeds.  It applies always and without restriction.  That could not be shaken.  Any violation of the secrecy of confession is a sacrilege and therefore cannot be compared with a secular professional secret or state official secret, which, under certain conditions, could be revoked or released.

Cardinal Vincent Nichols, Archbishop of Westminster and Primate of England and Wales, had already declared before the independent commission of inquiry into clerical abuse in his country:

"The priests would rather die or go to prison than break the confessional secret."

One should have "just listened," added Giansoldati in her article.

Three years ago the Apostolic Penitentiary informed the Royal Commission that the Church would cooperate in any way to combat and prosecute pederastic offenders, with one caveat: the violation of the secrecy of confession is exempt.

The chairman of the French Bishops' Conference Eric de Moulins-Beaufort had said after the publication of the shock report under the impression of public outcry that it was now necessary to bring the nature of confession "in harmony" with the need to protect the children.  Pope Francis apparently wanted to make it clear what could not be meant by this.

On November 26th, Pope Francis will receive French President Emmanuel Macron in audience.  In this context, attention is also drawn to the simmering controversy.

Let's say a pedo priest confesses, receives absolution, and then on the way out, the pedo gets a bullet at the base of the skull.

-One less recidivist risk walking the earth, and the criminal gets his best shot at escaping hell.

I’d settle for a punishment of hard labor and supervised hermitage someplace on a remote island on a large Canadian lake.

I have wondered how close to home all of this sex abuse of Minors is to Frankie the Great?
South American secrets??