Edit: it’s nothing short of hypocritical that this mentally deranged and degenerate person is expressing outrage about the victimization of children when he/she/it is a disciple of the notorious pederast, Michel Foucault.

It wouldn’t be shocking if he were Jewish, now, would it? 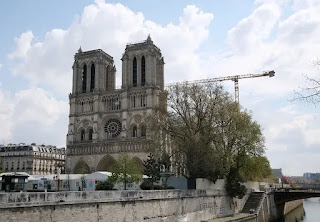 The “philosopher” evokes in particular his wish to see the cathedral of Notre-Dame de Paris be withdrawn from the Church ... Photo © CHINE NOUVELLE / SIPA

[Valeurs] On October 5, as reported in a previous article, the former vice-president of the Council of State, Jean-Marc Sauvé, published a report concerning child crime in the Church.  According to information from La Croix, the said document, ordered in 2018, highlights shocking figures as to the number of victims recorded between 1950 and 2020. A number which could rise, in France, to 330,000 people.  It is in this context that Paul B. Preciado, a Spanish writer and philosopher formerly named Beatriz Preciado, published an article in Mediapart on Tuesday, October 12.  There he/she/it developed in particular his/her/its wish to see the cathedral of Notre-Dame de Paris be withdrawn from the Church by the French State ... So that the space is transformed "into a center of reception and research feminist, queer, trans  and anti-racism and the fight against sexual violence ”.

According to him, this center could then be baptized "Our Lady of survivors of child crime".  Which, in his own words used in the pureplayer, is by no means "blasphemy", but rather "a revolution".  In the same article, Paul B. Preciado goes on to argue that "the process of bodily and cognitive emancipation which is taking place these days involves the deepening of the separation between Church and State".  For him, while it is true that the Church no longer owns all these buildings, "she retains moral possession and symbolic domination of spaces".  However, argues the philosopher, these should belong to citizens, as well as to "victims of ecclesiastical sexual violence".

Towards "a process of impeachment of the Church"?

Also in Mediapart, the writer analyzes sexual violence as "a systemic practice of the ecclesiastical institution".  He then referred to a "Christian tradition lauded by the far right as the foundation of Aryan Europe", before shortly after criticizing "a tradition of masculinism, racism and sexual abuse of children and women".  And to conclude, in these terms, to summarize his way of thinking: "If sexual crime is not an accident, but the very architecture of the power of the ecclesiastical institution, then it is necessary to demand a process of  dismissal of the Church ”.

Can we demand a process of dismissing the synagogues?

"There is an “astonishing” amount of sexual abuse in Jewish circles."

Babylonian Talmud Sanhedrin 54b condones man-boy rape, as long as the victim is less than nine years of age.

Babylonian Talmud Ketuboth 11b condones man-girl rape, as long as the victim is less than three years of age (young enough for her hymen to grow back and cover up the crime).

Is this all a "kick in the head". The loonies have escaped from the bin. What was viewed as abnormal in the DSM Manual is now viewed as normal. ---The Argentinian today praised BLM protestors/rioters as examples of "the good Samaritan".

This is yet another example of the left's soft totalitarianism.