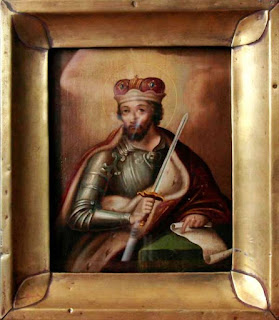 The transfer of the image from the collection of philanthropist Mikhail Abramov, who tragically died in August 2019, was timed to the celebration of the 800th anniversary of the birth of the prince, which is celebrated this year, according to the museum's press service.
The icon "Saint Blessed Prince Alexander Nevsky" was painted in the late 18th century in Russia in a mixed technique. St. Alexander Nevsky on it is represented sitting at a small, covered with a green cloth table. In his raised right hand he holds a hilt of a naked sword, with his left hand he supports a scroll opened on the table, pointing at its text.
https://russian-faith.com/news-saints/crew-russian-submarine-received-rare-icon-alexander-nevsky-n5584
AMDG
Posted by Tancred at 7:25 AM

The Russians have become increasingly devout, and loyal to their religious traditions. During WWI, Russian ships had icons, as well as photos of the Czar .

After the Soviet UNion fell and Putin came in, there was strong rumors ( coming back again), that Putin wants to re-instate the office of Czar in Russia, not with the old title of "Emperor and Autocrat of all the Russias", but simply as a "king", in the mold of the British.

I'm a monarchist at heart and would like to see the Czar back (especially from the still existing Romanov family). Likewise, I would like to see a King or Emperor back in Greece, Romania, Serbia, Croatia, Poland, Austria, Hungary, Italy, Portugal, Ethiopia, France, Iran, Iraq, Egypt, and Brazil and Mexico (both of which had, until the 1880's, Emperors)

It seems (especially in modern history), that when a monarchy is overthrown and a "democracy" is put into place, there is a downturn in the economy, and political corruption and instability. Italy has had close to 60 changes in government in 70 years. There's been at least 10 changes, including military coups, in many. Countries which went from monarchy to Communism are among the poorest now in the world (Bulgaria,Romania, Ethiopia).

Afganistan once (close to 50 years ago), had a king. The Russians were influential in deposing him. But if there was still a king there now, I would not be surprised if we would not hahve had the disasters that are there now. Biden/Harris are on their way out over that collapse and disaster.

As a Navy veteran, I visualized right away "The Hunt for Red October". Before the Bolsheviks and subsequent visit of the Mother of God, Russia was a Christian Civilization. It was a rebellion from the followers of the Sadducees who killed the Christ who brought in atheism.----Who knows what Putin is really thinking. Is he truly Christian or is he fronting for the anti Christ? The KGB still runs the Orthodox Church.----Nevertheless, compare that to what is happening in America. Malachi Martin read the Third Secret in the original Portuguese. He stated that Russia and Ukraine are mentioned by name in the true document.