Voris is Mad About Mean Words! 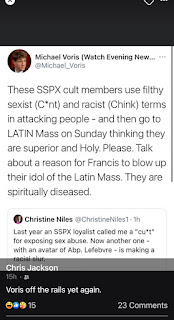 Somebody called me a bad name. Kill the Real Mass.

That is a nice summation of how those extremists "think."

He shares a lot in common with Frances.

I> Somebody said something bad about me therefore the Holy Holocaust, an act of incomparable beauty and the greatest source of salvific grace, must be destroyed.

That is not Church Militant, that is Church Diabolically Destructive and far worse than anything that any actions those weirdoes criticise

Voris ìs a bundle of sticks. Or he lived as one for a decade. Doik!

Voris is such a tough guy and is very masculine. I bet he's a top!

Voris made a veiled threat against the SSPX: "Blow Up their Latin Mass"

Interesting point there. He has also never address whether or not he engaged in pederasty which is common among predatory "tops."

Dave, I'm thinking when you are cruising for action in the village, checking ID's and dates of birth are not really a top priority. By his own and very public admission he lived the life of a gay man for over ten years, I believe in NYC. Certainly only God knows if he is destined for Hell, but I'm thinking his current public persona does not fit with somebody who is repentant. Conservatively he had to have been with 100+ men and easily 10X that, he is culpable for those poor fellow sins as well as his own. He did say he 'lived the life' not that he tried it for a long weekend. Voris like all of us must work out his salvation, but this almost silly anger toward the SSPX is absurd. The lady doth protest too much, methinks.
Lets pray for him, he probably needs to wear diapers. Even his word choice on what Francis should do, seems a bit . . odd. His Connie Chung knock-off is clearly his tool, charmed by his cattiness. She defends his hair piece for heaven sake. She knows his hair looks like a piece of lettuce, just like everybody else.