Does it always have to be about the Joos? 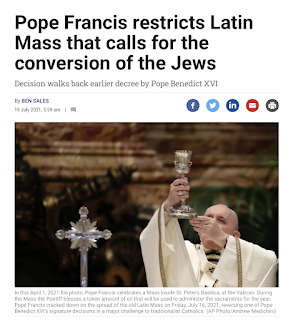 https://tinyurl.com/jewshatetlm
Posted by Stop Voris at 7:08 AM

The part of the Mass calling for the conversion of the Jews was suppressed pre-VAtican II by John XXIII in a solely personal intervention. To bring it up again after 63 years is assinine.

Bogus report from the usual suspects who can't lie straight in bed.

July 29, 2021
Pope Francis is not magisterial on Amoris Laetitia and Traditionis Custode: Mundalein seminary and Bishop Robert Barron must acknowledge the error

The Mundalein seminary, Chicago interprets Vatican Council with the false premise instead of the rational option and there is no comment from them or Bishop Robert Barron and the apologists at Word of Fire.

According to Vatican Council II, Rahm Emmanuel the former Mayor of Chicago and Biden’s Ambassador to Japan, is oriented to Hell without faith and the baptism of water in the Catholic Church.The Council says all need faith and baptism for salvation (AG 7).He does not have it.Ad Gentes 7 is placed in the Catechism of the Catholic Church n.846 under the sub title Outside the Church no salvation.

With hypothetical cases of LG 8, LG 14, LG 16, UR 3, NA 2, GS 22 etc in Vatican Council II there are no objective exceptions to AG 7 in 1965-2021.We cannot see or meet someone saved outside the Church.There are no practical cases of being saved as referenced in LG 8,LG 14 etc.No one in Chicago knew of someone saved outside the Church without faith and baptism .

There are no known cases of people in Heaven with the baptism of desire(BOD) or invincible ignorance(I.I) in 2021.

Cardinal Cupich, the archbishop of Chicago appointed by Pope Francis, like the faculty at Mundalein seminary continues to interpret Vatican Council II with the false premise and so remains politically correct with the Left.

But this is unethical and not Catholic.

I accept the BOD and I.I as always being hypothetical.The book, Bread of Life, indicates that they were also hypothetical for Fr. Leonard Feeney.

I do not have to reject BOD and I.I ( speculative always) to affirm ‘the strict interpretation’ of extra ecclesiam nulla salus(EENS).BOD and I.I can only be speculative and never objective for us human beings.So being theoretical it is compatible with EENS and the need for all to practically have faith and the baptism of water to avoid the fires of Hell.

So BOD and I.I never ever were an issue.The Letter of the Holy Office 1949 to the Archbishop of Boston(LOHO) made it an issue by confusing what is invisible(BOD, I.I) as being visible.

Fr. Leonard Feeney’s excommunication was lifted without him having to recant.The CDF knew that it had made a mistake.Since the Athanasius Creed states, like Fr. Leonard Feeney, that all need Catholic faith for salvation.This was the Creed of the Catholic Church for centuries.

Cardinal Cupich and Mundalein seminary could acknowledge that Pope Francis is not Magisterial when he uses a false premise to interpret Vatican Council II . Amoris Laetitia and Traditionis Custode were issued with this error.So they cannot be Magisterial.The pope needs to correct the mistake.He has issued these documents based upon Vatican Council II interpreted irrationally, with a fake premise.Only in this way could a hermeneutic of rupture be created with Tradition( Athanasius Creed etc).-Lionel Andrades
http://eucharistandmission.blogspot.com/2021/07/pope-francis-is-not-magisterial-on.html