It’s Now Illegal for Aberrosexuals to Groom Children in Hungary 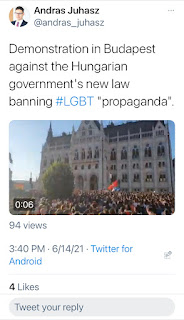 [Summit News] Hungary’s National Assembly has passed a law that bans showing children under the age of 18 material related to homosexuality or transgenderism in education, on television, movies or in advertisements.

The vote passed earlier today by a huge margin of 157-1.

“The law was included in a larger bill cracking down on pedophilia by creating a register of child sex offenders, implementing stricter punishments for child pornography, and barring pedophile offenders from jobs where they would encounter children. It also singled out the promotion of LGBT affairs in schools,” reports RT.

At least there is one sane country in the world. I'll bet Bergoglio and his Vatican are having hissy fits because it doesn't fit in with their agenda for the world, or for Catholics. Don't expect Bergoglio's VAtican to applaud them for maintaining CAtolic/Christian principles of morality. Just the opposite. I'm sure they are whining that it's racist, etc.

This is yet another illustration of just how morally bankrupt and attention deprived Tancred really is. This turgid little piece is crass check out fake news.


Yet another example of Gaybrielle’s desperate histrionics and attention seeking. Surely this is a man whose productive years, if ever there were such things for this dilatory nonentity, are long gone. All that’s left of him is the obsessive desire to make irrelevant comments on a small blog about Catholic things. You must be resentful of those who have the Catholic faith and wish them ill.

What is the name of the person who voted agent this?

Hungary should insist that sodomites maintaining a safe social distance between their own penis and the mouth or anus of another sodomite.

God bless Hungary for somehow maintaining their Christian faith and for protecting children and young people. What a disgusting world. People should know, it's now OUR responsibility to make sure our children are not exposed to pornographic grooming at their schools, libraries, etc. Never assume. Librarians are so called "media experts", and they can be more "progressive" than anyone else. Know who is speaking to your child and about what. Look at curriculums, all of it, and demand to know when there are assemblies and what the topic is about, or someone coming in to speak to the class, or what kind of "counseling" they are getting. Parents better be on guard and make sure your school board and superintendent know your position. Organize with others. Be professional, but be adamant. Contact MassResistance, the know very well how to confront the LGBT crowd.

The Amateur Brain Surgeon obviously has some form in this honed, no doubt, from years of personal experience.
Spare us the grubby details of your fantasies.

Gaybrielle, why are you catamites so unoriginal? It’s always the same tired old repertoire.

Pull your head out of your ass, Tancred. The view will improve instantly.

and once again feybriel shows his obsession with all things ass.

His low-effort contributions are like the obsessive mattering of a vicious seven year old Torah scholar.

The knuckled draggers don't like change in their own currency.

Hungary must be one of few nations on the planet that is not under the control of the US deep state.

Dear Mr. Lobo. One presumes you are opposed to cannibalism but according to your "logic" that must mean you are a closet cannibal.

Are you a traditional christian who does not eat dead men on friday?

"One presumes" Who is 'One'? And, have you stopped telling lies yet?

Canada is the exact opposite of Hungary.