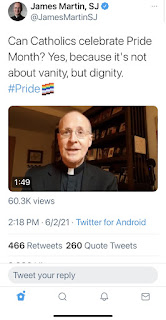 Father Martin is a PITA in more ways than one.

Isn't it redundant to use "evil" and "Jesuit" in the same sentence?

'Isn't it redundant to use "evil" and "Jesuit" in the same sentence?"

"https://cognitivegateway.wordpress.com/4637-2/" Is this bottom crawler sede vacantist bilge the best you can do, Gladys?

You are a reprobate priest and shameful sodomite. Trolling on the internet while drunk is an inappropriate means to distract yourself from your thoughts of committing suicide.

Go to confession (and not one of your coddling, effeminate, fellow novus ordo faggot priests, either). Find an actual Catholic priest who is not a heretic. Resign the clerical state. Undertake a life of penance. Pray the Holy Rosary to the Blessed Virgin. Your time is running out before your will be condemned to hell forever.

I am told repeatedly that there are some "good" Jesuits.
I have noticed that none of the "good" ones (such as Mitch Pacwa) ever speak up to condemn the blatherings of James Martin.
The Order should be disbanded immediately. The "good" ones can work as diocesan priests in parishes. The other ones can go and wait tables at gay establishments.

"Your time is running out before your will be condemned to hell forever." Gladys is not content with being the resident whining moralizer, she now claims to be God. A big round of applause for Gladys on the promotion.

"I am told repeatedly that there are some "good" Jesuits.
I have noticed that none of the "good" ones (such as Mitch Pacwa) ever speak up to condemn the blatherings of James Martin.
The Order should be disbanded immediately. The "good" ones can work as diocesan priests in parishes. The other ones can go and wait tables at gay establishments."

=============
Great oberservation and comment by James! One of our family priest friends who is a Servite (OSM) from Chicago (and he's 81), said that Pope Paul VI considered granting the requests of several dozen Spanish Jesuits a few years after VAtII when they requested founding an "observant"/traditional branch of the Jesuits when they saw the collapse of the Order already in 1968. He considered it, but in the end ruled in the negative under pressure from his liberal cardinal lackeys in the Vatican who said if a dissatisfied bunch of Jesuits wanted to found this, other Orders might as well, and that would create confusion and disunity in the Church. As if it wasn't already happening large scale by 1968!!!!!!! Too bad he listened to them.
On the other hand, JPII was pressured in the early 1980's (right after he survived the assassination attempt), to suppress the Jesuits. Instead he just changed the leadership.

You stole Holy Orders and your priesthood is a failure. Your crimes cry out to Heaven for vengeance. You can pretend in the dogma of non-judgmentalism if you must, but those who want to play pretend with you are aging and dying.

Your rabbinical twist on the woman caught in adultery is an absolute joke: just like Jew/Jesuit James Martin, you opine sanctimoniously about how faggots are like that woman, but you skip over the repentance.

The woman caught in adultery was contrite. She wasn't waving a faggot pride flag in Catholics' faces. Are you contrite, or pertinacious? BTW, I don't know about your religion, but in the Catholic Church, admonishing the sinner is a corporal work of mercy.

You are welcome. Do try and escape hell.

I remember the name "
Gaybrielle:" but was it ever determined who it actually was, or a priest? I remember a
Gaybrielle I used to argue with here on this post, but that was when I first started, about 3 1/2-4 ago. I do it more than I used to because I have a desk job (and use my pc, not work computer). I'm only 33, and used to be on the road 6-7x per year for 5-10 days at a time on photo shoots etc with my team....but COVID-19 from Wuhan China blew all the projects away except for a few local (NYC, LA, Philly, DC), but now I was "promoted to a desk job as a manager of multiple teams and 4 agents. More prestige, but surprisingly less pay than doing shoots and promos :(
But I remember a Gaybrielle who was always very good with the nasty, snarky, sarcastic remarks. I always labeled him as gay, because that's how a few who are act at work in the office. They even talk back to supervisors. Like me. Anyone else doing that would be canned in 10 sec., but because they're LGBTQ who we now have to bow down to, they get away with everything.
But I always labeled him as a frustrated gay guy....or maybe a frustrated dissident radical liberal gay priest in Great Britian

I forgot to mention, also I picture
Gaybrielle as being a priest of about 60-70-----the usuall age and older for the typical angry dissident radical liberal gay priest (like Fr. James Martin).

And most unfortunately, because of age, is approaching death.
Perhaps going out bitterly because the great "PRIDE" life and it's promises, gave him the go-by.
Homosexuals worship youth. They want nothing to do with old queers. Gay sex is meaningless when you are 70. You are reduced to crawling around public parks and restrooms begging to be noticed. The "PRIDE" is gone. Nothing is left for you but a bowl of ashes.

Yet even with all of this, there is repentance. The Lord can open eyes and hearts at any age.

"Gay sex is meaningless when you are 70. You are reduced to crawling around public parks and restrooms begging to be noticed."

Thanks for the personal backgrounder James. I hope you get help to dig yourself out of this and enjoy peace in your declining years.

Typical homo.
The worst insult that they fling at their adversaries is "If you're against us, YOU must be gay".
Proof of their degenerate self-hatred.

"If you're against us, YOU must be gay".
That's the lingua franca of this board, Jimmy lad. The spineless Tancred and his closest acolytes used it as a blunt instrument for years. When the busted logic and ideological horse shit are thrown back you can't handle it so you retreat into you confected exceptionalism and sulk like a sissy.
Still keep working on the deviant behavior, Jimmy.

2:25am
I would be remiss if I didn't point out to you that Our Lord and His Blessed Mother are there for you. Ready to welcome you. All it takes is a repentant heart. Give it a try.

Hurling insults with a patina of psychological jargon dating from the 50s, and various self-serving inuendoes isn't ideological horse manure?

At least horse manure is useful, your toxic self-adulation and obsessive fixation is an enormous waste of resources.

Too bad you can't actually get around to addressing the substance of people's concerns, but you're addicted to being what you are.

feybrielle is the personification of arrested development and emotional incontinence.

Evidently, he's blind to his party's foibles. Vanity is a centerpiece of the lifestyle. We have ample evidence of that in the presumptuous. mentally club-footed Gaybrielle.

I wonder if the reason Gaybrielle wastes so much of his time here has to do with the scorn of fellow aberrosexuals for being an aging, sagging twink?

Another self-declared victory by the vainglorious ghey.