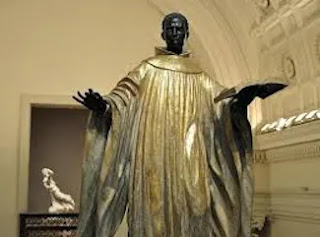 He was born in Sicily, the son of African slaves. He became a Franciscan. Although he was only a lay brother and could neither read nor write, his holiness was so outstanding that he was made superior of his monastery, which he governed wisely and well.

And a most blessed Easter to Tancred and all readers here of good will.

Whats with this Eastern Rite stuff? Easter for you guys is May 2 this year
Keep up the Fasting...