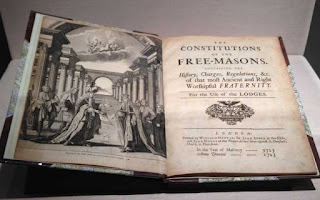 The Freemasons strive to overcome the European nation-states as a stage towards a world republic, the world-unit state.

Professor Gianmario Cazzaniga, a scholar esteemed by the Grand Orient of Italy, explains how the idea of a World Republic between the 17th and 18th centuries was prepared by a Republic of Scholars and Scientists, that is, by a cultural network of writers, nobles Writers, publishers, antiquarians and scholars, which was promoted by Huguenot circles, by Protestant (but not only) financial sectors in Geneva, Amsterdam and London, and from 1717 by the Masonic lodges. 1

The French scholar Yves Hivert-Messeca also affirmed that the Freemasons in the 18th century dreamt of a supranational and interdenominational society / fraternity, that is, of a new Europe.

It is logical to deduce that the realization of a European Republic or World Republic according to Masonic principles, as a project or at least implied the hope of a socio-cultural transformation (according to the Masonic principles of secularism and anti-dogmatism) and / or the revolution and the political-military overthrow of denominational Catholic monarchies (for example the Habsburgs) and the then the Papal States.

In 1868, the first edition of the newspaper Les Etats-Unis d'Euro-pe printed [The United States of Europe], an organ of the International League for Peace and Freedom, based in Bern (Switzerland), and offices in France, Belgium, Italy, Germany and England. In the first edition of January 5, 1868 it is announced that the Freemason Giuseppe Garibaldi is its honorary President (p. 1). Freemasonry is praised in number 47 of November 22, 1868 (p. 187f).

In 1889, Austrian Catholics at Catholic Day meeting in Vienna, accused Freemasons of desiring the destruction of the Catholic Austria: Delenda est Austria . 3

From August 31 to September 2, 1900, an international congress of Masons will take place in Paris under the auspices of the Greater Orient of France ( GOdF). The Grand Master of the Swiss Grand Lodge Alpina, Edouard Quartier-la-Tente (1855 - 1925), expressed the hope for a coalition of all worldwide Masonic powers to realize the Masonic ideals and the world-re-pu-Republic to set up: " Pour la fondation de la République Universelle." 4

In 1902, about sixteen years before the fall of the Habsburg Empire, the Rivista della Massoneria Italiana of the Grand Orient of Italy published the article by the Italian Freemason Emilio Bossi (1870 - 1920 ), who wrote the following from Lugano (Switzerland):

From July 3rd to the 5th, 1909, a meeting of French and German Freemasons took place in Baden-Baden. The high dignitaries of the Grand Orient of France, Charles Bernardin, offered a toast to the United States of Europe from ( "Etats Unis d'Europe") and Freemasonry. 6

The Hungarian Jewish historian François Fejtö (1909 - 2008) explained that the Freemasons project of the 18th and 19th century, claimed that the United States of Euro-pa and the World Republic implied the destruction of the Catholic Habsburg Monarchy and that Freemasons and Freemasons estates, especially the Grand Orient of France, played a major role in this. 7th

Indeed, with the end of this empire, Freemasonry could return to Austrian soil and especially to Vienna. In 1918 the Grand Lodge of Vienna is founded. In 1922 Richard Nikolaus Graf Coudenhove-Kalergi (1894 - 1972) was initiated into the Vienna Lodge Humanitas, then he was initiated into the "Mozart Chapter" of the 18th degree - Knight of the Rose Cross of the Old and Accepted Scottish Rite. Kalergi founded the Pan Europa Bewegung that is supported from the outset by the Grand Lodge of Vienna. 8th

In the book Practical Idealism. Adel - Technik - Pacifismus (Pan-Europa Verlag, Vienna-Leipzig 1925) the Masonic Kalergi identifies the European spirit as equal with Lucifer-Prometheus, the bearer of light:

"In Jewish mythology, the European spirit corresponds to Lucifer, in Greek to Prometheus, the lightbringer who carries the divine spark to earth, [...] the father of battle, technology, enlightenment and progress [...]", p. 83.

According to Kalergi the "spirit of Europe" has broken political despotism, and only with its emancipation from Christianity does Europe find itself (see page 83. - 85).

Masonic Europe ("l'Europe maçonnique"), represented by the Grand Orient of France, consists both in the Union of European Freemasonry and in a Europe that is culturally, politically and socially based on the principles of Freemasonry, including secularism is (p.70 - 76)), means what secularism, i.e. the exclusion of any influence of the Catholic Church from society.

In Brussels, on October 15, 2010 and November 30, 2011, the delegations of various European Freemasonries (including the Greater Orient of Italy and the United Grand Lodges of Germany) met with their respective Grand Masters and representatives of liberal and humanist associations with the heads of the European Union ( with the Presidents of the European Commission, the European Parliament and the European Council). They should agree on a common plan to promote “democratic” and “libertarian” ideals. 12

On March 2, 2012, the then Vice-President of the European Parliament visited the headquarters of the Grand Orient of Italy and endorsed the Masonic commitment to secularism. 13

In April 2011, the center-right majority in the Hungarian parliament (262 votes in favor against 44 against) approved a constitution that came into force in early 2012 and is based on God, speaking of Christian roots and the traditional family (by a union of a man and woman). The Hungarian constitution also restricts the powers of the banks, defends the right to life of the unborn and does not recognize the “right” to abortion or homosexual relations. The European Union (EU) responded by, among other things, defending the absolute independence of the banks (ECB and IMF) and threatening economic sanctions. The British BBC also criticized Orbán's conservative “drifting away”.

Even today, proponents of what the Masonic Kalergi called “The Spirit of Europe” try to restrict the sovereignty of European states by imposing certain policies on them, for example with regard to homosexuality / gender and abortion, which are incompatible with the Christian roots, the real roots, of real Europe.

* Father Paolo Maria Sia-no  belongs to the order of the Franciscans of the Immaculata (FFI); The Church historian with a doctorate is considered one of the best Catholic experts on Freemasonry, to which he has dedicated several standard works and numerous essays.

E Michael Jones PhD clued me in to the nature of this conspiracy. His book "The Jewish Revolutionary Spirit" is a masterpiece which is out of print. I read most if it through a source on line of 1194 pages.---Fidelity Press will come out with a new edition of three hard bound books with a target date of March 2021. If there is one question that I would ask him, it would be about his "hatchet job" on Malachi Martin. I have the highest respect for the legacy of the deceased Martin (1999) and would like for Jones to clarify his innuendos which are from my reading totally without substance but only of the "he said, she said" variety.

Gary Giuffre spent time with Fr.Martin in the mid 1990's.
Contact this website & Mr.Giuffre will tell you all about Fr.Martin.
https://whitesmoke1958.com/articles-interviews-mr-gary-giuffre/