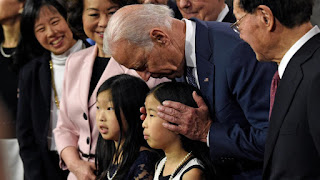 Edit: of course the aberrosexual enabling, pedphile coverup former Bishop of Buenos Aires supports Joe Biden.
POPE FRANCIS has backed US President Joe Biden to unite America.
In a statement issued following President Biden’s inauguration, the Pontiff spoke of his hopes for a society that fostered freedom, justice and respect for all under the Irish-American leader.
The Pope also expressed his desire to see renewed efforts to support the poor and vulnerable. “Under your leadership, may the American people continue to draw strength from the lofty political, ethical and religious values that have inspired the nation since its founding,” Pope Francis said.
Read further...
AMDG
Posted by Tancred at 7:11 AM

His family 🌳 is mostly French but it’s a mix of
Huguenots And slave breeders. His kids marry
Joos.

Joe Obiden is a psychotic talking cadaver sitting at the desk of an entity known as USA, Inc. All the howling banshees of Hell are dancing with glee at the illusion of their success. It is a scene right out of Star Trek episode “Whom Gods Destroy”. This bastard “president” just doesn’t realize that he is on Elba II in the Federation’s facility for the criminally insane. Yet.

“Whom the gods would destroy they first make mad.” Indeed. All of them.

It is true that politics is an aphrodisiac. There is plenty of sexual activity among politicians of every make and lifestyle. Just because everyone is doing it does not make it right.---The Supreme Court has ruled that the "standards of the community" set the guidelines for what is pornography. That is why you don't see "Walt Disney's Bambi" shown in Times Square. You would have to shut it down and arrest the theater owners.---I don't know if Mr. Biden is a pedophile. I don't like him but you have to have proof. Photos of him with little Asian girls is not proof.---The scandal at Boys Town, Nebraska implicated the Republican Party. Karl Rove allegedly was one of the king pins. Omaha Savings and Loan used boys for parties with the connivance of priests at the school.---The Church has to clean up its act. The paranoid belief that "white supremacy" runs the Catholic Church in America is a "fairy tale" made up by fairies who want to use this as a cover for pedophilia. There is a cancer among the clergy and it is eating away at the viability of a moral Church and priesthood.----The pedophiles in the clergy want this to happen so that they can move on to their next plateau which is the obliteration of the priesthood of Melchizedek and the rise of the priesthood of the laity. This new laity will make its own rules and has a parallel to those that Moses found when he came down from the Mount. They were worshipping the golden calf of the fertility god of Ba'al. This is nothing more than a return to paganism as written of by Malachi Martin. --Pedophile priests now want their activities sanctioned as holy. They should be "burned at the stake". Meanwhile, we have a pontiff who has said to thank God for "making them that way".

Took a fair while for the Magisterium to adjust its dogmatic assertions to the Copernican Revolution. It still hasn't come to grips with wholesale rejection of Humanae Vitae by the Catholic faithful.
Lots of room for improvement here chaps.

The pictures of Biden embracing and sniffing uncomfortable girls and housewives are pretty ubiquitous, but his son’s laptop has pictures of Hunter having sex with female children.

The Church finally accepted that Copernicus' theory that the earth is part of a system that is heliocentric was verified by subsequent scientific work particularly Galileo. The exact same happened with Darwin's theory of evolution. The Church was forced to make enormous distinctions between what is core to belief and the philosophical/theological apologetics encasing dogma.

Beginning with Leo XIII through to the present the Church teaches that God made the world but science shows how that was done. In the case of evolution, Leo, Pius XI and Pius XII made the helpful distinction that while life may have evolved over millions of years, it is God who creates the soul. In that way the Church has learnt to live with two truths that don't contradict each other: scientific and theological.

Vatican II represents a very similar situation where it became very clear that the theological and ecclesiological language a the Church had used for many centuries to describe itself and to express its evangelical message had become largely incomprehensible to society. That's why Vatican II used plain language in its documents rather than the mechanical neo-scholastic forms used in previous Councils. The Vernacular form of the Mass was not new, it was on the agenda at Trent and was only set aside because those pushing a hard counter-Reformation line prevailed.

Trent itself marked a major readjustment in life and teaching as a result of the challenges thrown up by the Reformation.

Really... When and where specifically did the Church endorse and codify Copernicus?

During the past four centuries there have been a series of attempts by the Catholic Church to undo gradually its original condemnations of Galileo and its guarded attitude towards Copernicus. The process began seriously with Pope Benedict XIV (in 1740–1758). The prohibition of Copernicanism was totally repealed in 1820-1835 then there was a tacit, implicit theological vindication of Galileo’s biblical interpretations by Pope Leo XIII’s encyclical Providentissimus Deus (1893); and the partial, informal, and ambiguous rehabilitation of Galileo by Pope John Paul II (in 1979-1992).

The Church’s magisterium gradually accepted the scientific theory behind Evolution and recognised that the core of Catholic teaching could remain but stripped of its former fundamentalist reading of Scripture. See: Leo XIII, Providentissimus Deus, 1893, Pius XII in Humanae Generis, 1950.

In October 1996 Pope John Paul addressed the Pontifical Academy of Sciences on the origin of life and evolution. In his address, John Paul helpfully laid out Catholic teaching on Evolution during the previous half century. He also made the point that the Church accepted that evolutionary theory was not longer ‘theory’ but fact.

The Pope made clear that his predecessor, Pope Pius XI, had “considered the doctrine of ‘evolutionism’ a serious hypothesis.” But, John Paul says, “Today, almost half a century after the publication of the encyclical [of Pius XI], new knowledge has led to the recognition of the theory of evolution as more than a hypothesis. It is indeed remarkable that this theory has been progressively accepted by researchers, following a series of discoveries in various fields of knowledge. The convergence, neither sought nor fabricated, of the results of work that was conducted independently is in itself a significant argument in favor of this theory.”

The Church has never abrogated its condemnation of Copernican Physics, and you're still at a loss to illustrate how it has changed Church teaching, which took place after Trent, btw.

Read what I said in the first post, not what you think I wrote. BTW, with the evidence of Galileo's telescope, Copernican theory was gradually accepted as fact. If you read church history and the history of church doctrinal development, often what is taught as dogmatic truth is relativized over time until it is eventually condemned, eg slavery, colonialism, democracy etc.
I mentioned Trent in relation not to Copernicus but to theological language and the vernacular Mass.

Galileo falsified the data he received from his telescope.

Why don’t you try writing true sentences that address the question put to you rather than trying to obfuscate?

"Galileo falsified the data he received from his telescope." You have an obligation in moral and civil law to substantiate this allegation otherwise your credibility is about as solid as 'fake news.' Try harder.

"I'll bet you expect Copernican theory justifies your degeneracy." Another non-sequitur dressed up in baseless assertion and all wrapped up in the fog of irrationality.
Good try, old chap, but there's room for improvement in the adversarial area.

Sorry, you just have an undergraduate level Renaissance survey course version of history.

I guess the reason you lie so much is to conceal some deep-seated resentment you have against your father for leaving you for dead.