(Rome) The Roman Congregation for the Doctrine of the Faith relieved an American Bishop of the charge of sexual abuse. The decision is astonishing.

Msgr. Joseph Hubert Hart was Bishop of Cheyenne Diocese, Wyoming State, from 1978 to 2001. Serious allegations of homosexual abuse led to his early retirement in 2001. Twenty years later, the Congregation for the Doctrine of the Faith, those responsible for serious offenses, judged the case differently. Although only some of the allegations were considered, the victim side gave the impression that the bishop had been washed clean.

and appointed auxiliary bishop of Cheyenne. Two years later, the same Pope, Hart was 46 years old at the time, appointed him bishop of this diocese.

At the age of 70, Msgr. Hart was retired by Pope John Paul II on September 26, 2001. The first allegations of homosexual abuse reached the public as early as 1989. They were referring to the early 1970s when he served as a priest in the Diocese of Kansas City. At the time, he volunteered for treatment in Arizona. It was attested that he posed no threat to himself or to

others. These details became known only after his retirement.

In 1977, when Hart was already Auxiliary Bishop of Cheyenne,

he was also accused of homosexual abuse there. He is said to have forced a 14 year old boy to undress several times. In the same year, however, he was acquitted in a diocesan

Later other victims came forward who testified to have been homosexually abused by Hart at the time. The internal diocesan procedure that had led to his discharge later proved to be flawed. Mgr. David Ricken, who was to become Hart's coadjutor in 1999 and his successor as Bishop of Cheyenne in 2001, was responsible for the proceedings. He was accused of covering up Hart's homosexuality.

After his retirement, new allegations related to the years

$ 10 million in compensation to 47 victims of clergy abuse, including Harts.

number of Hart victims known by name to more than a dozen. In the wake of the new revelations, it came to light that Hart was bringing male children and teenagers between the ages of twelve and seventeen to a house on Lake Viking, Missouri, owned by another homosexual abuser, Father Thomas O'Brien. 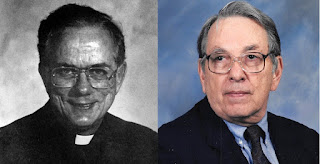 O'Brien was ordained a priest for the Diocese of Kansas City in 1950. Like Hart, he had Saint Meinrad SeminaryVisited in Indiana. The allegations against O'Brien, who died in the priesthood in 2013, date back to the early 1960s. At Lake Viking, he is said to have abused victims, sometimes together with Hart and a third priest. The youngest victim O'Brien was accused of abusing was seven years old at the time the abuse began. The priest, who preferred to work in schools and boarding schools, gave the boys, “often twelve years of age and under”, to drinking alcohol and smoking marijuana and showed them porn films. He then threatened them to keep silent if they “didn't want to go to hell”.

Hart and O'Brien knew each other from Saint Meinrad Seminary, a seminary in Indiana, which they had visited. Shortly before his death, O'Brien agreed in an out-of-court settlement to pay $ 2 million in compensation for pain and suffering to the family of one of his victims who committed suicide at the age of 14. Hart used the house on Lake Viking until he came to Cheyenne as a bishop.

The Roman trial against Bishop Hart

In the Hart case, it became known in June 2019 that canonical proceedings would be initiated with the approval of Pope Francis. For delicta graviora , serious offenses which makes it the responsibiltiy if the Roman Congregation . As the diocese of Cheyenne announced last Monday, the bishop emeritus was exonerated by the Congregation in seven cases. Five other cases can no longer be proven "with moral certainty" and the two remaining cases, which concern homosexual contact with male adolescents aged 16 and 17, and were not heard by the Church because they were not mionors at the time of the alleged abuse.

The incumbent Bishop of Cheyenne, Monsignor Steven Biegler, emphasized that the Vatican did not say in the decision that Hart was innocent, but that there was insufficient evidence that he was guilty. The Congregation for the Doctrine of the Faith, according to Bishop Biegler, bases its decision on the judgment of priests and bishops, who are canon law experts, and in the last instance on the Pope.

The international press agency Associated Press ( AP) recalled in a report on Monday that the allegations against Hart essentially correspond to those against Theodore McCarrick, the retired Archbishop of Washington, who was stripped of his cardinal dignity in 2018 and who was restored to lay status in 2019.

Neither the Vatican case against McCarrick nor that against Hart were public. The fact that the diocese of Kansas City reached Hart's financial settlement with ten victims, there was no prosecution by the prosecution.

As Bishop Biegler von Cheyenne emphasized in his statement, Hart was reprimanded by the Congregation for the Doctrine of the Faith for having shown a lack of prudence as a priest and as a bishop by staying in his private home alone with minors and traveling under the same conditions. In doing so, he ran the risk of not fulfilling his obligation to keep the necessary distance and of causing nuisance among the believers.

Hart was warned to comply with the sanctions previously imposed by the Vatican, which prohibit him from contact with minors and from staying in seminaries. Nor can he take part in public acts. In doing so, the diocese indicated that the aforementioned restrictions still apply.

Bishop Steven Biegler is one of the nine progressive US bishops who stabbed the US bishops' conference in the back on the same day he issued the statement on Bishop Hart and issued a de facto declaration of support for Joe Biden's gay agenda.

I am from Missouri. Kansas City is on the western side of the state. St. Louis is on the eastern with Columbia (U of Missouri) in the middle. There are four dioceses in Missouri with St. Louis being the metropolitan where there is an archbishop.----In 2008, then Archbishop Raymond Burke left St. louis under mysterious circumstances in 2008. His replacement Robert Carlson from Saginaw just retired. One of his first acts was to reform Kenrick-Glennon Seminary. There was an interview of Gary Meier who was an ex priest in this archdiocese with the St. Louis Post-Dispatch. He stated that he was recruited and accepted as a late vocation with seven of those interviewing him knowing that he was living an active homosexual lifestyle.---He was asked if he could remain celibate. He answered with "I think so". That is what the faithful are fighting in the Church.---The new archbishop is Polish, Mitchell Thomas Roganski, and sent in from Springfield, Mass and undoubtedly approved by Cupich in Chicago. So far, he is an unknown commodity. Nevertheless, he did officially meet with a Jewish contingent to see how Catholics and Jews can work more closely in the current ecumenical environment.

The Opus Dei Church of Vatican JEW likes to dialogue by unveiling its crypto-Jewish agents from both the left and right (such as James Martin & Taylor Marshall). One of these former crypto-Jews then proceeds to hoodwink Catholics into believing that that the Church has Talmudic roots, while the other demolishes everything he can as he attempts to lead Catholics into a hellishly Kabbalistic future. Dialogue means that Catholics become Jews. And if you refuse, there are plenty of Catholics on social media who will block you for alleged anti-semitism (i.e. verbalizing ideas that Jews hate), but not a single peep out of them regarding the blasphemies of Christ-hating Jews like Ben Shapiro.

I do hope you feel a great deal better after that performance, Gladstone. Don't forget to take your regular psycho-tropic meds.

Just stay away from minors, Gaybrielle.

I see that the paid Hasbara contingent; trolling from Tel Aviv, Israel; is still monitoring EF like the truly paranoid racial supremacist-criminals that you are.

Well here are some fun historical facts about counterfeit Israel, the global capital for swindlers, pedophiles, and human organ traffickers.

Fun fact #1: on June 8th, 1967, Israeli fighter jets deliberately attacked the USS Liberty, a US Navy communications ship sailing in international waters of the Eastern Mediterranean Sea. Israeli vessels showed up and shot up lifeboats with .50 cal machine guns. They used napalm! 34 Americans were killed. 172 wounded. You see, our greatest ally wanted to false flag us into the 6-day war of 1967. Cowardly Jew Israel NEVER fights its own wars.

Fun Fact #2: The Lavon Affair took place in Egypt during the 1950s. The Israeli Mossad was caught plotting to bomb public places like movie theatres, to create terror and blame it on the Egyptians. Jews were kicked out of Egypt after that. Oh, the poor eternal victims.

Fun Fact #3: The Israeli Mossad was involved in the truck bombing of the USMC compound in Beirut, Lebanon. Killing over 200 US Marines. Israeli Victor Ostrovsky mentions it in his book, By Way of Deception.

Fun Fact #4 Israel's hi-tech university, the Technion, runs a program called Talpiot. The purpose of the Talpiot Program is to educate Israeli Jews to engineer security software with internet enabled backdoors, and then sell it to governments and companies around the world. Guess what that means: Israel can remotely shut down nav,comm,and weapons systems in your fighter jets! Or they can just make Toyota automobiles rev themselves up and ram into walls without driver input.

Fun Fact #5: Israel's nuke program, based on tech stolen from the US, and for which they blew the brains out of US President JFK, has the Samson Option. The Samson Option means that Israel has ballistic missiles aimed at every capital in Europe, should people one day figure out that the puppets leading their nations are controlled by Jews.

Thank you, Jake All-Dim-Stein, and THANKS, JEWS!

Oh, I did not realize that this is Gaybrielle.

Gaybrielle: you are a reprobate priest. Your only hope to escape hell is to resign the clerical state and undertake a life of penance. Trolling while drunk is an unwise use of the little time left to you.

Please remember Father Gordon Brown, still in New Hampshire Prison, some two decades. His blog "Beyond these Stone Walls" just might give you the other side of the priest pervert story.
😃