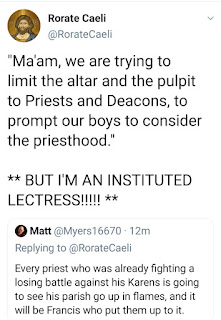 Edit: opening the office of Reader to women has been in the works for a while. It was quietly announced by Benedict XVI in 2010. Now Bergoglio is pushing it in a new Mandate. This is just another step in the overall agenda of women’s ordination.

[Vatican News] With a Motu proprio released on Monday, Pope Francis established that from now on the ministries of Lector and Acolyte are to be open to women, in a stable and institutionalized form through a specific mandate.
There is nothing new about women proclaiming the Word of God during liturgical celebrations or carrying out a service at the altar as altar servers or as Eucharistic ministers. In many communities throughout the world these practices are already authorized by local bishops.
However, up to this point, this has occurred without a true and proper institutional mandate, as an exception to what Pope St Paul VI had established when, in 1972, even while abolishing the so-called “minor orders”, he decided to maintain that access to these ministries be granted only to men because they were considered to be preparatory to the eventual admission to holy orders.
Link...
AMDG
Posted by Tancred at 6:02 AM

Francis is laying to groundwork.....for women deacons and priests.

Several years ago, I attended Mass at the site of one of the new socialist academies set up by the replacement for now Cardinal Burke. A young woman ascended the steps to the pulpit for two readings. During the reading, she kept glancing down at another woman sitting in the front pew to her right. The Church pews were in an "L" shape with the lower link to her right.----I didn't think much about it. However at the conclusion of the second reading, she left the "stage" or altar and descended the front and then to her right to the pew. She entered the pew. Both hugged as she sat down. They then began holding hands which they did for the rest of the Mass including during the reading of the Gospel when everyone stood.---The priest was a radical and a visitor. I did not know who he was. After Mass, I attempted to talk with him to see who he was. He told me his background and where he was stationed during the week. He then realized who I was and immediately stopped talking and abruptly turned and almost ran out of the church.---When then Archbishop Burke was "indeed run out of town" through emails from a chancery veteran, his replacement from Saginaw started accepted homosexual candidates for the priesthood. The one interviewed by the Post-Dispatch acknowledged so. He became the North County dean and was stationed at the black parish on the North Side.---The parish is in a poor area where houses are worth near nothing. Nevertheless, the rectory is appraised on a website for the City strangely at 750,000.00. He soon left the priesthood once he obtained his MSW and he left to counsel homosexuals as detailed on his website.---To make a long story short, this priest who said the Mass was his replacement. He now has been moved to a liberal parish in Webster Groves which is vey rich to bring his "Gospel of the left" to the main stream. The homosexual agenda is now being put in bright lights on the marquee of the Church of Modern Times.

Bergoglio's V2 church already locked up and closed and shuttered around the globe because his effeminate globohomo clergy and laity worships the almighty Covid virus ball NOT Christ is thankfully disappearing anyway.

This "women on the altar" stuff was in the works a long time. Benedict, John Paul II. Modernism did not start with Bergoglio.
When a Pope accepts "Dignitatis Humanae", he accepts free speech for error as a human right. And anything the Church can say afterwards to critize an Error can be inferred to be a violation of human dignity. A Blasphemy in and of itself becomes sacredly protected.
But it does not stop there. Because once you concede that error has rights to be heard and demand, then all subjective realities drown out the objective Truth. Truth becomes an indistinguishable voice talking among the babbling of many. But to make matters worse the arrogance and force of powerful and Willfull enemies of Truth, possessing a near monopoly of educational and media institutions can force a consensus that imposes and crystalizes itself into an appearance of the settled Objective Truth. These hatreds of Fatherhood, and Motherhood, and Traditional Family and Human Life resulted from Vatican II's "Dignitatis Humanae" Declaration on Religious Liberty. At the time of the Council, the originally intended "Declaration of Religious Tolerance" was rewritten by lazy, inept, uneducated and even evil clergy and periti, as Father Courtney Murray. The Original schemata presented and thrown out needs to be brought back. "Dignitatis Humanae" Declaration of Religious Liberty needs to be replaced with the original Declaration of Religious Tolerance. Error can be Tolerated, but never respected,nor accepted. Talk favoring Abortion, Gay Rights, Feminism, Transgenderism, Divorce, etc.,may be tolerated under some conditions, even to promote genuine dialogue between the True Church and false religions and among the Church and nonbelievers. Or to even possibly allow such talk (based on proportionate and prudential judgement) to prevent civil or political violence. But the evil ideas of false religions, opinions or lifestyles, are not sacred, and worthy of neither respect, nor acceptance.

With the N.O. shrinking numbers, for years BEFORE COVID, this whole issue is a big (YAWN).
The few, pro-abortion feminist, stringy gray-haired women who love to parade around in male vestments (go figure that!) will all be gone in a few years.
The queer male clergy will miss their pushy mommy figures. But then, at this rate, there will not be any of them either.

"Jake Allbright" what are you talking about? I don't support your favorite leftist TV shows.
Logic 0.5

Leftists reproduce by brainwashing the next generations. And mutilating their bodies and minds before and after birth. Mutilated bodies and minds lead to psychiatric problems. To pretend the problems get solved the problems, "Social Workers", "concerned educators", and "Community Activists" get jobs. Abortionists get paid for those unable to cope with patriatchical
marriage because careers replace motherhood. Republican politicians get jobs to pretend concern. Racists get paid looting and telling others they are racist. That's how Democrats and Progressivists develop and grow the Economy.

This site censors far too many comments.