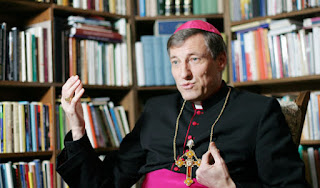 The appointment of new bishops is being based on a screening for acceptance of radical views which are clearly against the Gospel. This is factually in line with the belief that the Argentinian is the one named in the Third Secret of Fatima who is under the influence of Satan. Sister Lucia was ten years old in 1917. She was innocent and not devious as believed by Cardinal Roncalli. All through her life, she was relaying a message from the Mother of God.

Since Vatican II they got worse and worse, and just before the it was almost all over, Benedict was elected as the Church's last gasp. And now the Church is dead. The Antichrist will come to fool even the elected.

The V2 "church" is dead; it exists only in a feeble monetary sense by selling its real estate holdings donated to the pre V2 church, generations ago and from revenue from the deep state government.

Yet more evidence that the Novus Ordo regime is not Catholic, and is certainly not the Catholic Church. The actual Catholic Church is in the catacombs once again.

The saddest thing is that it took only few years after the great cardinal Janis Pujats, the former archbishop of Riga left his office (because of age reasons), that the younger generation of Latvian bishops became so politically correct...

This is all the influence of Francis and company. I do believe that he is the Pope in the Third Secret of Fatim influenced by Satan. He might even be the "Anti-Christ" who takes the appearance of being a genuine CAtholic Popeand leader, but who leads his people into error and sin.
I read a prediction made by Saint Francis of Assisi days before his death. He was lamenting what would happen to his beloved Order and Church in the future. He gave no timeline, but cried for his Order, which he said would be greatly diminished as would other great Orders, by a great evil bought by a Council, and that a certain illegitimately elected Pope would try to ruin the Church by his agenda, and those he appointed...….but that this reign of this imposter would be short, and the damage done would be corrected by a great Pope (his successor)
Well, the Church since Vatican II and especially since Bergoglio is ruined. Saint Francis of Assisi must be crying in Heaven to his Order go from 28,000 Friars Minor in 1958-1960, to 12,711 as of 2020 with a median age in Europe of close to 80, and in the 70's in the USA and LAtin America.
I truelythink the evil which has been spoken of for so long in prophecy in the Church, is Pope Francis, and all his people....this Archbishop of Riga, the Latvian bishops, hundreds of others, the Vatican, and especially BERGOGLIO, the mastermind of all this. Influenced by Satan? Without a doubt.

The Prophet said well Isaiah 5:20 Woe to those who call evil good and good evil, who put darkness for light and light for darkness, who put bitter for sweet and sweet for bitter.

Francis is too dumb to be the antiChrist

You know, some Catholic folks I know laughed at me for my distain of the US bishops support of using the wuflu vaccine despite it's use of fetal tissue cell lines. Then I read stories like this and I know it's Catholic Bishops Opposite Day (AGAIN!) Do the exact opposite of what the bishops are pushing and likely you'll be living a sacramental life or at least trying to...

I've had Covid-19, luckily apparently a mild form. I felt lousy for two weeks, alittle worse than the flu, but fortunately, I didn't need a hospital. I lost 15 lbs...didn't (and don't much still) have an appetite. Bt apparently am improving. Used to get tired by 11:00 am., but doing better.
But I was going to get the vaccine anyway. But it makes me sick the thought of getting something that has fetal tissue cells in it. When I expressed my concern both morally and just physically to it, my doctor gave no answer....I don't think he wanted to admit it, because it is distasteful and repellant to so many people.
But does anyone know....do they inject tissue cells from slaughtered fetuses/babies into you to get the vaccine. Morally, it's very objectionable, but physically it's sickening. Maybe that's childish of me....but I picture aborted fetuses being dissected (or whatever) for their tissue cell lines and it makes me sick. These were individual children(or could have been).


(peaking of covid-19, apparently Pope Francis and his Curia had an Advent retreat) last Friday. Present were a group of Francis' most liberal CArdinal advisors. One, Cardinal Krajewski (57), the Pope's almomer of immigrant rescue fame, apparently had Covid-19, and now is in the hospital with serious pneumonia. The point is, he was speaking with Francis face to face without masks on Friday, and sitting next to Cardianl Tagle and 1- others (not social distancing). One additional Cardinal is sick. I would not be surprised if Francis gets it...….

Exactly!
The church is not dead,it's being kept alive in traditional chapels during this emergency.
My opinion is meaningless but people don't understand the sedevacantist opinion.
The trad rite Bishop's + Priest's are keeping the church alive,as is both SSPX groups.
God bless
-Andrew

What does Father James Martin SJ think of this?