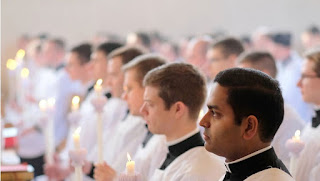 20 seminarians from the St. Peter Seminary in Wigratzbad (FSSP) received the minor ordinations in February 2020.

(Florence) While diocesan seminaries are empty due to a lack of vocations and, in the fight against priestly celibacy and for the female priesthood, priestly vocations do not seem desirable anywhere, traditional seminaries have completely different concerns. They are struggling with the lack of space. The Seminary of Saint Peter of the Fraternity of St. Peter in Wigratzbad and the Seminary of St. Philip Neri of the Institute of Christ the King and Sovereign Priest in Gricigliano have experienced so many new entrants that it is as though they are bursting at the seams.

In order to be able to accommodate all seminarians, in Wigratzbad, where seminarians from the German and French-speaking countries and the respective neighboring areas study, the rooms of other academic years were occupied twice over. The premises in the seminary, which was only inaugurated in December 2000, have long been exhausted. The seminary records the years 2019 and 2020 as the strongest entry cohorts to date. Since it is a new building, there are no outbuildings or attics that could be used to accommodate seminarians.

In Gricigliano, rooms that were part of the farm buildings of the former manor, in which the seminary is located and which have not previously been used, are being provisionally rededicated. Further conversions to gain space or additions or extensions will be necessary hereand there.

Last May and June, thirteen candidates from the Petrine Brotherhood were ordained priests. Because of the corona restrictions imposed by the governments of France and the Federal Republic of Germany, they took place for the new priests from Wigratzbad under special circumstances and not in public. Among the consecrated there are four new priests from the German-speaking countries.

Due to the redesign of the altar area carried out by the diocese of Augsburg a few years ago, the Church of the Atonement in Wigratzbad is no longer suitable for Mass in the traditional rite. For ordinations, even under normal conditions, the seminary has to use churches in the area that are made available by friendly priests.

For the Institute of Christ the King Sovereign Priest in July nine new priests were ordained for the traditional form of the Roman Rite. The ordinations were, as it has for the Institute, become a tradition in the church of Santi Michele e Gaetano and were offered by Cardinal Raymond Burke. The church, dedicated to the Archangel Michael and consecrated by the great Saint Cajetan, a co-founder of Theatines, is located in the immediate vicinity of the famous cathedral of Florence and the associated baptistery.

20 seminarians of the institute were vested in the run-up to the ordination and received tonsure. 23 seminarians received vesture and tonsure for the Society of Saint Peter in October 2019 in the USA and in February in Wigratzbad.

Both communities are still very young. Under canon law, both were established as societies of apostolic life by clerics under papal law who know no religious vows. While the Society of Saint Peter  is constituted as a society of secular priests, the Institute of Christ the King Sovereign Priest follows the example of secular canons, like those brought into being by St. Francis de Sales. The former are addressed as priests (fathers), the latter as canons (canons).

The Fraternity of St. Peter was founded in 1988 by a handful of former priests and seminarians of the Priestly Society of St. Pius X. Today it has two international seminaries. The General House is located in Friborg, Switzerland. The Superior General is the Pole, Father Andrzej Komorowski, Regent of the seminary of Wigratzbad is the French, Father Vincent Ribeton and of the seminary of Danton (USA) the Swiss Father, Josef Bisig.

The Institute of Christ the King Sovereign Priest was founded in 1990 by two French priests, Monsignor Gilles Wach, Canon Philippe Mora in Gabon and they were received shortly after in the Roman Catholic Archdiocese of Florence in Tuscany. Msgr. Wach is Superior General of the Institute, Kan. Mora Regent of the international seminary.

While the Society of Saint Peter has three roughly equally strong pillars, a German, a French and an English, the Institute of Christ the King Sovereign Priest is a predominantly a French community. The majority of their relatives come from France or the French-speaking area. However, the Institute's vicar general is the German priest Msgr. Rudolf Michael Schmitz. Msgr. Wach was ordained a priest by Pope John Paul II, Msgr. Schmitz by Joseph Cardinal Ratzinger.

The lack of space can be remedied, but the lack of appeal is much more severe.

Families are eager to sacrifice their sons and treasure to the Church for more holy priests. Any Catholic would call that a win.