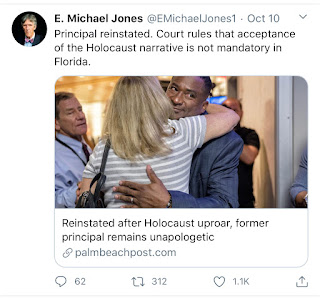 MARRA | PALM BEACH POST | 3:53 pm EDT October 14, 2020 Through all the fallout from his Holocaust remarks, ousted Spanish River High Principal William Latson never stopped insisting he did nothing wrong.
Removed from the school after the revelation that he refused to call the Holocaust a historical fact, he sealed his fate by blaming the parent to whom he’d made the comment. It was that move, not his explosive remarks, that led to his firing.
But Latson is back on staff in Palm Beach County’s public school system after successfully appealing his termination. And he appears as unapologetic as ever.
Link...
AMDG
Posted by Tancred at 12:37 PM

Good for him and his students.

Florida is exceptionally kind to Nazis. Look at how Trump is welcomed.

Something to consider. Jews for years have been able to guilt the White goyim for years about The Shoah. Something many have taken notice of, is that there are increasing numbers of Blacks that just don't care about The Shoah. They view Jews as a high end group of Whites with a different religion--something you are seeing with other POC groups as well. No amount of "Shoah Education" will change that.

Experience within past 22 plus years taught me the average Black man/woman under 50 is hyper aware and knowledgeable on who owns and controls the Govt,
Media,Banks,Entertainment,
Education,etc as compared to White Men/Women under 50.
The USA White Race is naive blinded deceived and
asleep on these topics while being common knowledge in Black Families since mid 1990's.
If you're White don't try to talk with nor reason with them.
They'll talk in nonsensical metaphors which would confuse even Charles Manson,use
non-sequiter after non-sequiter + refuse to acknowledge facts reason & logic.
Still,they're much more street smart than White Suburbia.
-Andrew

LOL!
President Trump emphatically supports Israel.
1% chance he knows resistance to our Colonial Masters is futile while laying groundwork for liberation from Israel in 2050.
99% chance I'm completely wrong but he is not a National Socialist.
When did Florida become the new
Wolf's Lair?
-Andrew

Yes, there is a Holocaust. There is also no reason to say that there is many Holocausts.The main Holocaust is God at the Cross. The other are smaller "holocausts". They can not be denied. But they should not be allowed to overshadow the principal one. That is political, moral, theological agenda of liberal Jews. For liberal Jews, the "Holocaust" is the eternal suffering and death of their god. Not the God of Orthodox Jews, but the god of a gnostic/transcendental meditation "Consciousness of the People". A National consciousness. The combined experience of the Suffering and History of the Jewish people is a different religion than Orthodox Jewry. While the Orthodox stay in their closed knit community waiting for a messiah, the liberal Jews dream of coming out of the closet and imposing and dominating their ideology on the world.Every "minority" that suffers, suffers in union and communion with the eternally oppressed Jews.In this sense, the liberal Jewish Consciousness is in union with all leftist "oppressed"neo-Marxist classes.

The Jewish Holocaust is a propaganda product based on exaggerating events, appropriating narratives and pushing repetition. Here is the crowning proof - JPII in his homily at Oświęcim/Auschwitz [June 7, 1979] said: "In this place of the terrible torment that brought death to FOUR MILION people from different nations, Fr. Maximilian Kolbe achieved a spiritual victory similar to that of Christ himself, giving voluntarily to die in the starvation bunker - for his brother. " And he concluded: "For I am speaking not only for the sake of those who died in FOUR MILION victims in this enormous field; I am speaking for all nations whose laws are being known and violated."
It is currently claimed that about 1 million people died in Auschwitz. If the estimate has an error of 400%, then this is a worthless bill.

Speak the words, "six million" and all thoughts go to the "Holocaust".

It does not matter if was 8,6,4 or 1 million. It is always an evil tradgedy.
The fact is that it is used to impose a nationalist guilt complex on all people's, directly or indirectly, to hi e liberal Jews the appearance moral highground to justify The State of Israel and limit critical conservative political, theological and liturgical Christian speech. Moreover, it creates a new relgion based on transcendentalist human culture.

It is also, an instrument if the United States in keeping their occupied European continental "puppet states" from asserting independence from Enlightenment ideology imposed after World War 2. That is why the US and Israel work in tandem.

Unfortunately, it’s a crime to question the 6 million number.

is he hugging a white woman?