Edit: one tell about the baddies is that you’ll find they have a pet project about psychoanalyzing Catholics (Not talking about the presumably mentally healthy people floating down the liturgical, moral and doctrinal river of the Novus Ordo.) Some may remember this is the hobby horse of Holy Skojek, Hilary Blight and some clergy of doubtful gender, among others I can’t recall right now. I don’t recall Virus doing this, which was why for a long time I defended him, but he’s doing it now.  We know Robber Barron with his weight lifter entourage is toxic and fake, but what gives?

“The private meeting,” reports NCR’s Christopher White, “took place July 29 via Zoom and was confirmed to NCR by Brandon Vogt, content director for Word on Fire Catholic Ministries.” According to White, “Vogt said the meeting of Catholic media professionals discussed the online behavior of traditionalists who ‘ruthlessly criticize the pope and bishops, and question the authority of the Second Vatican Council, often to the point of repudiation.’”

Although White states that “neither Barron nor Vogt specifically identified individuals or organizations responsible for targeted online attacks,” he opines that “much of the criticism directed at Barron has been fueled by fringe right-wing sites such as LifeSiteNews and Church Militant.”

Thanks to MW! Speaking of toxic Trads! 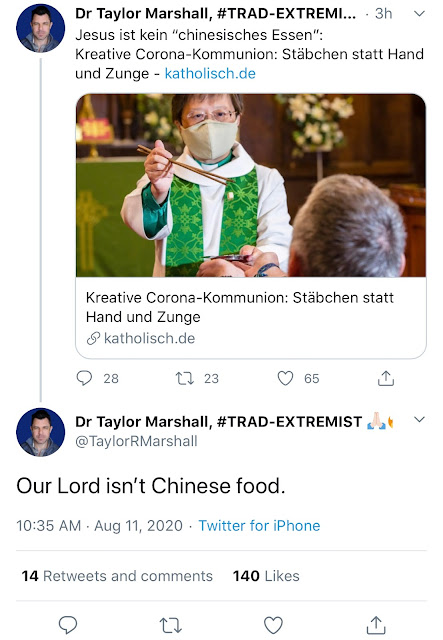 Hey check out Taylor Marshall latest Tweet on Anglican Woman Priest who is administering bread to a Anglican using chop sticks. Taylor says that Jesus is not Chinese food! What? Well Marshall that's not Jesus - its a piece of bread! LOL

Robber Barron will get dumped hard by Kamela Harris as soon as the Novus Ordo useful idiots get senile old joe elected. Very few progressives will return to Novus Ordo churches after the scamdemic has served its purpose and the child sex abuse litigation will continue to empty the dwindling coffers of NuChurch.

The biggest challenge for Tradiedom is to find ways to negotiate their way in the Church without the support and direction of bishops they trust. Practically all of them, after delivering bread and circuses to the Remnant, have chosen to keep their meal ticket and return to the Vat II church. The heroes have quit the cause of restorationism in favor of their mess of pottage. Even the constant Kazhak Schneider has to get prior leave from the Vatican to go on his Latin Mass showboat junkets. His chest thumping orthodoxy is for internal consumption. Officially he's been domesticated, neutered.
Barron is a entrepreneur and careerist who thinks the New Evangelization is about him not Jesus Christ.
So, comrades, the Trad menu is looking more and more like cannibal snacks. Just right for lockdown situations. Go for it.

The photo of the Chinese woman distributing holy communion with chop sticks should be seen as the logical destination of Pope Francis' inculturation theology. In New Jersey
home of the Jersey Turnpike automobile drive in communion is now normative. The sacrilegious possibilities for NuChurch inculturation liturgies engendered by the election year virus scam are seemingly unlimited.

The woman is not distributing "holy" anything.
This is a Protestant service. Who cares if they deal the bread out like a deck of cards?


The Bishop is just throwing his weight around. Celebrity Clerics plus a Miter makes for

Bishop Robert Barron and Michael Voris are on the same side if they interpreted Vatican Council II rationally.If they did not use the common false premise they both would be traditional on doctrine and theology. They would have to be traditional. There could not be another rational choice😊. -Lionel Andrades

Fr.Dwight Longenecker and Dr.Taylor Marshall could be united on Vatican Council II, EENS, Syllabus of Errors when they both agree not to use the false premise. -Lionel Andrades
https://eucharistandmission.blogspot.com/2020/08/frdwight-longenecker-and-drtaylor.html

, AUGUST 10, 2020
Why should a Catholic be considered a radical traditionalist when Vatican Council II without the premise is in harmony with Tradition ( EENS, Syllabus, Athanasius Creed etc)? There is no hermeneutic of rupture. If the liberals use the false premise then they are knowingly avoiding the hermeneutic of continuity.

It's important for conservative Catholics that they do not allow Bishop Robert Barron to use the term 'radical traditionalists' . Since it would mean that he has used the false premise to interpret Vatican Council II (instead of avoiding it ) and are going along with his interpret of Vatican Council II.

Bishop Barron and the Left have all these years been supported by Pope Benedict and Cardinal Ladaria.They would only interpret Vatican Council II with the irrational premise.

So this error has to be identified and made public by conservative Catholics.

Vatican Council II with the false premise ends the traditionalist/progressivist division. All have to return to Tradition (EENS, Syllabus of Errors, Athanasius Creed) when there are no exceptions mentioned in Vatican Council II. Even Bishop Barron and Fr. Dwight Longenecker are forced to do so.

There can no more be a development of doctrine by confusing what is invisible as visible,implicit as explicit and subjective as objective.

Only if there was no known salvation outside the Church can there be a New Ecumenism.

Only if we know of non Catholics saved outside the Church can there be a new ecclesiology.

Only with the false premise( confusing what is not there as being there) can there be the New Theology.

Only if there is salvation outside the Church which is an exception to EENS and so visible in personal cases, can there be the end of traditional Mission.

Only with salvation outside the Church the liberals can presently reject the Social Reign of Christ the King in all political legislatiion.

The liberals and the Lefebvrists were using the false premise but so were Catholics in general.They use of the false premise is like a virus in the Church.It could be compared to the Arian heresy of past times, when only St. Athanasius was not infected.

Why should a Catholic be considered a radical traditionalist when Vatican Council II without the premise is in harmony with Tradition ( EENS, Syllabus, Athanasius Creed etc)? There is no hermeneutic of rupture.

If the liberals use the false premise then they are knowingly avoiding the hermeneutic of continuity.-Lionel Andrades

AUGUST 9, 2020
Michael Voris has said that he called on Pope Francis to resign. He has not said that any pope who interprets Vatican Council II with a false premise to create an artificial rupture with the Creeds and Catechisms should resign. This would apply to both of the present popes who are guilty unless they choose to interpret Vatican Council II without the false premise in future.

Michael Voris has said that he called on Pope Francis to resign. He has not said that any pope who interprets Vatican Council II with a false premise to create an artificial rupture with the Creeds and Catechisms should resign.

This would apply to both of the present popes who are guilty unless they choose to interpret Vatican Council II without the false premise in future.

The popes since Paul VI had a choice.They could have interpreted Vatican Council II with or without the false premise. They chose the unethical option.

Similarly the U.S, German, English and French cardinals and bishops for example, should resign until they are ready to interpret Vatican Council II rationally.

JANUARY 29, 2020
German bishops go ahead with their liberalism based upon a false interpretation of the Council which is now obvious in the books published on Vatican Council II : Next stage of Synodal Path tomorrow
https://eucharistandmission.blogspot.com/2020/01/german-bishops-go-ahead-with-their.html

JANUARY 29, 2020
It is unethical for Pope Benedict to keep this article in German on line and mislead people. Similarly it is unethical for Ferrara and Mattei to keep promoting their books with the error.This is dishonesty.
https://eucharistandmission.blogspot.com/2020/01/it-is-unethical-for-pope-benedict-to.html
JANUARY 29, 2020
Bishop Robert Barron interprets Vatican Council II irrationally and this would be unethical even by secular standards in California
https://eucharistandmission.blogspot.com/2020/01/bishop-robert-barronw-interprets.html

If Michael Voris understood he would produce a video showing how Bishop Robert Barron needs to affirm extra ecclesiam nulla salus(EENS) and the Syllabus of Errors of Pope Pius IX since there are no exceptions mentioned in Vatican Council II.

Voris would show how Vatican Council II without the false premise is in harmony with the Athanasius Creed.

He would tell Bishop Barron that if he did not use the false premise, the lie, the subterfuge, in the interpretation of Vatican Council II,he would be traditional in Catholic doctrine and theology.

Similarly Fr. Dwight Longenecker would be traditional on EENS and the Syllabus if he would rationally interpret Vatican Council II by not confusing what is invisible as being visible, implicit as explicit and subjective as objective.

But Michael Voris does not understand. And there is no one at Church Militant TV to explain all this to him.- Lionel Andrades
https://eucharistandmission.blogspot.com/2020/08/if-michael-voris-understood-he-would.html