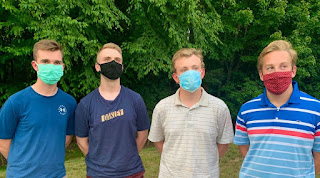 Edit: as Nick Fuentes said early on in his podcast, quoting Sloppy Steve Bannon, these people look like they’re made in a petri dish. They claim to represent values important to conservative Gen Zers, like a concern about the populism of a hijacked Republican Party, including diverse voices and support for Black Lives Matter.
Sounds like they’re being spoon fed by Alan Keyes’ buddy, Bill Kristol and his Lincoln Project.
See the discussion about this group starting at 59:00.
A group of young Republicans with Massachusetts roots have formed Gen Z GOP. From left, Ryan Doucette, Mike Brodo, John Olds and Samuel Garber. Courtesy photo

[Boston Herald] The organizers of a young Republican group who oppose President Trump say they want to build the GOP of the future by staying away from “unproductive discourse” and providing a better alternative to the left.

Called Gen Z GOP, the nationally focused group with Massachusetts roots officially launched over the weekend with a social media video that lays out a vision for a new Republican Party that attracts the newest generation of voters.

The group “vehemently opposes” a lot of what the left stands for today, said Samuel Garber, a freshman at Bates College.

An attempt by the Jews, to keep White people from leaving their clutches. We’re on to you, Kristol. It won’t work anymore. Please, make aliyah to your blessed Israel, yesterday.

Why try to change the essence of an existing party? Start your own party instead of trying to wreck the Party of Lincoln!

We want to be the party best represented by Fox TV Personality, Chris Wallace, the retarded son of Mike Wallace.

Miss Chris does not carry with him the stink of toxic masculinity or the fetid stench of that human garbage scow, Pat Buchanan. He is like a Catholic and stuff and says bad words about others like Commies and prolly call sodomites faggots when he is with his whiskey swilling buddies.

We embrace, no we publicly hug and kiss, the ass of any dubious centralising cause like


“We strive to be a GOP that pursues climate change solutions that harness American innovation and create green energy jobs,”


“A GOP that can embrace Americans of all backgrounds, proudly proclaim that Black Lives Matter and work to combat injustice and inequality.”

Well, except for the backgrounds of those we are excluding for the obvious reasons that they are bad whites and prolly Catholic and just because God Himslef did not create everybody is equal is no reason we can't have government powerful enough to take stuff from the productive and give it to the unproductive because equality; well, except for those of us to go to liberal colleges like Bates which is in Maine

JFK: The "party of Lincoln" (as if THAT's something to be proud of!) is already wrecked and not worth saving. These chubs DO represent the "essence" of the current GOP.

I thought the YAF was dead