The Freemasonic Lexicon of Eugen Lennhoff 33. and Oskar Posner and the Dialogue Between Church and Freemasonry 1974–1980

The International Masonic Encyclopedia by Lennhoff and Posner: on the left the first edition in 1932, on the right the most recent reprint of the new edition from 2000, which Dieter Binder obtained.

[Katholisches] From 1974 to 1980 there was an official dialogue between representatives of the United Grand Lodge of Germany (VGLvD) and a commission of the German Bishops' Conference. In his article "Freemasonry and the German Bishops' Conference" (in Voices of the Times, No. 6/1981, pp. 409–422), Bishop Joseph Stimpfle (1916–1996), Bishop of Augsburg (1963–1992), Knight of the Holy Sepulcre (1970), president of the above-mentioned Catholic commission, that these Freemasons of the VGLvD presented the Freemasons' International Encyclopedia (abbreviation: IFL) of the Freemasons Eugen Lennhoff and Oskar Posner as "qualified sources" to learn more about Masonic thinking. The IFL (first published in Vienna 1932) is the subject of reprints (1975ff) and a new edition in 2000, the sixth edition of which dates from 2011.

Eugen Lennhoff (1891–1944), a Jewish journalist from Basel, has been a Freemason at the Grand Lodge of Vienna since 1920, and he becomes its grand secretary. He is the editor-in-chief of the Wiener Freimaurer-Zeitung (1923-1933). Raised to the 33rd degree of the Old and Recognized Scottish Rite (AASR), he became the founder and from 1925 to 1931 the Sovereign Grand Commander of the first Supreme Council of the AASR of Austria. 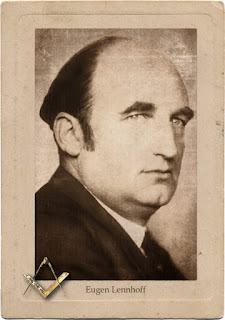 Oskar Posner (1878-1932), doctor in Karlsbad (from 1918 Czechoslovak Republic), has been a Freemason since 1910, first in a Lodge in Breslau (Silesia), then in Karlsbad and finally in Saaz (both German Bohemia). He is co-founder and assigned grand master of the Grand Lodge "Lessing to the three rings" of Czechoslovakia. He wrote the rituals of this grand lodge and a guide for lodge apprentices. From 1924, he headed the lodge magazine The Three Rings, published in Reichenberg in Bohemia. At his suggestion, the Prague research lodge Quatuor Coronati Amicorum Historiae et Philosophiae Artis Regiae Liberorum Muratorum Pragensis was founded in 1927. [1]

In the 1980 declaration of the German bishops on the incompatibility between church and lodge (cf. La Civiltà Cattolica, 1980, III, pp. 487–495), the IFL is mentioned with regard to Masonic relativism. In his doctoral thesis (PUG 2019) discussed here, Msgr. Michael H. Weninger criticizes this declaration and defends German-speaking Freemasonry. In reality, in addition to relativism, we find in the IFL much deeper reasons for the incompatibility between Church and Freemasonry, which were not dealt with by the German bishops: esotericism, magic and occultism.

Now I'll go into the IFL (edition from 1932 in unchanged reprint from 1975) and give the terms in brackets with the respective column number. 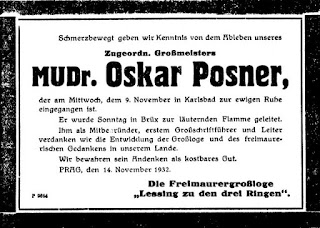 Obituary notice for Oskar Posner in the Prague daily newspaper


The spirit of enlightenment, which has existed in the roots of Freemasonry since the 18th century, is praised. The Enlightenment fights against the obscurantism of dogma (cf. Enlightenment, 105-106). Freemasonry adopts tolerance from deism (natural religion, without dogmas) (Deism, 329). Freemasonry rejects dogma, any dogma, so it is hostile to the Catholic Church (cf. Dogma, 374). The starting point of Freemasonry is not God as dogma (cf. criticism, 881–882). Masonic ethics is secular, humanitarian, not religious or dogmatic (cf. secularism, 898). Freemasonry has a relativistic understanding of the truth (see Philosophy, 1207; Truth, 1666). Relativism, aptly expressed by the Protagora's sentence “Man is the measure of all things”, is the standpoint of Freemasonry (cf. relativism, 1300–1301). Masonic tolerance is hostile to dogmas (cf. Tolerance, 1585).

I believe that with such an anthropocentric and relativistic basis, Masonic ritualism in itself is magic.

The true teaching of Freemasonry is esoteric e.i.,. reserved for the initiated (cf. esoteric, exoteric, 450). Freemasonry is experience (consecration, initiation, rebirth), it cannot be explained in words (cf. experience, 446). The ritual Masonic works are: symbolic acts to build the Temple of Humanity; a cult without dogmas and a spiritual work in which a “fluid” unites the members (cf. Symbol, 1541–46). Despite statements to the contrary, the IFL makes clear the magical character of the ritual Masonic work (cf. Work as Mysterium, 85; Kultus, Kult, Masonic, 889–890). 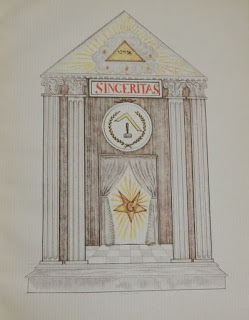 The IFL makes clear the presence of elements of esoteric / occult sciences in the symbolic-ritual system of German-speaking Freemasonry, regardless of the claims of individual Freemasons. Alchemical elements and influences can be found in the rituals and symbols of Freemasonry, for example on the topic of death and rebirth (cf. Alchemy, 41; Hexagram, 695). Also elements of the Jewish Kabbalah (cf. Kabbalah, 806–809). All ritual works are magical. In Freemasonry we find elements of magic, including the symbolism of light (see Magic, 979; Word, The Lost, 1723; Tarot, 1555). Hermes Trismegistos is an important point of reference in alchemy, magic and Freemasonry (cf. Hermes Trismegistos, 689–690). The figure of King Solomon is important for Freemasons, combined with magical, alchemical, Kabbalistic traditions (cf. Solomon, King, 1373/74). Kabbalistic, alchemical and Gnostic elements can be found in the Masonic degrees (cf. degrees, 702; degrees Schotten, 1401–1402).

The IFL combines Freemasonry with the ancient pagan mysteries in relation to the Masonic ritual of symbolic and spiritual death and rebirth (cf. Mysteries, 1080–82; initiation rite, 741; rebirth, 1701). The Masonic initiation is indelible, you remain a Freemason forever see Character indelebilis, 265f). Freemasonry is a mystical art (cf. master commitment, 1020), which enables rites and symbols to unite with God (cf. mysticism, 1087f; Unio mystica, 1620; snake, mystical, 1394). The legend of Hiram, according to which every master mason is shaped, is reminiscent of the old human sacrifices made by Masons (cf. Bauopfer, 135f). The symbolic human sacrifice (“symbolic victim death”) of the new master takes place in the third degree (cf. Hiram, 700).

The IFL rejects the accusations of Luciferism against Freemasons as fantastic and lies, especially those of the 30th degree of the AASR, which are believed to be in contact with the angel of light "Lucifer" or "Eblis" (cf. Taxil, 1558-61; Luciferian Freemasonry, 962). The IFL teaches that the initiates seek the union of opposites, the reconciliation of the enemies: light – darkness, good – evil, life – death (cf. Light Symbolism, 934). In Freemasonry, the double triangle or hexagram represents the union of opposites, including the principle of the builder and the principle of destruction (see Triangle, 379). The old dualism teaches the existence of two principles: good and evil, God and the devil (see Dualism, 387). However, I note that the logic of initiation of the union of opposites can lead one to believe in the union of god and devil. In fact, the IFL also speaks of the Freemason Mario Rapisardi (1844–1912), who in his poem “Luzifero” sings the “final victory of truth and justice” (cf. Rapisardi, 1279) and praises Lucifer against God.

The 30th degree of the AASR, the New Templar, teaches "the victory of freedom of conscience" (cf. Ritter Kadosch, 1320) and includes the 28th degree, which contains elements of alchemy and the cult of light against dogmas (cf. Sun, 1318).

In the first three degrees, the chair master of the lodge represents the logos master builder of the world. He embodies the opposites, he is the son of the sun and the moon, male and female (cf. moon, 1053). The chair master, the 1st and 2nd supervisors of the lodge are connected to the three pillars of the box of wisdom-strength-beauty and are therefore the three small lights of the lodge, i.e. light bearers (see columns, 1382f). I note that the word light bearer literally means Lucifer.

The high degree freemasonry founded by Lennhoff in Austria. This double-headed eagle has been a Masonic symbolism of the 33rd degree since 1758

Finally, I discovered that the favorite text of the IFL about the connections between Freemasonry, ancient mysteries, magic and the union of opposites is the symbolism of the mystery associations (Berlin 1924; reprint, Schwarzenburg 1979) by Freemason August Horneffer (1875-1955), which is Freemasonry connects with magic, praises magic (p. 218), praises Goethe's fist, which closes the covenant "with the devil" (p. 220), and affirms the divinity of man as a gnostic and mystical teaching (p. 234f ).

* Father Paolo Maria Siano belongs to the Order of the Franciscans of the Immaculate (FFI); the church historian with a doctorate is considered one of the best Catholic experts in Freemasonry, to which he has dedicated several standard works and numerous essays. Katholisches.info publishes him

[1] For those interested in history, a few additions from the translator (GN):

Like Lennhoff, Oskar Posner came from a Jewish family. Lennhoff came to Vienna in 1914 as a journalist, where he devoted himself to Freemasonry as a networker after the war. He also represented his grand lodge in the Association Maçonnique Internationale and from 1926 to 1930 headed the central office of the General Masonic League.

As a journalist, he initially worked for the left-liberal daily Wiener Allgemeine Zeitung, which supported the Social Democratic Workers' Party of Austria (SDAP), and became its editor-in-chief in 1924/25. In 1933 he resigned as editor of the Wiener Freimaurer-Zeitung because he became the chief editor and special reporter for the foreign department of the Vienna daily newspaper Telegraf, which appeared from 1932–1938 until Austria joined the German Empire. His left-wing radical editor Siegfried Klausner brought him to the Telegraph. The editor, owner and most of the newspaper's journalists were of Jewish descent. The newspaper was a subsidiary of the left-wing radical daily Der Abend, which was founded in 1917 as a left-liberal newspaper and became radicalized in 1918. Both newspapers were made in tabloid style with lurid titles and a mouthpiece for Socialist and Communist positions as well as popular front theses. The mother paper was therefore officially discontinued after the armed attempted coup by the left-wing radicals in February 1934 and the ban on the SDAP. One of the main opponents of both papers was National Socialism. When the Austrian government imposed precensorship in 1933, Lennhoff was appointed to the editorial team. Overall, the Telegraph corrected its line to avoid a ban. The paper moderated the course from left-wing radicalism to a more neutral one and slowly approached the government of Engelbert Dollfuss and the so-called "patriotic direction", whereby it could continue to appear after the events of February 1934. The paper now emphasized above all the shared hostility of Christian Social and Social Democrats ("proletarian party") against National Socialism. This was fought as "fascism" and ridiculed with radical language. The National Socialists called the Telegraf editorial office a "Jewish booth" and said of Lennhoff: "The Jew and Freemason leader Eugen Lennhoff, the foreign politician Bondys and representative of the Telegraf journals at the League of Nations." The newspaper was the leading and most popular tabloid in Vienna. After Austria's annexation to the German Empire, Lennhoff fled to London with the owner of the Telegraph, Karl Franz Bondy, where he continued his journalistic work against National Socialism and died in 1944.

Siegfried Klausner, who went into hiding with the Communist partisans of Yugoslavia during the war, continued his journalistic work at the daily Volksstimme, the central organ of the Austrian Communist Party (KPÖ), after the war.