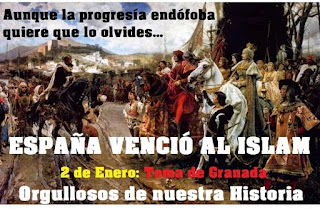 The proud moments of our history!  Although self-loathing progressives want you to forget!
On 2nd January 1492, King Boabdil (or Abu `Abdallah Muhammad XII), Sultan of Granada, surrendered Granada, Spain, to the forces of King Ferdinand II of Aragon and Queen Isabella I of Castile following months of siege.
Granada had been the last outpost of Al-Andalus in the Iberian peninsula languishing under the Moors, but then it had been re-conquered by Catholic Spaniards as the final act of the glorious Reconquista which had been a campaign running since the 1200s to expel the Moors out of Spain and North Africa.
Now we are being told that these people can coexist happily with us in a new and progressive world despite all indications that they mean to conquer us.
AMDG
Posted by Tancred at 12:52 PM

Any Muslims among them?