Cardinal Ortega was born on October 18, 1936, two months older than Pope Francis. The son of a sugarcane plantation worker was allowed to attend a grammar school. After a year at the university, he entered the diocesan seminary. With the help of the French Quebec foreign mission, Ortega studied in Canada for four years, so he did not experience the first years of dictatorship after the 1959 Communist seizure of power. In 1961, the Communists confiscated all 245 Catholic schools in Cuba and banished many priests from the country. Thousands shouted to Castro's execution squads: "Viva Cristo Rey!" (Long live Christ).

In 1964 Ortega returned to Cuba and was ordained a priest of the diocese of Matanzas. In the course of Church persecution, he was also imprisoned in 1966, because of his pastoral work as a chaplain. After his release in 1967, he became a pastor and had to serve a number of parishes often far removed
FRom one another because of the number of priests decimated by the regime.
In 1969 he became a parson of Matanzas and had at the same time to look after another city parish and two churches outside the city. 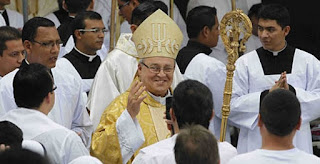 In 1979, Pope John Paul II appointed him Bishop of Pinar del Rio, only two years later, Archbishop of San Cristobal de la Habana and thus the country's primate. In 1994, the same Pope created him cardinal. As such, he participated in the 2005 and 2013 Conclaves. Then he made no bones about voting for the Archbishop of Buenos Aires. He justified this step with Bergoglio’s speech in the general congregations that preceded the conclave. This speech had impressed him greatly.

Pope Francis left Cardinal Ortega in office until his 80th year, which is rarely the case under the current head of the Church. On April 26, 2016 he was retired as Archbishop of Havana. His weight in the Cuban episcopacy was also made clear by his participation in the Ad Limina visit to Rome in May 2017, although he was retiring.


1959onwards. On the one hand, the Church was massively weakened. 150 priests were banished to Spain

alone. A serious bloodletting. Today there are about 350 priests in the eleven dioceses of Cuba. Before the revolution it was almost 900. 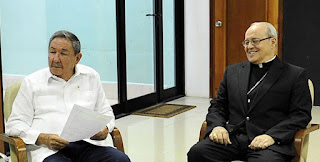 Special attention was given by the Primate to the promotion of priestly vocations. During his time as archbishop of Havana, Mgr. Ortega consecrated a total of 24 priests. The number is modest for such a long term. However, it is remarkable for Cuba, where every pastoral activity encounters state hostility.

The visibility of the Church in public space was wiped out by the Communists. However, unlike other states where "real socialism" reigned, Cuba maintained full diplomatic relations with the Holy See. The Chargé d'Affaires of the Vatican thus became a visible representative of the Church. In addition, there were attempts to replace the Church by the establishment of a schismatic, regimental parallel structure. But when success did not materialize, Fidel Castro contented himself with promoting Christianity and socialism. A serious division of the Church by Marxist left-Catholics could be avoided.


To make matters worse, that Archbishop Francisco Ricardo Oves Fernández of Havana suffered from a nervous condition and in 1980 at the age of 52 years had to be recalled. His successor was Cardinal Ortega, who had the difficult task of managing the balancing act between the primary tasks and the protection of the Church on the one hand, and the fact that the Church became the main reservoir of political dissidents on the other. One of the Catholic critics of the regime was Oswaldo Payá, leader of the Movimiento Cristiano de Liberacion (Christian Liberation Movement), who died on 22 July
2012 in a "very suspicious car accident", according to Swiss journalist Giuseppe Rusconi. 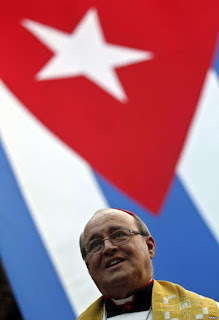 35 years Archbishop of Havana and Primate of Cuba

From the ranks of the political opposition, Cardinal Ortega was therefore reproached for showing too much restraint towards the Communist rulers. He was the "toothless adversary" of Fidel Castro.

Most recently, this criticism was raised in connection with the Pope's visit in 2015, when dissidents already known in advance were arrested and imprisoned for the duration of the papal visit. Even on the sidelines of the official appointments of Francis, there were arrests, as dissidents wanted to draw attention to their fate. Neither Pope Francis nor Cardinal Ortega commented on this, which was also criticized by Oswaldo Payá's widow. Ofelia Acevedo accused the cardinal of a "hostile attitude towards the dissidents and regime critics."

"Pope Francis knows the miserable situation of the Cubans," said the widow, who was received in 2014 by Francis in private audience. The critics of the regime had hoped for a meeting with the Pope, which was not part of his visit to Cuba.

Since 2014, European media have been talking about a "relaxation" between the regime and the Church, which is true at the political level. On the Church side, it was reached by Pope Francis and Cardinal Ortega. For them, however, a price has to be paid. The Vatican is apparently hoping for a "Christian taming" of Communist rulers, who could then remain in power, and perhaps even should. See also: 60 years of Cuban Revolution - and the Vatican celebrates a bit with.

As usual at the death of a Cardinal, the Pope sends a letter of condolence to the diocese. Unlike usual, the condolence telegram was sent to the Archbishop of San Cristobal de la Habana last Saturday on behalf of Pope Francis, but signed by Cardinal Secretary of State Pietro Parolin.

The reason is currently unknown.

Cardinal Jaime Ortega presciently copied Cardinal Bergoglio’s speech to the 2013 pre-Conclave gathering of the elector Cardinals. Many say it was that speech that inspired the Conclave to elect him Pope.
Was this the key to Bergoglio’s election as pope?
March 27, 2013 by Deacon Greg Kandra
(Retrieved from https://www.patheos.com/blogs/deaconsbench/2013/03/was-this-the-key-to-bergoglios-election-as-pope/)

"As usual at the death of a Cardinal, the Pope sends a letter of condolence to the diocese. Unlike usual, the condolence telegram was sent to the Archbishop of San Cristobal de la Habana last Saturday on behalf of Pope Francis, but signed by Cardinal Secretary of State Pietro Parolin.

The reason is currently unknown."

Castro was born in 26. I’ll bolden that bit to make it clearer.

Interestingly this obituary makes no mention of the late Cardinal's support or antagonism toward the TLM or the traditional sacramental rites. Does anyone know?

Cardinal Ortega who did the work of Christ in tandem with the anti Communist Pope John Paul II. He is now just one more saint treated with disdain by a Marxist pontiff.---I did six weeks of training at Guantanamo Naval Base Cuba in 1975. I walked down to Checkpoint Charlie where workers would file onto the Naval Base for menial labor. There were Jamaicans already on base. No women for obvious reasons at a venue with some 5000 males. Cubans would come through emaciated and derelict who could not even walk upright. This was a sign of the real effects of the workers' paradise.----According to an Orthodox priest acquaintance who was born in a European version of a workers' paradise, Bergoglio is a Communist. I also visited that same Communist country in Europe in 1975 on a Navy cruiser. Bergoglio is living in a "rat infested" mental nightmare.----I will also remark that Pope John Paul II visited my home city in 1999. I went down to see him pass the local Cathedral. I am also going to claim that I helped stop an assassination attempt.----There was a gang of Peruvian diamond thieves in the area. They hit in the outskirts of the City. I spotted their car with Tennessee license plates parked in front of the Cathedral previous to the visit, they were casing out the area for both another diamond theft across from the Cathedral as well as using this as a base to assassinate the pontiff. I got the plate number and made a report to the FBI.---JPII knew exactly the nature of evil. Bergoglio believes that the environment is what manipulates an individual into doing evil things. There is no fallen nature. There is no sin. There is no need for a Redeemer. This guy has to go sooner more than later.

Write this up, JBQ and get one of the eminent Literati to recommended it for the Booker Prize

JP2 was not a Communist. But one does not have to be a Communist to oppose Communism. Most Socialists, and even anarchists are supportive of so-called "Human Rights" because they believe in Man's Divinity without God to divide our "Communities". While JP2 believed in a God, he believed in a God of all religions as equal and in the inherent goodness of Man. "Our young will see visions, and our old will dream dreams"

@Constantine: I am not so sure that you are right. I believe that he was reaching out to other religions and not accepting them as equal. Bergoglio is another story. He is forming a new one world religion which rejects Scripture as prejudiced against other religions. As Monk the tv detective would say, "I may be wrong but I don't think so".

I’d say the Booker award oughta be renamed the Bergoglio Prize since A. ‘Pope’ Francis is a fiction per se and B. Antipope “There Is No Hell” Francis’s whole riff and schtick is the creation of a false religion under the appearance of the One True Faith.

“Rejoice! O Virgin Mary, alone thou hast destroyed all heresies throughout the world.”

That holds double for Bergoglianism as it is a modernist synthesis of all heresies. Adios.

hey sorry but apparently the rampant filth of homosex priests in Cuba was enough to discourage B16 and get him to abdicate the pontificate!

Maybe this Cardinal didn't allow/encourage his evil priests, and maybe he was hamstrung from acting by the totalitarian government in Cuba, but it needs to be acknowledged.