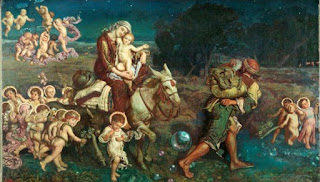 Edit: the monstrousness of the Devil is eclipsed by the beauty, innocence and holiness of His martyrs, like a Charles Lwanga and his Companions who resisted the advances of their wicked King. We can also consider this in the light of the stories about Noa Pothoven who had her life destroyed by Mohamedan mairauders and the innocent children of Belgium who were groomed and preyed upon by the St. Galen Mafia.  Also, witness the fury launched against the  their own ideological ally, Pope Francis.

[Summit News] A lesbian couple in Brazil who tried to force transgender surgery on a 9-year-old boy have been arrested after stabbing him to death.

Rhuan Maycon was murdered by his mother, Rosana da Silva Candido, and her partner Kacyla Damasceno Pessao on May 31st.
Maycon had been suffering for a year as a result of a botched gender re-assignment operation performed by the pair with no medical supervision after his mother decided he should be a girl.
Brazil’s child protection agency said the women had attempted to perform a “Kind of a sex-change surgery. After removing the penis, they sewed the mutilated region and improvised a version of a female genital organ, making a cut in the groin.”
https://summit.news/2019/06/13/brazil-lesbian-couple-who-tried-to-force-transgender-surgery-on-9-year-old-boy-stab-him-to-death/

Horrendous,what that poor child must have suffered been mutilated.

You'll never see this in the mainstream news; for obvious reasons as it throws shade on a protected group. Fox news didn't even have the guts to run it. Thanks for posting it.

Maybe this is a fabrication just like the stuff peddled in the supermarket checkout magazines: 'Man eats 25 large pizza, drinks 2 six packs of beer and explodes.'

@Casuarensis Yes, we all know that LGBT people are always good and never ever do anything that is evil or criminal. Please give me a break.

I’ll concede that the circuslike atmposphere of these perverts’ lives, which isn’t improved when they buy a child and pretend to be married, has a certain tabloid quality to them.

May our Blessed Lord Jesus Christ receive this child into his Heavenly kingdom.
-ANDREW

These lesbians must have been into witchcraft. I read the news from the Brazilian sources, and the poor little boy had been physically/sexually abused for years. GRAPHIC EXPLANATION >>>. A year prior to killing him, they had done a botched amputation of all his male genitals. The boy suffered terribly and couldn't urinate. He had some type of autism and didn't go to school. The witches/women stabbed him, several times, quartered his body, decapitated him, tore the skin off his face and other devilish things. This poor child suffered a martyr's death. Please forgive me for the graphic explanation. Rest in God's peace Rhuan.