Rome (kath.net) Fra 'Giacomo Dalla Torre, the 80th Grand Master of the Order of Malta, has forbidden that the "Old Mass" will be celebrated at the official Masses of the Order of Malta. In the letter of June 10, the Extraordinary form of the Roman Rite is to be banned at religious celebrations of the Order, which is currently causing fierce discussions in-house. The Extraordinary form is basically allowed since the Motu proprio "Summorum Pontificum" of July 7, 2007 in the Catholic Church. In England, among other things, members of the Order appreciate the "Old Mass".

Edit: I once attended a semi-reverent NO with the Ordinary parts of the Mass sung in Latin at the Maltese Chapel in Vienna during the week. Like most NO liturgies, it was a lackluster, perfunctory affair, which was only highlighted by the fact that the sacristan not only failed to genuflect as he walked out into the nave after Mass was concluded, but insisted on politicking (He was probabably SPÖ) with some people he recognized for some time, despite the surprising presence of a few Catholics trying to offer their thanksgiving afterward... if I thought it was street-level kabuki drama before, the idea of theatrical production was only heightened, based on the bald sacristan’s careless secular demeanor which had the effect of destroying the meditative qualities of the beautiful baroque chapel.

A kind reader of the blog also sent the letter: 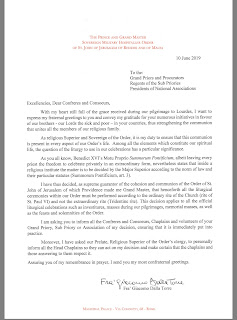 If they want to do away with the old, why not start with the Knights title and the Grand Master title, they want traditions that suit them.

Aren’t SMOM supposed to be Catholic at the minimum?

Not since Pope Francis sent in Cardinal Burke to investigate the "condom flap" and then left him "hanging in the wind". As a Cardinal Burke supporter, he was sent in to "slit his own throat" and then to apologize for using "a dull knife". Joe Stalin could not have done it any better.

Most members should just leave the order en masse and then see where it leaves them-plenty of other societies.