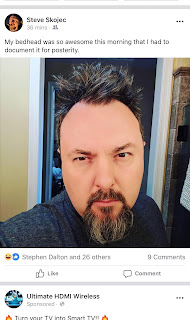 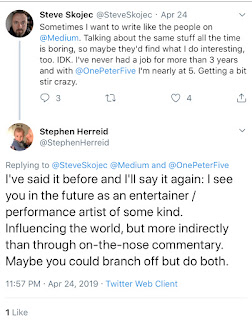 This isn't first time I've seen people say this about Mr. Skojec. (It is the first time I have seen "e-Celeb" said about him.)

Personally, I see 1P5 as too flashy for its own good. And now HW is gone? Well, good on her. She deserves a quiet life.


He’s a second generation Shea model. Less clunky, more loquacious, his artificial intelligence is more attuned to today’s Church, and he has spent a lot more time in conservative Catholic circles, processing their info and disseminating, although, like Shea, his Frankfurt School programming is full-on to address any concerns about anti-Semitism.

Orwell's Picnic was the personal/house/garden blog that I've been running since 2005. I've merely returned to it.

I must admit the main reason I look at Trad Catholic websites is for articles like this one sniping at fellow Trads. Let the inferno raging in the Church or the relevant parts of Galatians 5:20 take a backseat;I want further and prolonged episodes of "He Said...She Said..."

How’s it a case of hearsay? Steve just said he’s bored and needs to move on. He’s one of the most cannibalistic “trad” bloggers out there, and I rarely talk about him, but his confirmed fly-by-night status is certainly newsworthy.

I mentioned Galatians 5:20 for it's references to 'enmity, strife and dissensions'. I read what Steve Skojec wrote and while he's more than capable of defending himself, I don't think it's to be taken at all seriously though even if it was in earnest, I can't see how it should be a cause for gloating, other than maybe with certain Bennyvacantists who seem to have the knives out for him. 1P5 does sterling work and doesn't seem to be on the point of folding any time soon. Please save your (righteous) anger for those who are part of the problem in the Church, not those who are part of the solution.

1P5 is parasitic and Steve is a deeply flawed but self-appointed gatekeeper.

I’ve known him for a long time and he is a fly-by-night. You’ll see.

And I’m kind of missing the jocularity of his comments.

Tancred, how is 1P5 parasitic?

I've seen some of Skojec's unprovoked, personal attacks on others in private Facebook groups. Sometimes he makes Pope Francis look like a saint, to be honest. I wish he would shut up and take down the blog.


As for HW, I've yet to come across a more self-absorbed, arrogant know-it-all in my 20 years in Traddom. Chip on her shoulder to be sure, and where else to air it than Traditionalism.

These people should put down their keyboards and pick up their beads, far as I'm concerned. They're the reason so few Catholics embrace the Traditional Faith.

Well, if Mr. Skojec is looking to move on, let's leave him to it. Same with Ms. White.

I don’t think he’s serious. He’s just filling a niche market and has identified some horses he can ride till they get tired of his BS or he gets bored and rolls on like an Arizona tumbleweed.

Moreover, I don’t think anyone, especially the laity who arrogate upon themselves a quasi-Magisterial fuzzy authority like the Benevacantists, are above reproach. I hope they do get criticized, because most of them have earned a good beating.

Do they really matter that much?

People used to accuse Evelyn Waugh of that, but his accusers usually didn’t know about the good things he did, which didn’t become widely known till long after he was dead.

He called Father Feeney a lunatic. While Father dubbed him, not without justification, a “literary convert.” I’m sure the SBC was kinder to him than he deserved. Waugh was a very imperfect man, and he had the humility to admit it, despite everything.

I guess we will see, then.

No, but none of us really matter much in the grand scheme of things.

I read 1P5 now and then. He seems an intelligent sort. I do not like to see the wild-haired pictures or the cigar pictures. It's disconcerting, and reminds me of how it went with Fr. John Corapi. If running a blog or doing anything Catholic-y is anybody's bread and butter, the pressure of keeping the clicks coming is going to pile up, it would seem, and would become an unbearable pressure. These are weird times and naturally the stress is mounting on all of us. I hope things goes well for him, as well as for all of us.
He has a family that needs him, and that he needs to support. I hope he keeps his balance. If that gets tough, he should walk away and do something, anything else. This type of stuff can mess up your religion.

@Blotto:
As he does not goes to the root ("the mother") of the actual heresy that is diseminated, he es part of the PROBLEM, because most of his articles its just a criticism of the SYMPTOMS that the "church" shows up.

For example:
as ANYONE can see, the V2 is THE cause of most of the problems today, BUT HE does not ATTACK it on the THEOLOGICAL ROOT.

In other words:
He just offer ASPIRINE to "calm down" the symptoms of the modernism. not to CUT OFF the cause of it.

Another one that is angry because everyone doesn't stop in their tracks and ponder his deep insights.
He takes himself much too seriously.

Sorry, Steve, but I will not take the bait and beg you to keep blogging.

I'd like Steve to keep the 1P5 blog too. It's a good blog to get people interested in Tradition.


But of course many of the elite that paid millions of dollars for beachfront property are not too thrilled about this. Sex Pistols frontman Johnny Rotten was a key symbol of anti-establishment rebellion in the 1970s, but now he is freaking out because homeless people are making life very difficult for him and his wife in Venice Beach, and what he recently told Newsweek’s Paula Froelich is making headlines all over the nation…

He told her the homeless situation in his swanky LA neighborhood is so bad that thieves are tearing the bars from the windows of his multimillion-dollar home, lobbing bricks, setting up unsightly tent cities and littering the beach with syringes.

“A couple of weeks ago I had a problem,” the former punk prince opined. “They came over the gate and put their tent inside, right in front of the front door. It’s like . . . the audacity. And if you complain, what are you? Oh, one of the establishment elite? No, I’m a bloke that’s worked hard for his money and I expect to be able to use my own front door.”

It is more than just a little bit ironic that a man that used drugs, sex and rock and roll to shoot to global fame now sounds like a tired old crank that just wants to get the hippies off of his front lawn.

Rotten added of the punks: “They’re aggressive, and because there’s an awful lot of them together they’re gang-y. And the heroin spikes . . . You can’t take anyone to the beach because there’s jabs just waiting for young kids to put their feet in — and poo all over the sand.”

We can never get enough of that kind of action.

You expect him to live in s**t with violent lunatics at his front door on a daily basis?
$100 says you wouldnt want to live like that,what say you friend?
-Andrew

“Caritas In Veritate”; “Veritas In Caritate”, Through The Unity Of The Holy Ghost, Amen.
Why don’t you call Steve and ask him why he does not believe a Faithful Catholic is capable of knowing a Good Shepherd from one who is leading us astray?

P.S., It is important to note that in the book “My Heart Will Triumph”, by Mirjana Soldo, she claims that our Blessed Mother Mary, Loves all religions equally, making it appear as if Our Blessed Mother Mary denies God’s Commandment on worshipping false idols, while denying The Unity Of The Holy Ghost and thus the fact that “ It is not possible to have Sacramental Communion without Ecclesial Communion”, due to The Unity Of The Holy Ghost. (Filioque)

Our Blessed Mother’s Call is for Peace Through Conversion To The Word Of God Made Flesh, Through her Immaculate Heart, not accommodating that which denies The Christ.