(Rom / Brasilia) The Amazon Synod, convened by Pope Francis this coming October, wants to use the "progressive clergy" to attack the new Brazilian government. A report by the Brazilian secret service warns.

Yesterday's edition of the Brazilian daily O Estado de Sao Paulo opened with a big headline on the front page.


"The upper echelon is to fight the action for the 'left clergy'".

According to information from the Brazilian intelligence agency Agência Brasileira de Inteligência (ABIN), the "progressive clergy" wanted to use the Amazon synod to attack the new Brazilian government of President Jair Bolsonaro.

Bolsanaro’s Vice President  is Antônio Hamilton Mourão. Mourão was general of the Brazilian army. He is from the state of Amazonas and is of indigenous descent. The Amazon as a space and the indigenous peoples are, according to official Church information, the central themes of the synod. 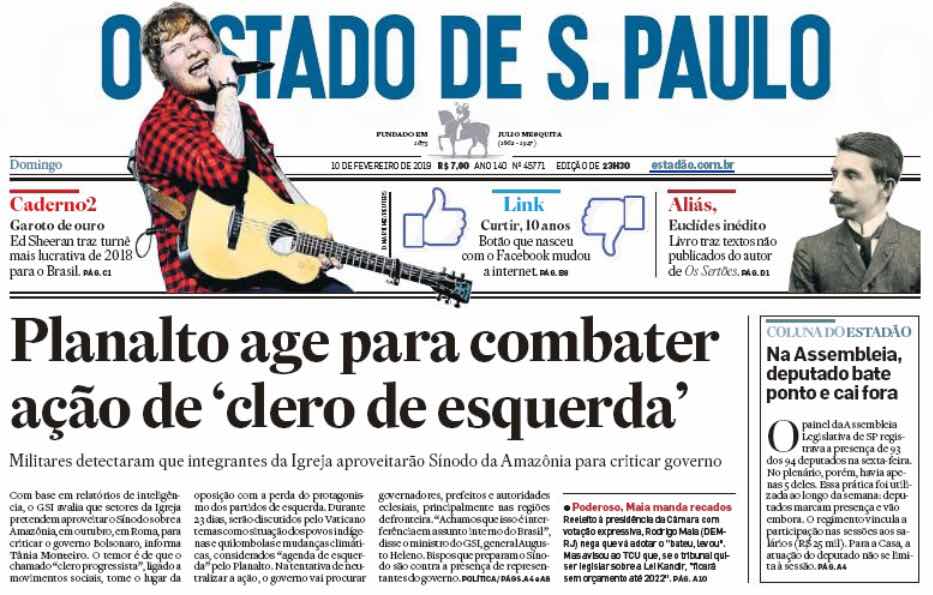 It is not part of the Synodmakers' Amazon image that the state of Amazonas was won by Bolsonaro and his coalition last fall. Since January 1, Wilson Lima of the Christian Social Party (PSC) is Governor of Amazonas. The Partido Social Cristão was also Bolsonaro’s party, until he founded in 2018 for the presidential elections his own party ticket. The Deputy Governor of Amazon represents with Carlos Almeida, the party of Vice President Mourão.

The state of Amazon spreads over a gigantic expanse of more than 1.5 million square kilometers, but is inhabited by only four million people. According to the Brazilian statistics office, only 0.1 percent of them refer to themselves as members of indigenous peoples. The Brazilian statistics office lists five "races". A quarter of the population are whites, three quarters are pardos ("browns"), which in Brazil means the different mixes of the other four races (whites, blacks, Asians and Indians).

The figures have prompted observers to assume that there is a "deeper agenda" behind the synod topics that are publicly mentioned.

The Brazilian intelligence service ABIN bases its report on its own findings and information from various military commands. The secret service report, says the daily O Estado de Sao Paulo, also discusses Pope Francis' recent meeting with Brazilian cardinals at the Vatican, which discussed the themes of the upcoming synod.

Organizer of the Amazon Synod is founded in 2014 Church network REPAM, which consists of an umbrella organization and national offshoots in the Amazon riparian states. Of real weight is only REPAM Brazil. The umbrella organization and the Brazilian offshoot are led by two Church representatives belonging to the progressive fringe of the Church. The umbrella organization is headed by Claudio Cardinal Hummes and REPAM Brazil, and emeritus missionary bishop Erwin Kräutler from Austria. Hummes and Kräutler are in favor of the abolition of priestly celibacy  nd the admission of married priests. Both have spoken repeatedly in the past for the introduction of women's priesthood. Both are close to the political left. Hummes is a personal friend of ex-President Lula, who has been imprisoned for corruption since April 2018. Kräutler is a darling of the left-wing media, as every home visit to Austria has confirmed.

The political left in Brazil, Latin America and beyond refuses to recognize Lula's condemnation. It claims that it was a political process to repress the influence of the left. Pope Francis expressed his sympathy and closeness to Lula. Even more unforgivable was Bolsonaro's election victory. The Brazilian left suffered a defeat in the fall of 2018, comparable to that of the Democratic Party in the US against Donald Trump.

Above all, Pope Francis again bet on "the wrong horse". His warning of a political electoral defeat in Brazil led to the new leadership recognizing the Catholic Church, significant parts of the Brazilian hierarchy, and the church leadership in Rome as declared government opponents.

Bolsonaro is a Catholic, his wife is a free-church member. In the election campaign, the new president has relied mainly on the Protestant free churches. Behind it is a massive emigration movement from the Catholic Church to the Free Churches. The reason is the massive political and theological left pressure in the nation’s Catholic Church which has been developing for decades and has led to an alienation of the faithful from their Church.

The Amazon Synod is pushing, as the intelligence report shows,  the intention of the world Church to install a new "other", "second" priesthood, the secular political dimension to score also by social and environmental statements in the left-liberal mainstream, but also an intra-Brazilian dimension of political explosiveness.

The impression is confirmed, with friends and opponents, that Pope Francis acts more as a politician than as a Church leader.

priestly celibacy
Posted by Tancred at 10:45 AM

Remember Lucia's image of the bishop in white and priests and nuns being shot by arrows....Google: indigenous people amazon rain forest weapons arrows. I wonder if the Synod is planned for October 13? Just sayin'

This is so very true... I live in Brazil and can witness what the communist priests do. And they are not going away, that is the sad part of it, and most of them are "good" in their career vocation so they hold high positions. And that also explains such a few genuine vocations for a such a wide country. They are forever talking politics and did not acknowledge that although the government in the last 20 years was communist nothing improved. None of them are charity prone, just the communist talk suffices for them. It is like in the US now, Presidents that are not such a good example of Christians but, but, but are a million times better than the previous demo-rats. E Habib

The Third Secret without a doubt alludes to the City of Hills which would be Rome. The "arrows" could very well be hand held Stinger missiles.