Archbishop Viganò Calls On Evil Archbishop to Do Penance

Edit: still alive and hiding in an undisclosed location, the Archbishop calls upon his brother bishop to do penance and reveal what he knows.

Part of doing Penance demands contrition. The once invulnerable McCarrick has not given any indication he is sorry for his sins. 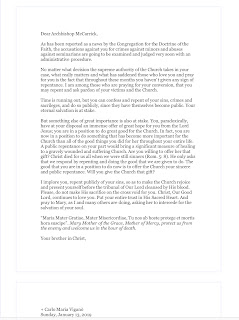 Email ThisBlogThis!Share to TwitterShare to FacebookShare to Pinterest
Labels: Archbishop McCarrick, Do Penance

Fraternal Correction. An act of mercy in itself. Whereas Francis publicly confirms McCarrick in his sins.

How do you know Vigano is still alive--because opus devil told you so? No-one's seen vigano in 6 months; only communication is from opus devil 'reporters' who write (and then publish) 'letters' to other people. Maybe Vigano will become the new Sr. Lucy and the 3rd secret of fatima -- whenever things get tight in opus devil land or need to stab a brother thief in the back (or both) manufacture another letter from Vigano to get the opus devil chorus shouting: crucify him! crucify him! Let his blood be on our heads!

What evidence have you given to anyone that you are sorry for your sins? Is that necessary to receive absolution in the Roman Catholic Church--but sure opus devil manufactures the faith as they go along just like they do at FSSP chapels--and there's one standard for opus devil's 'enemies' and another for themselves (what are Jesus' views on that).

Lifesite is now reporting that Mahony is to speak at the REC (how to evangelizing jr high stu to support illegals) Write to Archie: but they don't include their own reports that the REC has been proselytizing sodomy (and other heresies) since 2011 under him. Nor do they demand his resignation or coordinate to bring him down and send him back to Mexico w/all the illegals working cheap in Tim Busch's hotel empire and wineries.

CM, Lifesite et al don't mention Nancy Pelosi. "Trump" is verboten too this 'march for life.' Not one word about the wall. PENCE is going to speak at the Rose dinner. And meanwhile our society, nation and church are being destroyed by opus devil pharisee scum who work for themselves and blow the trumpet for themselves--whited sepulchers of stinking dead men's bones.

"However, almost seven years later, the Religious Education Congress continues to promote Mahoney’s dissident agenda with apparent impunity, at the expense of the Church’s doctrines on life and family."
https://www.lifesitenews.com/news/los-angeles-archdiocese-promotes-lgbt-agenda-at-religious-education-congres

"Sciambra said at last year’s congress, he had approached Archbishop Gomez to suggest that future congresses provide some “balance” on the issue of same-sex attraction.

“He was very gracious and listened,” Sciambra said. “About a week later, I got a call from the chancery and talked with the priest there and explained to him in further detail the problem.”

"Although Sciambra was pleased to see Courage represented this year, he said the workshop was scheduled at a less-than-optimum time in a difficult-to-find location. Only about 100 people attended, he said, compared to 600 at Father Martin’s “Building a Bridge” talk and about 400 at the transgender workshop. Also, he said, at the “LGBT” workshops, speakers promoted the other workshops in the same category, but no one mentioned the Courage workshop, which was listed in the “morality” category." [why did the lay guy have to ask archie the bishop to get morality on the agenda of Religious Ed Conf?]

"Despite a 2013 statement from Archbishop Jose Gomez, the current head of the largest archdiocese of the Roman Catholic Church in the United States, Cardinal Roger Mahony will speak at the 2019 Los Angeles Education Congress (LA REC). The topic of his March 23rd address will be "Connecting Junior High and High School Students with the Volatile Immigration Issues."

"In addition to her many hobbies of shopping, traveling and drinking Busch Bubbles, Kenzie loves to spend time with her husband Collin Vath and their two loving dogs. A mini goldendoodle named June and an aussiedoodle named Pixie. They have quite the personalities and love to visit Napa. “My favorite nights consist of family, good friends & of course a glass of our finest Trinitas wine, Cheers!" [Trinitas! Trinitas! And then will I profess unto them, I never knew you: depart from me, you that work iniquity.]

I noticed another opus devil site 'restore dc catholicism' giving a ht to canon 212. The blog owner didn't hear about donna bethell's lay christendom "important" protest against wuerl (which just happens to take place the same day as the March for Life) from her opus devil buds at lifesite news (us headquarters Christendom) or dyed, flamboyant sodomite Voris, or marcel guarnizo (who doesn't give the same sex wedded lesbian buddist communion, but stands by like the flamboyant effeminate sodomite he is as the extraordinary female minister of hospitality does and gives Christian burial to the mother who attended the lez buddhist's same sex wedding), but from canon 212: "I learned of their existence via Canon212."
http://restore-dc-catholicism.blogspot.com/2019/01/important-rally-on-friday-january-18.html


ht Frank Walker: you're being played by opus devil.

I have no idea who you are, but I know "restore dc catholicism". I'm not sure linking to an Opus site constitutes having anything to do with Opus.

I'm still reeling from finding out all those years of reading lifesite news thinking they were "prolife" and here (just like church militant and restore dc catholicism) their headlines and all their stories are about WUERL will NOT preside at the prolife mass. But hey LIARS (living off the blood of babies just like planned parenthood):

What about BABY BUTCHER PELOSI presiding over the CONGRESS?

They could have a field day w/her headline walls are immoral. She claims that she personally believes abortion is immoral, but she's pro-choice on abortion. YET NOT ONE WORD!!!!!!!!!!!!!!!!!!!!!!!!!!!!!!!!!!!
https://www.chicagotribune.com/news/opinion/zorn/ct-perspec-zorn-nancy-pelosi-says-border-walls-are-immoral-but-that-s-not-the-conversation-we-need-to-be-having-20190111-story.html

Why? Because their slave handlers, Tim 2-children Busch and the pro-abort, pro-sodomy Koch Bros., are pro-slave labor.

Meanwhile back in San Francico Cordileone is 'presiding' over the prolife 'mass.' But that's fine w/"Lifesite News" and CM. Cordileone can let nancy pelosi get away w/murder and he can fund sex worker planned parenthood and sodomy supporting groups, but only WUERL can't preside at a prolife mass.


10.23.18 USCCB Gives $240,000 to Group Promoting Planned Parenthood, Prostitution, LGBTs…Either way, the fact that COH received a grant is because he and the CCHD director for the Archdiocese of San Francisco allowed it to happen
http://www.lepantoinstitute.org/usccb-gives-240000-to-group-promoting-planned-parenthood-prostitution-lgbts/

Nope. No mention of Nancy Pelosi at all in Lifesite news 'reporting' or what cordileone is lettin go down in san francisco
https://www.lifesitenews.com/news/walk-for-life-bringing-former-planned-parenthood-workers-conversion-stories

"...but sure opus devil manufactures the faith as they go along just like they do at FSSP chapels"

Have you ever been to an FSSP parish?