(Andorra) Pope Francis telephoned the head of government of Andorra in person to warn him that should the country legalize the killing of unborn children, Co-Prince Joan Enric Vives i Sicilia, Bishop of Urgell, would abdicate. This could lead to a state crisis, as the constitutional basis would be lost, which has established the independence of the Principality since the High Middle Ages.
Andorra is a little known small state in the Pyrenees even to many Europeans. With 486 square kilometers, the land is larger than the Principality of Liechtenstein, but smaller than the Hanseatic city of Hamburg. With around 80,000 inhabitants, however, it is more populous than Monaco and San Marino together. The country goes back directly to the Spanish Marche of Emperor Charlemagne. Andorra is not part of the European Union, but it introduced the euro as its currency.
The peculiarity of the small state, however, is its state form. It is a parliamentary co-principality, that is, a monarchy. Until 1993, sovereignty was shared between two sovereigns who had governed the country since 1278 as a condominium. Since a constitution was introduced 25 years ago, the two co-princes exercise the joint office of head of state, which was largely limited to representative tasks. Co-leaders are the incumbent President of France, as the legal successor of the King of France, and the Bishop of Urgell, a city in the north of Catalonia. 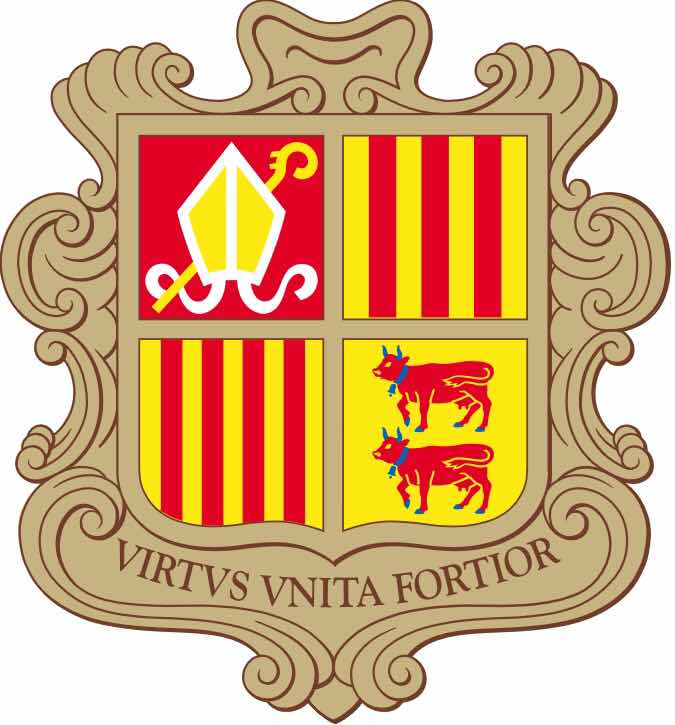 Coat of arms of the Principality of Andorra
The inhabitants of Andorra are Catalans themselves. Catalan is also official language in the mountainous country. Because of the historical border between France and Spain and once rival interests on both sides of the Pyrenees, the country could only maintain its independence through a sophisticated balance. This includes that Spanish (Castilian) and French dominate in education, although only two percent of Andorrans in everyday life speak mainly French and 37 percent Castilian. In recent years, efforts have been made to strengthen the Catalan language.
Since 2003, Bishop of Urgell is the Barcelona native Catalan, Joan-Enric Vives i Sicília. In 1993, Pope John Paul II appointed him auxiliary bishop for Barcelona and in 2001 coadjutor for Urgell. In 2003 he succeeded his predecessor in the office of bishop and was with the enthronement at the same time also prince of the Principality of Andorra, whose territory has belonged since Carolingian times to the diocese of Urgell. As Bishop of Urgell he belongs to the Spanish Episcopal Conference. In 2010, Pope Benedict XVI granted him. the title of archbishop ad personam. In the past, he has shown sympathy for the independence of Catalonia.
Since 2011, the country has been governed by an absolute majority of Democrats for Andorra (DA), a right-wing liberal party that could most likely be compared to the Ciudadanos in Spain. Prime Minister since 2015 is the architect Antoni Marti Petit. Marti originally belonged to Andorra's dominant Andorra Peoples’ Liberal Party (PLA), whose co-founder he was. Political parties have only been admitted to the Principality since 1993. After 2009, the Social Democrats emerged as the strongest force in the election and ruled the country for a short time, Marti left the PLA to found the DA.
The phone call from Pope Francis
Pope Francis now had a telephone conversation with Marti. The Principality is one of the few European countries where unborn children still enjoy protection. The killing of the unborn by abortion is illegal there. Now, even in the small country, the legalization of infanticide is being debated. Above all, there is talk of a constitutional amendment, which is intended to pave the way for the introduction of an abortion law. The same happened recently in Ireland, where in the 1980s citizens had specifically enshrined the protection of unborn life in the constitution in order to protect the country from the atrocity of child murder. A referendum approved the amendment to the constitution, prompting the Irish government to immediately initiate the legalization of abortion. The same is feared for Andorra. 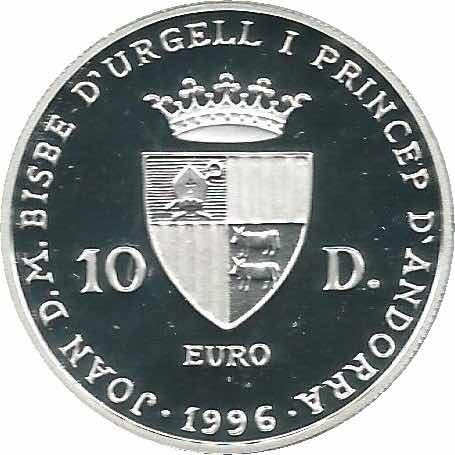 A coin of the tiny Monarchy

As the daily newspaper Diari d'Andorra reported, Pope Francis personally called Prime Minister Marti to inform him that if abortion were introduced, the bishop of Urgell would have to abdicate as a prince. It is unthinkable that the bishop would enact a law that would legalize the killing of unborn children.
The warning of Pope Francis to force the bishop of Urgell to abdicate as a prince, would eliminate an almost thousand-year-old institutional form and could plunge the country into a constitutional crisis.
The proponents of abortion among the members of the 28-member parliament were aware of the problem of wanting to introduce a law on abortion legalization, which would have to be signed by the co-opted to gain the force of law, but on the other hand the bishop of Urgell would not agree to such a law. They have lawyers looking for a loophole to introduce the law even without the signature of the heads of state. Allegedly, a constitutional lawyer has found a constitutionally "very daring" way.
Pope Francis' telephone call put a stop to efforts to introduce abortion with the help of a legal trick. Francis told Marti that he does not care about legal finesse: If Andorra should introduce an abortion law that would oblige all responsible parties, the country would lose one of its co-princes.
The head of the church should have reminded Marti that the right to life of unborn children is "non-negotiable" for the Church. A parliament could never rule against  the lives of its people. A parliament can only legislate for the protection of life. The same applies to euthanasia.
"The ball now lies with the Andorran government, which has to decide what is more important to them: to respect the right to live or to renounce the existing since 1278 state form," said the Spanish news site InfoVaticana.
Text: Giuseppe Nardi
Image: InfoVaticana
Trans: Tancred vekron99@hotmail.com
AMDG
Posted by Tancred at 11:43 AM

YAY, Pope Francis! - this is the first concrete thing I've ever heard of him doing that would make the angels rejoice in heaven

Two things occur to me:

First, I was surprised to see the French president considered successor to the French king. Odd, that.

Secondly, and more significantly, threatening abdication is a cop out. That's more-or-less what Godfried Cardinal Daneels advised the King of the Belgians; and how that formerly Catholic kingdom started down the slippery slope to child euthanasia. Thanks for nothing, Godfrey!

So, I fear that Anonymous, above, is too sanguine in re His Holiness, admirer-of-Bonino.

Based on this short article, it's not clear to me whether the Pope intends the Bishop to abdicate as a Co-Prince of Andorra upon the mere introduction of propposed legislation to allow abortion (but before its actual adoption and implementation as law), or whether he intends the abdication to occur in the event such a law is implemented over the objection of the Bishop as Co-Prince.

If the former, then it seems the actual introduction and implementation of such a proposed law could be prevented by the Prince-Bishop declining to sign, and thus ratify, such legislation. In such a case having the Bishop abdicate his position beforehand could be counter-productive and actually make implementation of abortion easier.

If the latter, then of course the Prince-Bishop should abdicate if an end-run around Constitutional procedure is done anyway and the law forced through without his consent as Co-Prince. In such a case it would be clear that the advocates of abortion have in fact precipitated the Constitutional crisis; which Constitution would have been shown to be hollow anyway, if legislation can be implemented without the consent of the state's co-sovereign.


Andorra is one of the last tax-free-haven for the white middle class, aka the commoners, outside of the EU controls. ¨All your $$$ belongs to us¨

Ergo enter Pope Francis to sow chaos and smash one of the last remaining financial independent and Catholic Kingdoms to bits.

Its really about the $$$ and control.