Pope Francis with Cardinal Cupich
(Rome) The Vatican press office announced the appointment of the Organizing Committee for the Special Summit Against Sexual Abuse by Clerics, convened by Pope Francis for February 2019 - with more than a big surprise.
From 21.-24. February 2019, a summit meeting will take place in the Vatican, as has not yet happened in this way. Pope Francis is calling the leaders of all episcopal conferences in the world to take action against the sexual abuse of minors by clerics. The subject of the meeting is "The Protection of Minors in the Church".
Yesterday the names were published, who Pope Francis appointed members of the organizing committee for the special summit. There are no lack of surprises.
Surprise 1
Cardinal Sean Patrick O'Malley, Archbishop of Boston and representative of North America in the C9 Cardinal Council, is missing among the nominees. The Capuchin O'Malley has been the President of the Pontifical Child Protection Commission since 2014. The body, officially called the Pontifical Commission for the Protection of Minors, was specially set up by Pope Francis to protect children and adolescents from sexual abuse and physical ill-treatment. Cardinal O'Malley, appointed by Pope Francis, is something of a government official on the subject. Nevertheless, he just misses the perhaps most important event in the fight against abuse.
The background to this seems to be a disruption of the trust relationship that has been dragging on since the beginning of the year.
Pope Francis with Cardinal O'Malley 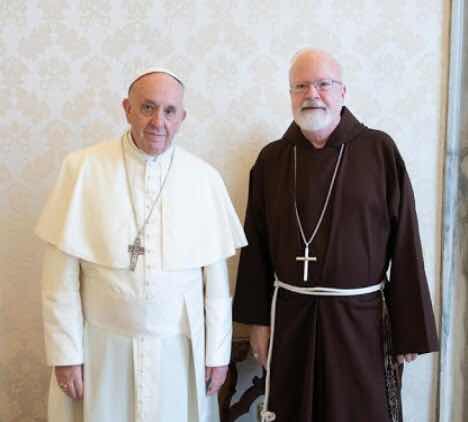 At the end of January 2018, the US Cardinal's collapse over the dismissal of Pope Francis on abuse victims of the Chilean priest Fernando Karadima, because they had criticized the appointment of the Karadima Zöglings Msgr. Juan Barros Madrid as Bishop of Osorno. Francis subordinated them during his visit to Chile and again on the return flight to Rome "slander". His reasoning was that he had never been informed of any specific allegations against Barros. Had he received such, he would have acted.
Apart from the fact that Pope Francis is vindictive, the current personnel decision suggests that the Vatican fears that Cardinal O'Malley could not agree to the "solution" that he was aiming for in February. There is a reason for that.
Surprise 2
While excluding Cardinal O'Malley, another US Cardinal, Blaise Cupich, the Archbishop of Chicago, has been appointed to the Organizing Committee for the Abuse Summit. Cupich's senior position, as archbishop of the most important Catholic diocese in the US and as cardinal, is a creation of Pope Francis. He is considered the "man of the pope" in the American Bishops' Conference and spokesman for the progressive direction in the US Church.
The appointment of a senior US representative to the organizing committee stems from the fact that this local church is currently the most affected by the sexual abuse scandal. This is inextricably linked to the name of ex-Cardinal Theodore MrcCarrick, who had to vacate his seat in the Church senate at the end of July when even the New York Times reported on his gay double life and the sexual corruption of his own seminarians and priests.
US Cardinals appointed by Francis: Tobin, Farrell, Cupich attributed to the McCarrick group. 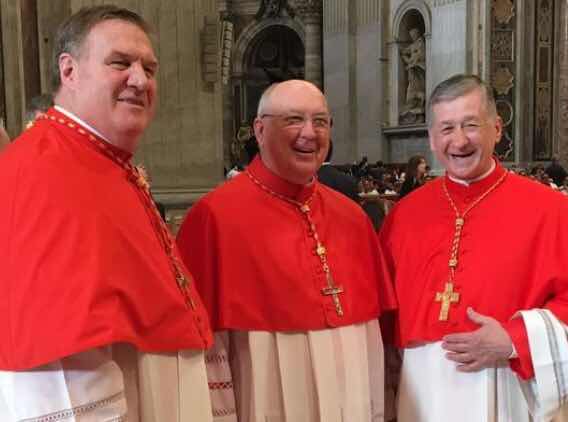 Cardinal Cupich is credited to the McCarrick Circle in the US Church. He therefore does not seem to be the most credible Church representative on abuse prevention. More credible representatives like Archbishop Charles Chaput of Philadelphia, however, are consistently cut out by Pope Francis, because they have a more traditional understanding of the Church and do not belong to the progressive circles that want to promote Francis.
Cardinal Cupich, on the other hand, honored Cardinal McCarrick with a prize  as an “exemplary bishop" in 2017. Cupich's appointment to the Organizing Committee underscores not only his closeness to Pope Francis but, more than anything else, his unwavering commitment to protect the McCarrick clique.
Cardinal Cupich promptly expressed his solidarity with the homophile Jesuit James Martin in the mentioned exchange for the program of the World Family Meeting.
Last but not least, Cupich’s nomination confirms what has been suspected in recent days of Pope Francis’ intervention. The Church leader had banned the US bishops shortly before the beginning of the autumn plenary session to take decisions against sexual abuse. The intervention is in many respects unusual and daring, for almost at the same time the French Bishops' Conference of Rome was able to make almost unanimous decisions.
The papal measure was directed against the majority of US bishops against whom Francis leads his private campaign as against US President Trump and overall "religious rights" in the US. It has been suggested by various sources that the McCarrick clique is afraid of an independent commission of inquiry and plans to remove bishops who are guilty of sexual offenses or failure to officiate. This refers to offenses not under state criminal law, but according to the stricter church law, which also includes homosexuality.
It became known that the Cardinals Cupich and Wuerl worked for weeks on an "alternative" solution. Instead of an independent commission, ecclesiastical hierarchs, especially the metropolitans, should be left to exercise their sovereignty in cases involving allegations against bishops - bishops such as McCarrick and Wuerl (see also The Homo Cardinals).
When the US bishops gathered in Baltimore last week announced that Pope Francis' "desire" to make no decisions was "emphatic", the President, Cardinal Daniel DiNardo, could barely hide his bitterness. The mood among the bishops was described as "shock". Cardinal O'Malley responded, after all, as he soon realized, he was not only at risk as a diocesan bishop and as chairman of the Pontifical Child Protection Commission. He made a statement announcing that despite the papal gag, nothing would change about the "zero tolerance" against sexual abusers.
But that does not seem to be what you want on the top floors of the current Church leadership.
Agenda
Pope Francis justified his intervention against the US bishops with the special Summit on the same topic called by him anyway. But he did not say that to the French bishops. The non-appointment of Cardinal O'Malley and the appointment of Cardinal Cupich to the organizing committee for the special summit, therefore, suggests something. It comes close to a preliminary decision. For Cupich is not credible for a thorough cleansing of the Church, which many Catholics see as a necessary condition for renewal.
Other members of the Organizing Committee are, besides Cardinal Cupich, Cardinal Oswald Gracias, Archbishop of Bombay, President of the Indian Bishops' Conference and representative of Asia in the C9 Cardinal Council; Archbishop Charles Scicluna, Archbishop of Malta and recently also Assistant Secretary of the Congregation for the Doctrine of the Faith, responsible for the cases of abusers of abusers; as well as the German Jesuit Hans Zollner, President of the Child Protection Center of the Pontifical Gregorian University and member of the Pontifical Child Protection Commission (see Garden Goat  - Pedophile Friend in the Center for Child Protection at the Pontifical Gregorian University).
According to a statement by the Vatican press office, the special summit will include the heads of the Catholic Eastern Churches, the "superiors" of the Vatican Secretariat of State, the Prefects of the Congregation for the Doctrine of the Congregation of the Faith, Congregation of Religious, the Congregation  of Clergy, Congregation of Bishops, the Dicastery of the Laity, Family and Life, the Presidents of the Episcopal Conferences and the Presidents of the Unions of the Superiors General of the Catholic Order of Women and Men.
The fight against sexual abuse, the rescue of the progressive and homophilic McCarrick clique and a paradigm shift in Catholic moral teaching through the recognition of homosexuality, equals a squaring of the circle - and this should also overtax Pope Francis.
Text: Giuseppe Nardi
Image: Vatican.va (screenshots)
Trans: Tancred vekron99@hotmail.com
AMDG