Madison, Wis., Nov 25, 2018 / 08:23 am (CNA/EWTN News).- Bishop Robert C. Morlino of Madison died the evening of Saturday, Nov. 24, at St. Mary Hospital in Madison, Wisconsin, the diocese has announced. He was 71.
On Friday, the Diocese of Madison issued a statement saying that Morlino had suffered a “cardiac event” while undergoing scheduled medical tests on Wednesday. At the time, he was initially reported to be “resting.” On Saturday, Vicar General, Msgr. James Bartylla released an urgent prayer request saying that things had taken a turn and “it is likely that our hope lays in a miracle at this point.”
Six hours after the Diocese of Madison published Bartylla’s prayer request, the diocesan Facebook page posted that Morlino had died.

Edit: remember when Mark Shea was this  supposed posed to be this really great conservative blogger who sort of inspired people with his example and pious words? 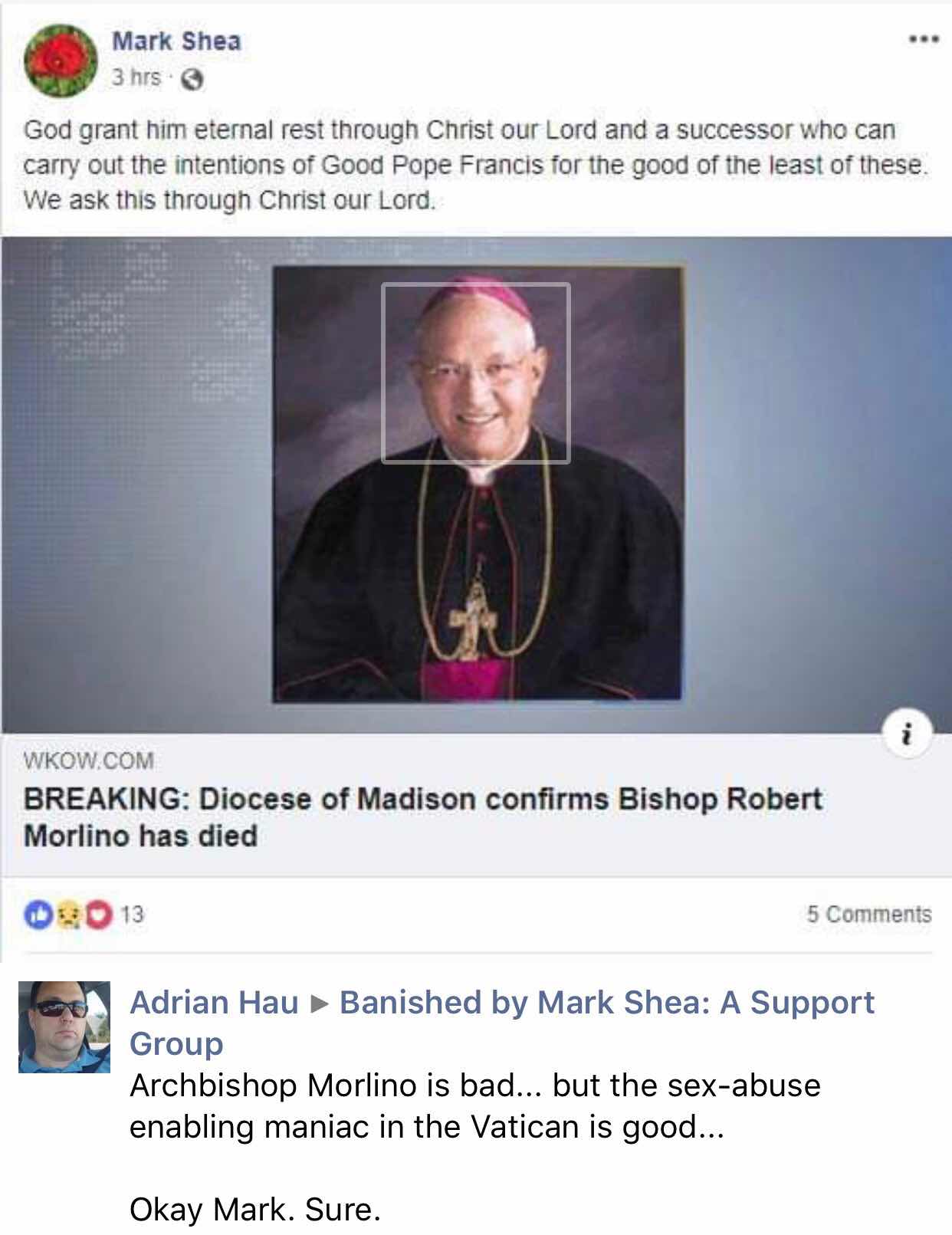 When a surname is an acronym

Mark Shea is one of the biggest bloggers existing and he is well-known as a man who routinely returns to the vomit of his rebarbative rhetoric almost immediately after he has been constrained by conscience to apologise for his latest execrable attack against some Catholic Traditionalist or secular conservative.

However, most men do not realise his surname is an acronym:

Mr. Shea is the Morton Downey Junior of Catholic apologetics and if you do something he disapproves of he will attack you

What does that make Gaybriel?

It also makes Morlino a now deceased, authoritarian and hopelessly dysfunctional bishop who is now negotiating with God. It makes a lot of those pampered lacy boys in his diocese very nervous. Zuhlsdorf, the vagrant cleric and entrepreneur from Villetri Segni must be reaching for the danger diapers as he anticipates a call from the Nuncio telling him to return to Rome.
BTW, who is Gaybriel?


NOVEMBER 28, 2018
Oath of Fidelity of Bishops has become an Oath Supporting Modernism. It is infedelity with the past Magisterium
https://eucharistandmission.blogspot.com/2018/11/oath-of-fidelity-of-bishops-has-become.html


If only we could jettison the past and have a truly up to date Church without the accretions of centuries I’d obscurantism and ignorance. If only priests could marry like their counterparts in the dying Protestant denominations, Catholicism could be the NGO and avant garde museum piece it already is in Europe among them.

Btw, who is Peter W?

On November 9 I e-mailed this blog post to Bishop Robert Morlino. He then died.1
Bishop Morlino and Fr. John Zuhlsdorf interpret Vatican Council II like Archbishop Guido Pozzo.
Archbishop Pozzo would be willing to officiate at the funeral Mass for Bishop Morlino.
He re-interprets the Nicene, Apostles and Athanasius Creed and offers the Latin Mass.
He re-interprets extra ecclesiam nulla salus as a rupture with the Magisterium of the 16th century and offers the Latin Mass.
He re-interprets Vatican Council II and the Catechisms as a rupture with EENS and is allowed to offer the Latin Mass or Mass in English.
All this would be heresy in the 16th century and he would not have been allowed to offer Holy Mass since he would be in sacrilege.The Mass would be sacrilegeous for him.
Today he has no problem since he has the support of the political Left.
He knowingly flouts the liturgical theology and teachings of the Church and we have to go go up to him to receive the Sacraments.
He will not issue a denial and claim I am wrong since his priority is to please the world and not God.Truth is not a priority.
He will not say, "Lionel is wrong. I affirm the strict interpretation of EENS". He knows he does not affirm EENS and wants to carry on in this way.
He will not say, "The baptism of desire(BOD), baptism of blood(BOB) and being saved in invincible ignorance(I.I) refer to invisible people, speculative and theoretical cases." He and the Congregation for the Doctrine of the Faith(CDF) are not interested.
He would interpret all Magisterial documents with visible-for-him BOD, BOB and I.I to create a rupture with Tradition.
He will not announce that he is going to interpret Vatican Council II with hypothetical cases just being hypothetical.This is anathema for the political Left and ecclesiastical Masonry.
He will probably be part of the Vatican-SSPX Doctrinal talks and will make sure his heretical views will be considered the Deposit of the Faith.
He knows that there is a mistake in Vatican Council II which was not known to Archbishop Lefebvre and Bishop Bernard Fellay but will not announce it.
The same mistake was made by the CDF ( Holy Office 1949) in the Fr. Leonard Feeney case.The CDF wanted Fr.Leonard Feeney to accept that invisible cases of BOD,BOB and I.I were visible exceptions to EENS. Fr.Feeney had to accept the CDF (Holy Office) Letter in 1949.It says not every one needs to be a member of the Catholic Church for salvation.So it contradicted the dogma EENS defined by three Church Councils-and that too with an irrationality,assuming invisible people are visible.
Fr.Leonard Feeney who offered the Tridentine Rite Mass, is slandered on Wikipedia,EWTN, Catholic Answers etc and Archbishop Guido Pozzo. Ecclesia Dei and the CDF do not defend him.
With all this irrationality and heresy the Archbishop would be willing to officiate at funerals and weddings.
According to Canon Law Archbishop Pozzo like the present two popes should not be allowed to offer Holy Mass .Their mortal sin of faith is an impediment- Lionel Andrades

Robert Morlino, for his part, has finished doing any thing while Zuhlsdorf is having a whale of a time in Paris at the moment on the dime of his readers. It will be only a matter a few months after a Vatican II - Pope Francis minded bishop sends him back to Villetri-Segni where he is incardinated. One can only imagine what the Italians will do with that clown.