Turbulent Appointment Process for New Substitute for Secretary of State

The new substitute of the Cardinal Secretary of State has not been able to take up his post and is already in the crossfire of an anonymous dossier.
(Rome) Today, Vatican diplomat Edgar Pena Parra will take up his post as the new substitute of the Secretary of State. The Venezuelan was appointed last August 15 by Pope Francis as the successor of Curial Archbishop Angelo Becciu. For several days now, a dossier on the new substitute has caused dismay in the Vatican. After the scandal surrounding McCarrick and the scandal Coccopalmerio, does this threaten to be the next scandal that shakes the pontificate of Pope Francis?
After the relationship between Cardinal Secretary of State Pietro Parolin and his substitute Becciu things have become more and more tense, but  both are familiar to the Pope. Francis intervened last May to resolve the situation. He appointed Becciu Prefect of the Congregation of the Causes of Saints and at the same time made him Cardinal.
From Maracaibo via Maputo to Rome
Titular Archbishop Edgar Pena Parra comes from the archdiocese of Maracaibo and was ordained a priest in 1985. After studying Canon Law, he graduated from the Vatican Diplomatic Academy and joined the Diplomatic Service of the Holy See in 1993. In 2011 he achieved the rank of apostolic nuncio. Most recently, he represented the Holy See in Mozambique.
"On the other side of the Tiber, a dossier has been circulating for weeks about the allegedly immoral behavior of the prelate", according to the weekly magazine L'Espresso.
Pope Francis and Nuncio Pena Parra substitute 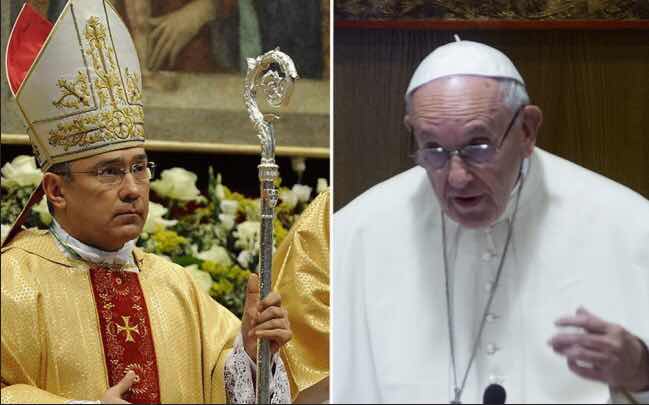 The article does not come from Sandro Magister, the Vaticanist of the newspaper, but from investigative journalist Emiliano Fittipaldi. Fittipaldi was already sitting in dock of the Vatican Court for the Vatileaks 2 scandal, but was acquitted.
The closest intimate conspirators of Francis see in the dossier a "new ambush by the conservative front" against the pope, so says L'Espresso.
The appointment as substitute makes the Vatican diplomat number three in the Roman hierarchy. He'll be right behind the Pope and the Secretary of State. For Pena Parra this means a big career jump from the margins to the center of the universal Church. Because of the importance of the office, the appointment was "extremely sensitive," according to the weekly magazine.
With the appointment of the diplomat, Francis surprised the Roman hierarchy, as Pena Parra is more or less unknown in the Vatican. "While the nuncio in Rome appears like a Martian, many in Venezuela know him," says L'Espresso. Not everyone appreciates him.
Pena Parra in the Viganò dossier
The latter includes Nuncio Carlo Maria Viganò, the former Apostolic Nuncio in the US and author of the Viganò dossier, which was published on 26 August, and caused the church leadership considerable difficulties. Viganò accused Pope Francis of having known of the gay double life of Cardinal Theodore McCarrick, and of having made McCarrick his confidant for the US since June 2013, instead of taking him down. Nuntius Viganò has been calling for Francis's resignation ever since.
In his dossier there is also an indication of Pena Parra. Viganò writes that the Venezuelan has close connections to the primate of Honduras, Cardinal Oscar Rodriguez Maradiaga. From 2003-2007 he worked at the Nunciature in Tegucigalpa. Cardinal Maradiaga himself is at the center of a scandal in which he remains exhonerated, at least so far, but had to sacrifice his Auxilaey at the end of July, a Bishop whose aberrosexual double life had exploded into the public eye. Officially, Bishop Pineda was retired at his own request. In this way, any suspicion should be kept away from Cardinal Maradiaga, critics say. Literally Viganò writes this about Pena Parra:

"Disturbing information that concerns him came to me from those responsible for Papal Councils.”

The apostolic nuncio does not elaborate in his dossier on what "worrying information" it was. "It is certain that not only Viganò has doubts about Francis’ decision," said the weekly magazine.
The dossier Pena Parra
Nine days after Pena Parra's appointment, the paper in the article published yesterday, someone wrote a "very harsh report on allegedly immoral behavior of the priest." The report was accompanied by photocopies of documents signed by the then archbishop of Maracaibo, Domingo Roa Perez. They refer to doubts and serious allegations against the then seminarian Edgar Pena Parra. Msgr. Roa Perez was from 1961 to 1992 Archbishop of Maracaibo in Venezuela. He passed away in 2000.
The dossier Pena Parra covers 25 pages and is signed with "laity of the archdiocese of Maracaibo". A few days ago it was sent by e-mail to several prelates who immediately informed Pope Francis - and L’Espresso.
The core of the dossier is a letter written in 1985 by archbishop Roa Perez to the Rector of the Archdiocesan seminary of San Cristobal attended by the young Pena Parra. After studying philosophy in 1985, he had just completed his studies in theology. He was to ordained a priest in August. Archbishop Roa Perez, "who for some time had doubts about the candidate, had just received an anonymous letter," says L'Espresso. The information was so concrete that he took it seriously enough to seek more clarity.
The Archbishop informed San Cristobal Rain, Pio Leon Cardenas, that the reports on the behavior of the young Pena Parra were "quite negative", which is why they did not want to dismiss him from the seminary, but did not want him to continue there.” Hoping that the situation would not be so explosive, he decided to send him to another seminary where he had to continue his studies, and to put him under special observation. From Caracas, where he studied theology, came "quite positive reports," so that the decision was considered appropriate to admit him to the diaconate and shortly thereafter to priestly ordination. "Now I received an anonymous letter from Caracas stating that after the third year Pena Parra was dismissed from the seminary of San Cristobal: for homosexuality." The case was not known because a priest of the archdiocese had falsified of the report on Pena Parra.
Intrigue or truth?
The archbishop ended his letter to the Rector with the sentence: "I do not know if it is an intrigue. You will understand what inner distress affects me. I desperately need priests, but I can not be a 'miserable atheist,' as a saint of the Church says, referring those to consecration who are clearly unworthy. As I said, it can be an intrigue, but it can also be true, which the anonymous writer emphatically claims. I vehemently ask you to check the matter.”
The fact is that Pena Parra was ordained a priest. For Archbishop Roa Perez, the suspicions seem to have not been substantiated. Does someone play with fake cards to harm the new substitute?
L'Espresso asked the Vatican Press Office for an opinion on the dossier, in particular as regards its authenticity, without receiving an answer.
"But it is a fact that the pope, after being informed of the dossier, resolutely stated that he did not believe in the validity of the allegations."
Francis had told his confidants that the dossier was, “like Viganò's attack against him.”
The papal entourage is therefore certain that it is "always the conservative front that seeks to discredit its magisterium and the prestige of its most faithful.”
Fittipaldi concludes with an astonishing remark:
"A few days ago, the Prefect of the Congregation of Bishops, Marc Ouellet, efficiently refuted the most serious allegations of the open letter from Viganò. The new affair shows that the attack on the pope is far from over. "
The remark astonishes because Cardinal Ouellet reprimanded Nuntius Viganò sharply, but at the same time substantively confirmed his central points. The cardinal's defense reads more like an indictment of Francis whom he defends.
Text: Giuseppe Nardi
Image: L'Espresso (Screenshots)
Trans: Tancred vekron99@hotmail.com
AMDG
Vatileaks 2
Posted by Tancred at 1:36 AM

There is no doubt at all any longer through the eyes of Vigano that a homosexual culture has taken over the Vatican. This is being aided and abetted by the pontiff.

How many times does it have to be that the postVatican 2 laity and hierarchy seem to think and want to break the connection between the Right and the Church. By definition the Church Is the Right.When we go back since the time of the early Enlightenment, the Right was formed as a Reaction against anticlericalism that took form in the shape of the Left. The people who defended the Church were Rightists. The opponents of the Church were called Leftists.This is how this polarity came to be. And those in-between, are those in varying degrees of sympathy or antipathy for the Church. For Vatican II leftists, they think that they can separate themselves from dependence from the Right. But to the extent that these Vatican II Conciliarists try to separate themselves, the more the Church goes down. And the more the Vatican II Church tries to attack and separate themselves from the Right, the more a new Right is created that is secular Nationalist or National Socialist- a new Religion to substitute Christianity

This is all about the creation of a one world socialist government. If you read Malachi Martin's "The Jesuits", you will have total insight into the Jesuit agenda.

Everything is in a state of collapse. Come Lord Jesus!

It would be of enormous benefit if someone translated Nardi into intelligible English.

It will be of enormous benefit for your soul if you stop deceiving people using multiple nicknames, stop with your subtle malevolence and desist from reading blogs completely.

@ Rab: Jorge? Is that you? Such Phariseeic judgementalism! But, of course, you like to project on others the same behaviours you accuse others of.