In Italy, the new edition of the Missal Romanum is about to be printed. The Episcopal Conference emphasizes the "irreversibility" of liturgical reform.

(Rome) The Italian Bishops' Conference will decide on the third edition of the Missale Romanum of the Novus Ordo in mid-November. Initial announcements have startled some liturgists.

For some time now, there have been voices announcing important decisions for the forthcoming Extraordinary General Assembly of the Italian Episcopal Conference. In the period from 12th — 15th of November, the third edition of the Missale Romanum in the ordinary form of the Roman Rite in its final version is to be decided and released for publication. The daily Toscana Oggi announced "revolutionary" innovations, without giving any details. 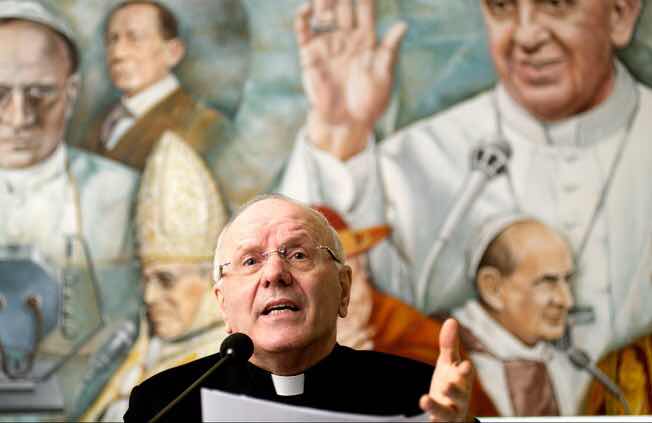 Bishop Nunzio Galantino, from 2014-2018 the "man of the Pope" in the Italian Episcopal Conference

The Standing Council of the Episcopal Conference, which took place from 24-27 September in Rome, has made decisions in preparation for the Extraordinary General Assembly. Its motto is: "Rediscover and accept the gift of the liturgy for the life of the Church. Perspectives and Pastoral Decisions on the Third Italian Edition of the Missale Romanum."

The preparatory work for the new edition was led by Bishop Nunzio Galantino, whom Pope Francis had made Secretary General of the Italian Episcopal Conference, and who was considered to be the "Pope's man" in this office. Last June, Francis promoted him to the Roman Curia as Prefect of the Administration of the Patrimony of the Apostolic See (APSA).

For the new Missale the Permanent Council announced only so much:

"It represents the opportunity for a capillary formation that returns the richness and immutability of the liturgical reform and its essential points: the centrality of the Word of God, of Easter and of the congregation itself. Hence the need to re-learn itself as an art of celebration which not only avoids the urge to self-promotion or the use of traditionalist forms, but promotes a comprehensive understanding of roles:
priests, lecturers, greeters, cantors ... move exclusively in the line of service alone.”

Details were not communicated. The Declaration mentions as the "center" of the liturgy "Easter", the "Word of God" and "the assembly itself". The sacrificial character of the Mass remains unmentioned. The leadership of the Episcopal Conference also took up a statement by Pope Francis, which is understood by parts of the Church as a challenge: The liturgical reform is "irreversible" and "traditionalist forms" should be avoided. The latter are put on the same level as the “self-promotion” of progressive clerics who deviate from the rubrics and even the texts of the masses, sometimes even from the Eucharistic Prayers, and make their own brand of liturgy.

Pope Francis said in his address to the participants of the 68th Liturgical Week in Italy on 24 August 2017 that the liturgical reform of Paul VI. Aid “irreversible.” Francis said this with a magisterial tone.

"We can confirm with certainty and with official authority that the liturgical reform is irreversible." [Has he read Quo Primum?]

Without mentioning it, the words were understood above all as a rejection of initiatives by Cardinal Robert Sarah, the Prefect of the Roman Congregation for Worship, and the Order of the Sacraments. Cardinal Sarah had previously emphatically called for "all priests" of the Latin Rite to return to the traditional celebration of the East, ad Deum.

A few months before the pope's speech, the existence of a mysterious liturgical reform was announced, commissioned by Francis. At the time of its construction Cardinal Sarah was simply ignored. In other words, the Commission and its members were appointed behind the back of the competent minister.

Cancellation of "reform of the reform"

In a broader sense, the words of Pope Francis were above all a rejection of the “reform of the liturgical form” initiated and desired by Pope Benedict XVI.  This refusal was taken up by the Permanent Council of the Italian Episcopal Conference at its recent session. Since then, there has been concern in traditional Church circles that the new edition of the Missal Romanum will further reduce the sacrificial character of the Mass and emphasize the character of the assembly even more.

Nothing is known for the time being, whether in the new edition finally the change of the words of consecration by Benedict XVI. from "for all" to "for many" will be implemented. Benedict XVI. had made a corresponding
change in October 2006 and arranged it for the Universal Church. In Italy, there was particularly stubborn resistance in addition to the German-speaking region. This is especially clear from the fact that even twelve years after the binding order of the German Pope, the change in Italy has not yet been implemented.

The false church continues its march...until Our Lord devises His "whip" and turns them out.

Actually, problems with the liturgy are worse than with issues dealing with sex abuse. I believe that sex abuse is a direct result of dysfunction in the Church. There is no "right and wrong" and evil is proliferating because it will not be labeled as such. The liturgy is mainstreaming aberrations. Instead of preaching right and wrong from the pulpit, the priest has become nothing more than a mascot who is a cheerleader from the gutter.

Why doesn't Cardinal Bourke et al elect a proper Pope for us to follow and The Bergoglio can go and swim.They have the Churches but we have The Faith.It will happen you know.For Christs sake i am sick of Bergoglio and his Modernist filth.

Sixty years ago they replaced the Liturgy of Ages without any reference to the Laity. Now they are replacing that replacement with another, so how can it be now stated that this new liturgy is irreversible? If that were so then the Liturgy of Ages was also irreversible which many of us believed was the case then. Also, these prelates were the ones who ignored St. JPII's rules governing papal elections, & are doing their utmost to change the Ten Commandments (written by God in stone), allowing unrepentant sinners HC & normalising Sodomy, so who are they to categorically state that such blasphemy & irreverence to God's Will can never be changed. Of course it will & indeed must be changed & I really wish the silent cardinals would call for a council so that this apostate pontificate can be annulled soonest. It should have taken placed two years ago!

Irreversible? These Italian bishops sound a bit too rigid for my liking.

Blotto, I would love to hear that question put to PF. "Are the V2 changes irreversible? Isn't your position the definition of being too rigid?"

Obviously anyone using the 'Extraordinary Form' hasn't either.

The way the Conciliarists used obsolete (50 yrs obsolete) phsychological terms like 'rigid' shows they are men of a particular time and place now past. The way too they repeatedly call the so-called 'New Mass' irreversible, suggests they are at least aware of that its expiry date has passed. Italy seems to have some appalling Conciliar bishops, but they are yesterday's men.

Irreversible? That's what the Fathers of Trent said. One day the Church will rediscover the sublimity, mystery, awe, and reverence of the Mass by looking not only to Trent, but all the way back to Calvary.

Fortunately, JK, the God of Surprises permits rigidity in certain circumstances that are favorable to the modernist mania.

So, the giddy atmosphere, the primacy of the assembly, the eschewing of the sacrifice, and trite music in the Novus Ordo is irriversible? And, they wonder why for every new convert four leave the Church.

Gerald, it's been one of the things I've seen over and over again in 30 years of being conscious of this drama, the double standards when it comes to authentic Catholicism versus AmChurch innovations created by the usual suspects who want a backdoor authentication for their debauchery on Saturday night and slouchery come on Sunday morning.

The Mass in Latin with all of the signs of the Cross restored, and each word and gesture of Jesus at the Last Supper as prayed down through the centuries, in obedience to Pope John Paul 2 and Benedict 16th needs to be implemented. .. In spite of every attempt to restrict it.