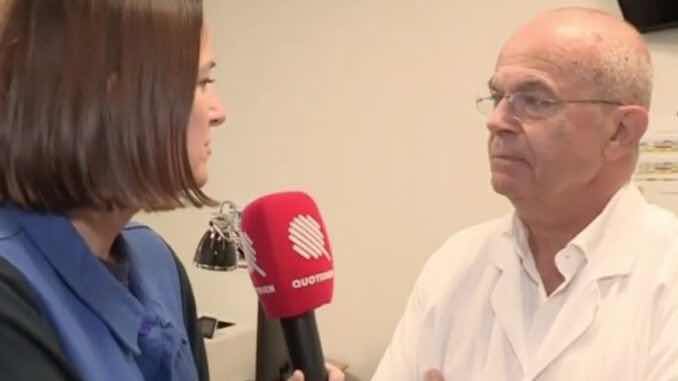 TV interview with Bernard de Rochambeau: "Abortion is Murder".
(Paris) Statements by Bertrand de Rochambeau,  President of the gynecologist association Syngof, the largest association of women's gynecologists and obstetricians in France, caused a great stir in France. The well-known gynecologist made only a factual statement.
De Rochambeau said on September 11 in an interview for Quotidien TV channel TMC, why he does not perform abortions. His clear and logical justification: Because abortion is murder. The doctor said:

"We are not here to kill lives".

De Rochambeau relies on freedom of conscience. The French abortion law, Loi Veil, enshrines the right to conscientious objection.
The journalist responded by saying that the law did not speak of killing a human being and asked de Rochambeau if abortion was murder. The gynecologist answered without hesitation:

"That's my belief, because that's the reality."
Thus, he drew on himself, just as the show was broadcast, the aggressive reaction of the French Minister of Health, Agnes Buzyn. "Nothing and no one" should "hinder" abortion, said the Minister in a press release signed with Marlène Schiappa, State Secretary for Gender Equality.
The writer Schiappa is a radical feminist from a Trotskyist family, who became a member of the Socialist Party (PS) in protest against her father. Since 2017 she belongs to Macron's movement La République en Marche (REM). With her State Secretariat, she promotes gender ideology and participated last June as the first French member of government in San Francisco (USA) at the oldest “Gay Pride” in the world. Since last year she is in dispute with France's gynecologist. Israel Nisand, President of the French professional association of gynecologists and obstetricians, was "shocked" by "false figures" spread by Shiappa. The Secretary of State had claimed that 75 per cent of all births in France were terminated, and described this as a form of medical "violence against women."
Hematologist Buzyn was not affiliated with her appointment to the government of President Emmanuel Macron. Since then she also belongs to the movement REM. Buzyn had already been a staunch defender of Loi Veil, the French abortion law named after Simone Veil (1927-2017). Those who are not pro-abortion advocates would have no chance to become health ministers in a French left-wing government. Acting President Macron has been a member of the Socialist Party until 2016 and was Minister of Economic Affairs under President Hollande. Agnes Buzyn, a Jew like Simone Veil, was first married to Pierre-François Veil, a son of Simone Veil.
In their statement, Buzyn and Schiappa reviled Bertrand de Rochambeau:

"We must not allow any attack on women's rights to free access to the intended termination of pregnancy, no matter which side it comes from."

Similar statements were made by senior government representatives of the medical association and feminist organizations. The statements of de Rochambeau were called "scandalous and intolerable". They are a "stain on the entire profession".
Syngof made it clear that de Rochambeau did not speak in his role as chair of the advocacy group, but stressed at the same time that "the right to freedom of conscience is not up for discussion".
Text: Giuseppe Nardi
Image:
Trans: Tancred vekron99@hotmail.com
AMDG
Posted by Tancred at 5:04 PM

How these satanic abortionists like depersonalized and misleading terminology. Termination of pregnancy, they say. But pregnancy = child's life in the womb. They move focus entirely from that. They are fooling only those who want to be fooled.

1984 by George Orwell is the prime example of how ideologues change language in order to change people's views. "Termination of pregnancy" is much more sanitized than "murder (never mind the fact that it IS murder and the woman is hurt for life). Sarcasm

There's still at least one gynaecologist left in France who remembers the Hippocratic Oath - 'I will use treatment to help the sick…but never with a view to injury and wrongdoing. I will not give to a woman a pessary to cause abortion.' But the worshippers of Moloch froth at the mouth and call his position 'scandalous and intolerable' and a 'stain on the entire profession.' I wonder if any member of the Church hierarchy in France said anything about this?


as a man who lost his own job in 1980 and 300 thousand euro savings in the long run because he opposed abortion at the job site,

that is formal cooparation in the act of child killing
I would never ever do that, rather lose my job as a dr than even referring
it is like saying, in the nazi times, no, I will not kill this jew, but you can have him killed elsewhere,
formal cooperation is complicity in the highest degree
God's judgment of the traitors will be very severe

it is much better NOT to be a doctor,even lose your license,than to lose your soul

an alternative, these doctors can always emigrate and work in a still prolife african country, but NEVER cooparate in the NAZI regimes of today

and the FRENCH CHURCH as USUAL even applauded the death of the evil witch Simone Veil in 2017 as "a great lady" ,she the political author of the french abortion law


in fact this dr did perform abortions at the hospital until he finally realised, what am I doing

and the fact that he is willing to be president of a pro abortion gynecologist organisation is not logical at all
I did better, I saved one life in 1980, but the company where I worked sacked me because I opposed an abortion,the company wanted to force the employee to abort her child to save money
even then this was illegal,of course the girl did not want the abortion but she was pressured by family on the board of the firm
but the child lived,they got rid of me, accusing me of theft !!!! of all things, theft me a christian man who knows that is a serious sin

no, I am no longer a catholic, I am NOT such a hypocrite,catholics believe NOTHING
they are as evil as the atheists themselves,sorry to say that,I am 66 and I have enough of all those hypocrites that I met so far,


Self-identifying as a Christian is no guarantee against one also being a thief or even being guilty of hypocrisy. The Church is a hospital for sinners.