Youth Crash in the Churches of Rome for Youth Meeting 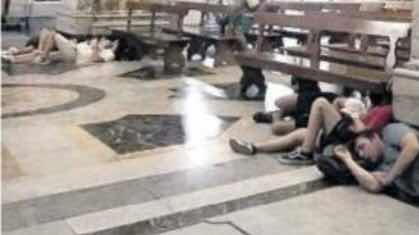 Sleeping in the Church of Saint Louis, King of the Franks
Rome) At the weekend a big meeting of youth took place in Rome  with Pope Francis.
For two days, Saturday and Sunday, 50,000 young Catholics from all over Italy came to Rome last weekend. 195 out of 226 dioceses participated in this event in preparation for the Youth Synod, which will take place in the Vatican in October. The meeting was organized by the Italian Episcopal Conference. 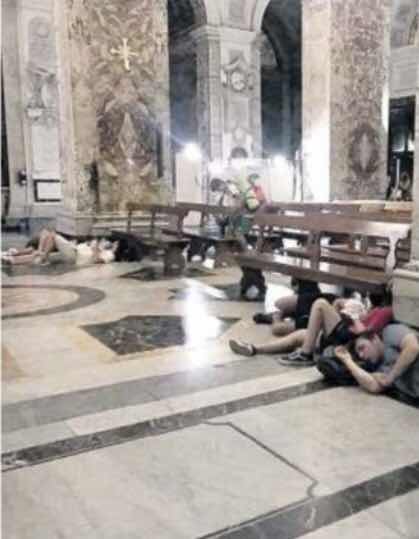 Church of St. Louis of the Franks in the city
On Saturday, a vigil took place in Circus Maximus. Most of the "Papaboys" spent the night in Rome. Many attended Sunday Angelus, where - despite the great heat - 90,000 people were counted. At the end of the two days, Pope Francis gave the young people the "missionary task and blessing of the gifts" that will bring them to Panama for World Youth Day 2019. It is a replica of the Cross of San Damiano and the image of Our Lady of Loreto.
Not everyone had obviously made the night for Sunday. Several churches remained open overnight for "moments of spirituality, culture, entertainment and animation," according to the Roman daily Il Messaggero.
Since some people without accommodation, some young people, also stayed in churches, for example in the French national church of San Luigi dei Francesi. Sancti Ludovici Francorum de Urbe is the titular church of the Archbishop Cardinals of Paris. Not all Romans were enthusiastic about it. There are so many religious settlements in Rome where it would have been possible to sleep or sleep on the floor.
In the Latin name of the church, the ethnic emphasis of the old king's title remained as King of the Franks, after to Louis IX. this title was replaced for one with a territorial emphasis on the dominion as King of France. The colloquially customary translation into German as the Church of St. Louis the French therefore relates less to the saint, but above all to the fact that it is the French national church. Connected to the church was not only the accommodation of the priests who looked after them, but also the former French hospice in Rome, where pilgrims and travelers from France were cared for. The current cardinal priest is André Vingt-Trois, Archbishop of Paris from 2007 to December 2017.
Saint Louis IX. died in 1270 during the Seventh Crusade during the siege of Tunis of dissentary. His last words were: "We will advance to Jerusalem." The words are authenticated and therefore no legend, as it says in the German Wikipedia entry on the king. On the death bed, the king was in the first rank of the heavenly Jerusalem.
The consecrated church in Rome was under construction between 1518 and 1589 between Piazza Navona and the Pantheon.
St. Louis IX,
Text: Giuseppe Nardi
Picture: MiL
Trans: Tancred vekron99@hotmail.com
AMDG
Posted by Tancred at 5:04 AM

"If you build it. They will come." Field of Dreams