Edit: someone pointed out to me that FatherZ noticed some changes in the Catechism. Not only are the works of a Freemason interviewing the Holy Farher available, but subtle attacks on the morality of Church teaching as well! H/t to Alberto Cassaleto who informed us of this change on Twitter which has banned us:
Before: 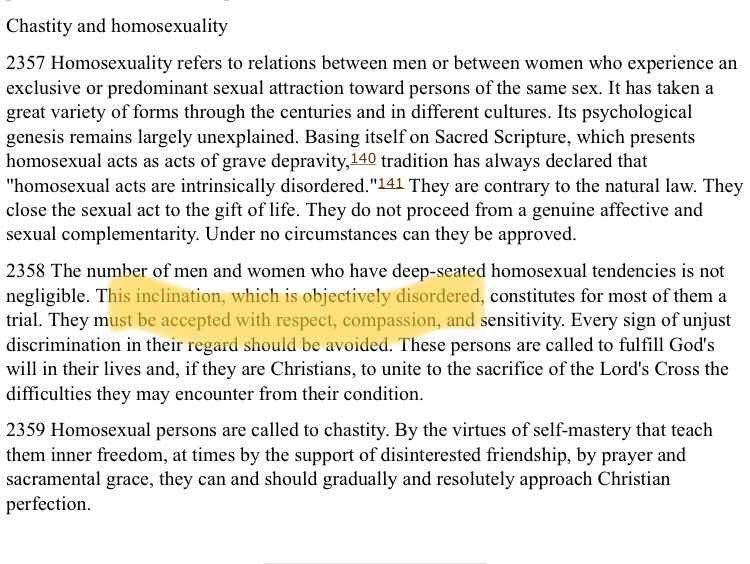 After, the evil version with its omission: 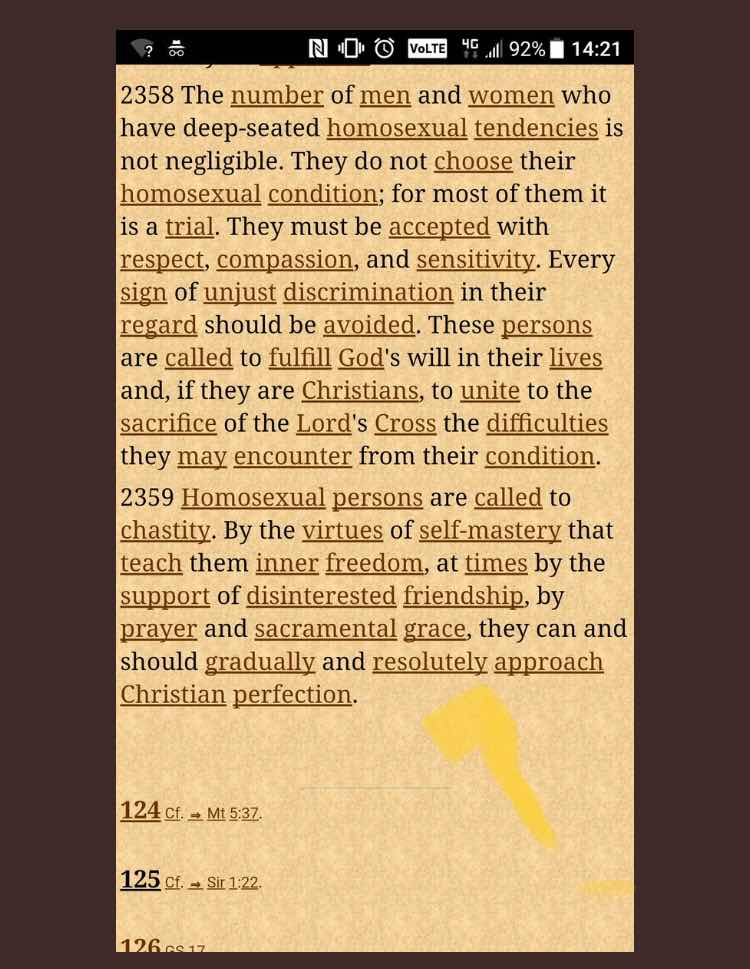 The redefining of morality to be sure.

I suspect these changes will continue to be thrown at us, perhaps so fast that we won't even be able to keep up. And that deflects from the world wide scandal of the homosexual infiltration and crimes. All in the false church.

Same sex attraction is treatable, it is not a genetic/incurable disease. Whole homoheresy rests on the myth of 'born that way, nothing I can do about it'. That assertion "they do not choose..." seems to me like a nice little trick implying that homosexualiy is genetic, incurable.

What difference does it make what they teach? Y'all will keep going there regardless--same way your parents did before you.

Per somesome comments on Fr. Z's page, as well as his original pist, the differences in the CCC online reflect older changes that James Martin already pointed out in the 1998 edition.

There is a change here. It accomodates homosexuality. Still, assuming we concede the issue of homosexuality being inborn, nevertheless,persons can be born with health defects. But no unretarded parent or church should be proud of the defect. And a cure should be sought, regardless. Moreover, discrimination is acceptable so that no normal person, especially a child would be warped. Homosexuals still could and should be not hired based on improper parenting, teaching, training and role modelling.

Anonymous, and you became a Baptist because your parents were Hindus? A 2000 year old institution doesn't dry up if it's members just find a new church. It's not like Protestantism in that way. We prefer to fight back and reclaim our church and faith.

Ihe deliberate omission of the phrase which annoys the queerthinkers - objectively disordered - does not trouble me. That term is very precise, and accurate in its application by the Catechism and the CDF hitherto. It has been deliberately twisted and misapplied by the homosexual lobby to the person, whether bravely battling the temptation or performing the sin.
But this revision calmly inserts the lie that they do not choose their homosexual condition. The assertion that homosexuality is not chosen, implies it is an inborn condition. Unlike sex and gender, presumably, which one can now legally change at will. This is a diabolical inversion of the truth being vigorously promoted by the homosexual lobby to the public through the MSM, and government controlled educational programs for pre-pubescent children. We are told that grooming is the first stage to sex abuse but it is practised by teachers in schools in obedience to the curriculum. Now we see that this kind of child abuse is not only covered up by the bishops, it is here promoted by the Pope and the CDF.

I agree that same-sex attraction is treatable, but it's not an easy thing to do, and not for the reasons you might think. As someone who suffers from SSA I can tell you that I definitely did not choose to have those feelings (just as people do not choose to be schizophrenic, bipolar, or have PTSD), and have spent years resisting them and praying for God to deliver me from them. And it has taken me over a decade of thinking, meditation, and praying about it to realize why I have those feelings and to work on overcoming them, which I an still doing. This probably could have been done in a year or two if I had had some assistance. I didn't/don't have thousands of dollars to spend on professional counselors. I did go to a Christian counselor years ago who's whole angle on it was to help me accept those feelings and integrate them into who I am. I didn't go back to him. I have tried numerous times to find a priest and confessor to help me. But I have only found the "You're going to Hell because you're an abomination" type on the conservative side, who's whole attitude implies that it's not something I can change and should just expect Hellfire regardless. While on the liberal side I have found priests who say "God made you that way so accept it", which I don't accept. So, yes, SSA is treatable, if you can find someone to help you, which priests on neither side seem willing to do in my experience. I just want a priest who will except me, as a child of God, but not my sins, and it shouldn't be so hard to find that. If you can't find help, expect a long, difficult, and painful path to travel alone (except for God and our Blessed Mother) towards healing, which probably explains why so many just give up and give into their feelings, which I can tell you is really hard not to do at times. Just my two cents worth. Please pray for me.

I remember reading the edition before 1998, “they do not choose...”

Anon at 5:09
Thank you for you honesty. Your attitude is exemplary. God helps all of us with his grace, enabling us to fullfill his commandments. But we must fight! May He be merciful to you, and all of us.

I don’t know of any “conservative” priests who are going to tell you that.

Next, we'll be seeing Pope Francis and the Vatican openly approving of gay partners and gay sex. I have not heard one word of condemnation coming from the Vatican about what McCarrick did, his lifestyle, his (and other priests) voracious sexual appetites for young men (laymen, boys,seminarians or other priests).

Now we have a growing scandal in Argentina, of mothers coming forward saying that their sons were sexually abused and harassed by priests in the Archdiocese of Buenos Aires under Bergoglio(Pope Francis), and he either ignored it, or shuffled the offending priests around to different assignments.
Hope this scandal grows into something the Vatican can't lie about , deny or cover up.
Damian Malliapalli

Any attraction is subject to "adjustment". Nevertheless, I do not believe their is an absolute about coming by it/attraction from simple genetics or learning it or other, possible, environmental issues during gestation and after birth and their interplay with genetics and learning.

Those who are "convinced" of their preference, in my mind, have lost sight of objectivity. But, I might be incorrect.

Anyway, as an abandoned heterosexual male spouse, who has defended our marriage twice before Tribunals set up at my abandoner's/wife's request and prevailed in the defense of our marriage both times, decades apart, I understand the circumstances you face, but from my perspective.

I don't really speak to priests about anything because I find them to be a waste of time, except for a few. I live a celibate life, by choice. But, a day goes by rarely, when, one way or another, I am NOT dealing with attraction.

The one time, early on, when I would likely have fallen to temptation, the door was, unexpectedly shut. This, I attributed to God because it was out of the blue.

Since then I have walked the straight and narrow(no PUN intended, although I have a wild sense of humor that I learned from my mother) and only seriously been tempted one other time, when, again THANKS TO GOD, the lady who "caught my attention very strongly", turned out to be a staunch traditional Catholic woman who maintained her virginity and who upon learning of my circumstances made it CLEAR TO ME that she was very attracted to me and WERE I AVAILABLE, she would want a relationship with me. But, since I WAS NOT AVAILABLE that "we" could not be.

God bless her. She made it so very much easier for me.

Brother, Anon at 5:09. All I can say is to "keep on keepin' on", in your lonely walk. Know, however, that others are not very much unlike you. From a diferent view, perhaps, but in very like circumstances, to a large degree, and we, too are "keepin' on".

It is funny because some folks who have heard my story openly wonder why I do not become a priest? My answer is that I would never obey a superior who is wrong, period. They would have to accept my judgment and defer to me. Since that ain't gonna happen, I would never waste my time considering the priesthood. I would be an interesting priest, both married and celibate, as well as conservative/traditional leaning.

And, yes, in spite of my wife's longstanding, unrepentant open, public adultery(which by the way has been supported by the Catholic clergy), I would work to heal our brokenness, if she repented, sincerely.

Priests on either extreme are giving you wrong advice/impressions. They are manifesting their stupidity; it is not ignorance. They know WELL their agendas.

Perhaps the best place to look for understanding is among abandoned, yet faithful Catholic spouses. We walk the same walk as you. Many are deeply wounded, so you might find them/us capable of listening and wrapping their heads around your walk.

God be with you and bless you, Anon at 5:09, I will try to remember you in my prayers. Glad to have read your two cents worth.

I will certainly pray for you. May Our Blessed Mother keep you under her protective mantle and lead you to Her Son.

Where did he find this? I didn't see it on the Vatican Website, so???

That's the point.
The catechism changes are a done deal.
It's hidden, ready to be unhidden at a time suitable to the diabolical disorientation .
Enter the URL directly into your browser.