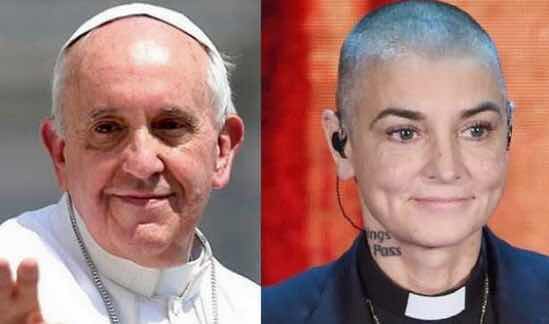 (Dublin) Irish singer Sinead O'Connor became known not only for her music and hairstyle, but also for her hostility to the Church. Now she seeks to be provocative again and wishes to be personally confirmed by Pope Francis, that she was expelled from the Church.
Pope Francis is known for surprises. Recently, he appeared without an invitation and without announcement at a wedding to personally bless the surprised bridal couple. Some media speculate, therefore, that in the course of his visit to Ireland, he might also fulfill the wish of singer Sinead O'Connor and confirm her "handwritten", her claim, her exclusion from the church. The musician wants to have a "proof" for her excommunication.
Sinead O'Connor, who has recently called herself Magda Davitt to "free herself from her parents' curse," was excommunicated by the Catholic Church in 2013. In 1992, she had torn a photo of Pope John Paul II in a television program in front of cameras, horrifying not only in Ireland, but believing Catholics worldwide.
She has repeatedly demanded confirmation from the Vatican for her excommunication to show her to her grandson. In 2015, the mother of four children from four different men first became a grandmother. She has learned from the media, O'Connor said, she is to be excommunicated, but has not received any confirmation to date.
O'Connor has repeatedly advocated the killing of unborn children and criticized the Church for not allowing women's priesthood. When the Magdalen Home scandal broke out in the 90s, the singer also spoke up. At the age of 16, she had to go to a boarding school for a few months. During this time she was "sexually abused by priests". If so, it might explain some of her hatred of the Church. To date, however, it is not clear what and how much of O'Connor's story is true.
The written confirmation of her excommunication, the singer said, should help her to work with rapper Kanye West.
Michael Cox 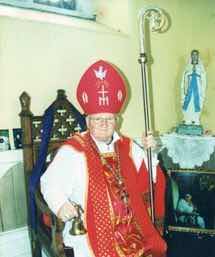 Michael Cox, from whom O'Connor was dubbed a "priestess" in 1999.
In 1999 Sinead O'Connor alias Magda Davitt was consecrated by a "bishop" Michael Cox to be a “Catholic priestess". Cox, a former police officer, after being excommunicated by the Catholic Church in 1978, founded the Irish Orthodox Catholic and Apostolic Church, of which he is Archbishop Patriarch. O'Connor received the name "Mother Bernadette Mary" at her "consecration".
In 2012, rumors about psychological problems and a suicide attempt by the singer surfaced in the media. There was talk of it in music circles earlier. In 2015, O'Connor, who ten years ago studied theology for a while, uses strong religious references in her songs, but attacks the Church.
In a few days Pope Francis will visit Ireland at the conclusion of the World Family Meeting.
Text: Giuseppe Nardi
Image: Wikicommons / ordermaterdei (screenshot)
Trans: Tancred vekron99@hotmail.com
AMDG
Posted by Tancred at 9:24 AM

Sinead is sly and deceitful and there is method to her madness. Pope Francis is very liberal with the gay community. Who knows what he will say to Ms. O'Connor who is obviously conflicted. ---There is no doubt of her lesbian bent and wish to be a priest. Her suicidal tendencies are very unfortunate. Where is the compassion for this conflicted woman? There are only words of acceptance for the gay lifestyle as an alternative way of living. ---- God created men and women with different psyches. Of course women including my sainted Irish mother were discriminated against. Nevertheless, let's come up with a solution to fulfill the roles of both sexes. They are not the same and the rush to secretly put in place a path to the priesthood is not the answer.

Poor Sinéad. She's so desperate that she's asked for clarification on a religious matter from Pope Francis.

Maybe when Francis officially confirms her excommunication, he can include himself too. You know, a two-fer.

Wait. She needs an excommunication so she can work with Kanye? Is that what the illuminaughty is requiring? Would he even know how to pronounce it?

The audience booed her and she ran out in tears. Most of the audience were Wall Street Catholics probably their finest moment and gave NYC a life extension of 30 years more (joke).

Hey Bishop "Mike Cox" (have you seen MikeCox?) looks Traditional as any Rad-Trad with his fiddleback and pontificals.

Would you prefer the faggot-pedophile Pauline rite (of sodomy)?