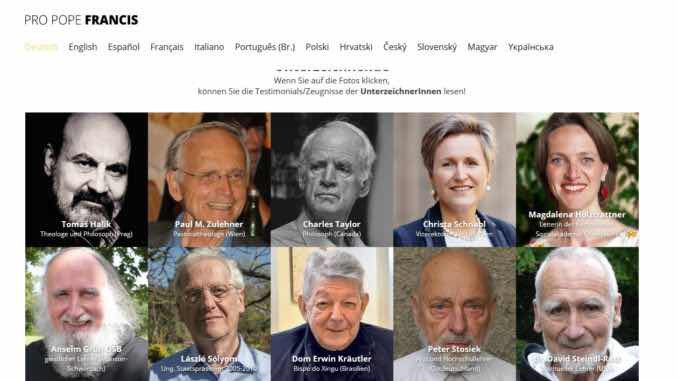 Markus Büning, lawyer and theologian, but also a victim of sexual abuse by a priest, protests against the too vague letter from Pope Francis to the abuse scandal. Büning has also distanced himself from the action Pro Pope Francis, to whose first signatories he belonged a year ago.
(Berlin) Yesterday Pope Francis published a letter to the People of God. On the same day, the German theologian, lawyer and journalist, Markus Büning, responded by withdrawing his support signature for the Pro Pope Francis initiative of 2017, in protest. Büning himself belongs to those who are victims of sexual abuse by clerics. As a child he had been abused by a priest.
Büning's victim status was officially recognized by the Church. The competent diocese apologized to him and made a symbolic compensation.
This personal concern leaves the lawyer, who also holds a degree in theology, an aptitude for the question of how Pope Francis, as head of the church, deals with the issue of child abuse by clerics and the handling of this abuse by the ecclesiastical hierarchy.
Büning's juridically and theologically trained sensibility was disappointed by the letter of Pope Francis. He had expected more. Instead, the Pope remained too vague and unspecific for Büning despite the large number of cases, including some with which he had been personally involved in the past 12 months. Büning writes:

"This text is absolutely inadequate and a great disappointment".

Indignation prompted the lawyer to ask Pope Francis to repent instead of removing the bishops who were guilty.
Büning had reproached worried Catholic intellectuals a year ago when they issued Correctio Filialis, a clear criticism of the administration of Pope Francis. They accused him of tolerating, if not promoting, the spread of heresies in the Church, especially with the controversial post-Synodal letter Amoris laetitia  The lawyer and theologian was of the opinion that the nature and tone of the criticism went too far and would not correspond to the duty of obedience and allegiance to the reigning pope. For this reason, he was one of the initial signatories of the counter-initiative Pro Pope Francis, which was launched by the Viennese pastoral theologian Paul Zulehner to respond to the Correctio filialis. In addition to the names of Paul Zulehner, Alt-Bishop Erwin Kräutler, Völker Beck [Green Party’s Meth user and Pedophile Apologist], Thomas Sternberg, Leonardo Boff, Alder Abbot Martin Werlen, Alt-Bishop Fritz Lobinger and P. Anselm Grün was also that of Markus Büning. Meanwhile, his name has been deleted.
After yesterday's letter from Pope Francis, Büning told Zulehner to cancel his name from the Pro-Pope Francis list. The German theologian and lawyer also sharply criticized Pope Francis. Maike Hickson quotes him on LifeSiteNews as saying:

"Meanwhile, it is clear that Pope Francis, apart from many words, does not assume his responsibilities. I can only pity such a pope. "

He shared his protest not only with the initiator of the Pro Pope Francis initiative, but also with the Apostolic Nuncio in Germany and a number of leading church representatives, including Cardinal Woelki and Cardinal Burke.
So far it has been only US Cardinal Raymond Burke, who has, by the way, already been demoted twice by Pope Francis, to the recent abuse scandal in the United States in a way that would be expected of a pope.
The Cardinal told EWTN in an interview on 16 August that the abuse scandal "hits the heart of the Church":

"We are dealing with the most serious sins here. For the bishop, who has failed in this area painfully, the penal means of the Church are also means of expiation for his well-being ".

"That a bishop exploits the flock and commits deadly sins: that is simply unacceptable and must stop."

A single bright lay person among the overwhelming darkness of our pastoral pastors, so pastoral that they won't hear, see and speak of evil perpetrated by themselves. Let us REPENT!!! oh little children and post-pubescent boys and clerics for seducing them.

Very interesting. The German Heirarchy has been very, very quiet since the storm broke out in USA. The German Bishops have followed the lead of the US Bishops but in more abrupt way until now.

The American Bishops are more subtle whereas the German Bishops have been outspoken in support of Women Priests,Married Priests,Homo. marriage, etc... suddenly they have been ever so quiet.

Point in Fact, they are worried is the only conclusion to draw. This inference is that they must be involved in the Abuse Scandal to some degree. Can you imagine, Kasper, Marx and the gang under duress?

We are judged by God on an individual basis. Those involved in the sex abuse crisis as perpetrators are guilty of sin. They deserve divine punishment which may wait until their death and a walk in front of the eternal judge. To put the blame on clericalism and remove individual responsibility is simply something out of fairy tale.

Slowly but surely, Pope Francis is on his way out!!

(I read from a reliable site that Francis' Ireland trip will be an embarrassment....not only by what Francis says/does, but by a low turnout despite the sale of tickets. Apparently thousands were bought up, with the people having no intention of going to the events.

I would prefer "Tar and Feather time".

Let us pray unceasingly for the purification of the church + the resolution of this abdominal crisis in accordance with God's holy will. If we all continue to say the rosary and offer our masses for this intention we will see the desired results. God is faithful and the gates of hell will not prevail against his one true church no matter how ferociously attacked or sorely tried it may be.
The end result will be the spotless bride of Christ without stain or wrinkle. Have faith! Be a prayer warrior! Be courageous! Continue to call on the Holy Name of Jesus + entrust it all to His Immaculate Mother. Ave Maria!