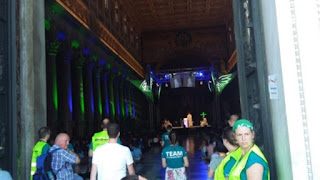 (Rome) What's wrong with the church? This question is asked by believers after what happened on Tuesday during the pilgrimage of German altar servicers (minis or Ministranten) in the Patriarchal Basilica of Saint Paul outside the walls.

Altar servers from different countries were recently in Rome for the 12th International Altar Server Pilgrimage. It is the largest of its kind to date. 50,000 ministrants have come to the Eternal City from the Federal Republic of Germany alone, and another 4,000 from Austria. 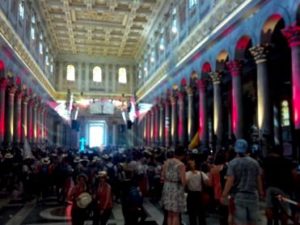 The actual altar server pilgrimage lasted fom the 30th of July to the 3rd of August.

On July 31, an incident occurred that caused astonishment, anger and disappointment among Roman believers.

Officially, on the morning in the papal basilica of San Paolo Fuori le Mura (Saint Paul Outside the Walls) a Mass for "German Ministrants" should be celebrated. This much did the astonished Romans understand. The basilica is one of the most ancient churches in Christendom. In it, just below the altar, is the tomb of the Apostle Paul. Here he suffered martyrdom and was buried after his execution more than 1950 years ago. At the altar above his grave, only the pope and the sacred bearer delegated by him may celebrate Mass.

Eyewitnesses reported that the organizers, i.e. the German pilgrims in charge of the pilgrimage, staged a spectacle in the church that was reminiscent not of the sacred liturgy but of profanation. 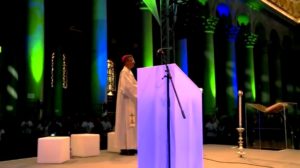 Indignant witnesses spoke of an "unbelievable, even apocalyptic scene," says Corrispondenza Romana. The church was immersed in a sea of ​​lights that corresponded to a disco or a psychedelic spectacle. "What happened is suitable for a rock concert, but is not suitable for a holy place," said the news site. Choir, keyboard instruments and drums were positioned right next to Saint Paul's grave. The apse and the ciborium of Arnolfo di Cambio was completely hidden.

The columns, ceilings and walls of the basilica, which display magnificent works of art, mosaics, frescoes, stone carvings and woodwork, were dipped in neon-colored headlamps such as were used by the Psychedelic Trance Festival O.Z.O.R.A.. Large screens, stages and a multitude of loudspeakers were set up throughout the basilica, which were sounded at full volume.

In its origin, the basilica was built by Emperor Constantine the Great and consecrated in 324. Under Emperor Theodosius in 391 it was extended in its present dimensions. On July 31, 2018, it was transformed into a gigantic disco for the German ministrants.

The organizers stated that around 9,000 German ministrants were present at the spectacle. Had the majority of the ministrants from the German-speaking world spared the "event"? The ministries of each diocese come only on different days and at different times to St. Paul Outside the Gates.

Believers were also irritated that the organizers appointed by the diocese, including a German priest, with incredible vehemence denied all other, tourists, tour guides, ordinary believers, even the parishioners, access to the basilica. What did they have to hide? Should not their desecration of the venerable basilica be seen? 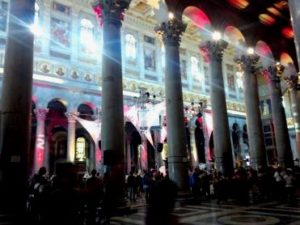 The vehemence was justified by the remark, that they had paid 18,000 euros for the use of the structure, which probably meant no rent for the church, but the cost of the stage, light and audio technology. Anyway, according to Corrispondenza Romana, "the cost of exclusive use of the basilica" was claimed.

The Catholic news service reported that Vatican security forces had to intervene to make it clear to the organizers that a "privatization" of the church was ruled out, no matter how much money was spent on the choreography.

The "show" was to be continued until Saturday. "Unless someone from a higher place intervenes," said Corrispondenza Romana. Believers complained that already last Sunday, they started with audio samples at the highest volume. These songs were played in the perfect rave party style.

Corrispondenza Romana commented on the incident by saying:

"It has long been known that Germans humble and humiliate the sacred liturgy by disfiguring its nature. That they now claim to do this in the house of others is really unacceptable. It is still to be revealed who has authorized such use of the basilica and under what conditions, and what action is now to be taken in the face of the grave, serious and shameful battlefield. "

So who is responsible for the spectacle in the basilica? 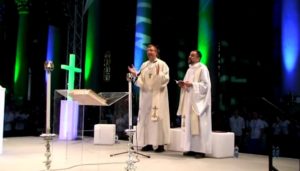 Organizers of the Rome pilgrimage are the diocesan posts for youth ministry. Each diocese set up its own website for the ministranten pilgrimage. There you will find something.

According to this, the ministrants of the various diocese were brought to the Psychedelic Trance Festival on different days and at different times. The ministers of the Archdiocese of Munich and Freising, led by Cardinal Reinhard Marx, the President of the German Bishops' Conference, is still fronting the spectacle. For them St. Paul Before of the Walls was on Saturday, August 2 from  5 pm  on the program. The keyword is meaningfully "Animazione" including "Diocesan final service with Cardinal Reinhard Marx" from 6:30p.

On the morning of July 31, it was the turn of the ministers of the Archdiocese of Freiburg. You have, so the official website,

"With a joint service in the Basilica of St. Paul Outside the Walls, the Freiburg program of the International Ministrant Pilgrimage opened. The Freiburg Auxiliary Bishop Michael Gerber welcomed the boys and girls from 250 parish and pastoral units. The motto of the pilgrimage is "Seek the peace and hunt for it."

The faces and posture of many adolescents were embarrassed during the spectacle. They are not to be reproached. They were forced to participate. So much is certain: The show was not their invention. It was given to them from above, because the Church leaders and their full-time apparati are obviously convinced that they have to be "cool" for adolescents to bring them to church.

Noted on the Margins

In the Archdiocese of Freiburg, a logo was designed for the pilgrimage, in which two at least questionable or misleading symbols can be seen.

Ministrantenwallfahrt Rome 2018: Logo of the Archdiocese of Freiburg with death rune and SED handshake emblem.
This is the death rune used by the so-called "peace movement". It was already featured in antiquity as an upside-down cross, and therefore seen as an anti-Christian symbol. At that time it became known as Nero Cross. The Muslims who invaded Europe via Spain in 711 used it out of contempt for Christians. It was also used in the fight against the crusaders by the Muslims in the Middle East. In 1958, the Communist Bertrand Russel sought a symbol for the "peace march" initiated by left-wing groups against NATO. Russell, known for his radical rejection of Christianity, opted for the Death Rune or Nero Cross, though not without ulterior motive.

But why should Catholics need to have a reverse cross?

The second symbol is the handshake, also known as Fraternizing Hands, which has been a symbol of Freemasonry since the 18th century. Since 1848 it also belongs to the socialist symbol canon, first used in 1848 by the General German Workers' Brotherhood, which at that time worked closely with the Communist League. In 1946 it became the emblem of the Socialist Unity Party of Germany (SED). As late as 1998, the CDU placarded the SED handshake symbol in the Bundestag election campaign with the message "Watch Out Germany!"

Attention should also be paid to those responsible to the church, which through misunderstanding or even anti-Christian symbolism exposes them to young Catholics. 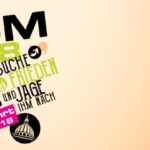 Ministrantenwallfahrt Rome 2018: Logo of the Archdiocese of Freiburg with death rune and SED handshake emblem. 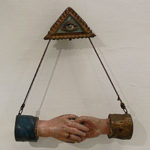 Confraternity hands, symbol of the Freemasons, Austria around 1800 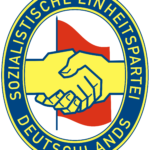 Fraternity hands, part of the Socialist Symbol Canon since 1848 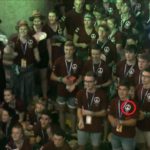 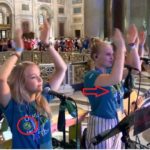 Scum, absolute scum. I don't know any other way to describe these creatures.

Don't be so coy. Delate them to the CDf. They'll take care of these fellows for sure.

Good description for Pope Francis, who behind the scenes probably knew and approved. This is one of his patriarchal Churches. Is anyone naïve enough to think he didn't know? Or the Cardinal who is in charge of St.Paul's? Of course they knew.
In the minds of the Romans who were outraged, and justifiably so, they dislike this Pope all the more for it.
Pope Francis and his people are hated in Rome. I saw an example of I when I was in Italy this winter, on the last leg of my tour of Europe and others places for my job. It was Ash Wednesday. I got up and walked the route from San Anselmo to Santa Sabina, the penitential route the Pope traditionally walks. I expected to be among thousands lining the route, like there always was before. I saw films of it, and the route was packed. This Ash Wednesday? I was alone, practically the whole route. At most, there were a dozen and a half people standing to greet the Pope as he walked along. I saw Francis and his procession coming down the path from San Anselmo. The route, which had been choked with Romans and pilgrims for the Pope in years past (for Benedict, John Paul II, Paul VI, John XXIII, Pius XII) was 95% empty. Finally I said to myself "why bother?", and walked back to my hotel suite. On the way back, no one was lining the route for the Pope.....no one.
The Romans know who was behind this.....the probably gay organizers of this sacreledge, the same type in the Vatican, and Francis himself...although it probably will be denied by the Vatican.
"We didn't know", they will innocently gasp.
Yeah, right. And you didn't know that McCarrick was a pedophile pervert either.

Do we have hi-res images available?

"And I heard, and understood not. And I said: O my lord, what shall be after these things?

And he said: Go, Daniel, because the words are shut up, and sealed until the appointed time.

And from the time when the continual sacrifice shall be taken away, and the abomination unto desolation shall be set up, there shall be a thousand two hundred ninety days,

Blessed is he that waiteth and cometh unto a thousand three hundred thirty-five days."

It is all about reaching out to youth and burying the "faith of ages" because it is too boring.

Have you looked at the katholisches original?

What an insult to Almighty God, to St. Paul and all he suffered for Christ. This is further sinking into the abyss led by the German hierarchy. They are not even Lutheran....they are Marxist in name and nature and hell bent on destroying the Church from the youth upwards. What can we do Lord? Obviously the current occupant of the Chair of St. Peter is a hater of what Jesus Christ established. There is no other way to categorize him. Pure evil reigns in Rome being led by Bergoglio. I never liked the smell of Lanolin and he is steeped in it - in his sheepishness. Lord God send us a Knight to save your Church, be he American, African or German, and remove the remnant of the Communist Infiltration. (Read "AA-1025" revealed by Marie Carre Tan Books).

Read the Book of Revelation chapter 13 - the friendship of the false prophet and the antichrist.