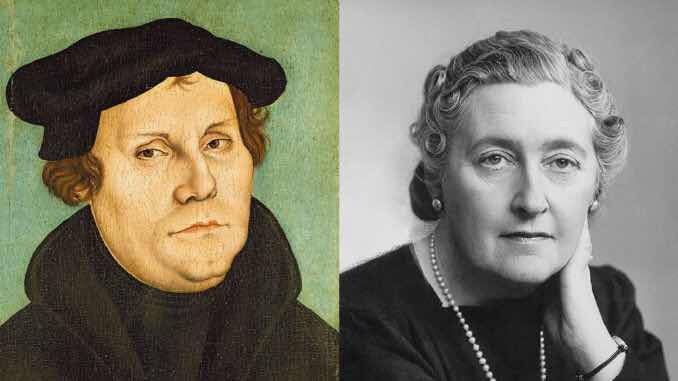 Martin Luther and Agatha Christie
(London) Luther had no mercy on the Holy Mass. He tore it up. He had no more mercy on the papacy. He sank it. It was precisely by breaking up the liturgical rite that the heresiarch from Eisleben led his merciless war against the Church. A drama from which only the Council of Trent and St. Pius V, who extended the Roman Rite to the entire Latin Church, showed a way to rebuild the Church, while the Pope retained the possibility of using other existing rites as well if they were at least 200 years old and therefore safe from Protestant infiltration.
Gianfranco Amato showed in his book, The Indult by Agatha Christie, how the Tridentine Mass was saved in England.1) Step by step, as it became possible, despite the post-conciliar liturgical reform of 1969, to retain the never-abolished Vetus Ordo in England.
On the British island, the Mass of St. Pius V was never extinguished thanks to the Indult of October 30, 1971. The Indult was granted by Pope Paul VI. after an Appeal to Preserve the Mass was sent to the Vatican addressed to him, which was published on July 6, 1971 in the Times. The appeal was signed by 57 personalities of English cultural life, including the famous writer Agatha Christie. Thus the appeal and the indult are named after her. Among the signatories were not only well-known Catholics such as Graham Greene, but also ecclesiastics and Anglicans, such as Agatha Christie, who invented famous characters such as Hercule Poirot and Miss Marple, or the bishops Robert Cecil Mortimer and John Richard Humpidge Moorman, the delegation the Anglican Council observer had cited.
The comparison was introduced by the great English intellectuals in this wonderful appeal:

But it is a fact that the basilicas and the cathedrals were built by the Christian peoples to celebrate a rite there that a few months ago was a tradition of universal vitality. It is the Roman Catholic Mass (...) Without considering the religious and spiritual experience of millions of people during 2000 years, this rite has lived and continues to thrive with its splendid Latin texts in a multitude of infinitely precious works. Works, not only of mystics and theologians, but also of poets, philosophers, musicians, painters and sculptors, and of the greatest of all countries and times. It therefore rightly belongs to world culture, not less than the Church and the faithful.

If we triumph over the Mass, I think, then we triumph over all the papacy. For at the Mass, as on a rock, the entire papacy is built with its monasteries, its bishoprics, its quorums, its altars, its priests, its teachings, and leans upon them with its whole body. And all these things must collapse with the sacrilegious and despicable Mass.

In England, the Holy Mass was the starting point for the dismantling of the Catholic Church, as the Blessed John Henry Newman had recognized. The more one engrosses oneself in these suggestive and meticulously documented pages of the book, which are more topical than ever, the more questions arise, especially because of the sad events surrounding the Franciscans of the Immaculate. Why did the Montini pope grant the indult to England? Was it the kind of demand that made the pope mild? Was it perhaps the esteem he cherished for some signers? Or was it the diplomatic skill of Cardinal Heenan, who proved his loyalty and loyalty to the Pope in difficult moments? Perhaps because many of the signatories belonged to the "modern world" with which the Pope wanted to talk so stubbornly? Or did he do it in the name of those 40 martyrs who were murdered in England and Wales for their attachment to the Old Mass, and were canonized by Paul VI. on October 25, 1970?
Text: Cristina Siccardi, Corrispondenza Romana
Translation: Giuseppe Nardi
Pictures: Wikicommons
Trans: Tancred Vekron99@hotmail.com
AMDG
Posted by Tancred at 9:42 PM

The unspoken secret is there for all to see. There is no longer a need to whisper. Cupich, McElroy, Tobin, all have a similar lifestyle. "Birds of a feather". That is the missing link. Pope Francis called it a "gift from God". Is this a "kick in the head"?

Murder on the Orient Express, what a classic. So, Agatha was religious? Didn't know that.

I don’t think she was particularly religious.

Her argument and request, via her signature, was based on historic and literary/prose contexts
...IE: That if the Mass of Ages - in all its organically developed splendor - disappeared then the world would lose part of its patrimony and beauty.

To one who seeks truth and beauty it is evident that the Mass of 10,000 Saints is at least a great creation of human expression even when there is belief of its Divine Origins.

How times have changed..........The Irish bishops’ response to the Act of Supremacy was to send a declaration of their loyalty to the Pope, asking for help to carry on a religious war for the recovery of their cathedrals and churches and for freedom of public worship. This resulted in an expedition of 800 Spanish and Italian troops which arrived in Smerwick Bay in Kerry in 1579. They took over the ancient castle of Dún-an-óir which was put under siege by the Elizabethan soldiers. When the resistance collapsed the foreigners were pitilessly massacred. The three survivors, who included a priest, Fr Lawrence Moore, were handed over to the Lord Deputy Grey. The usual inducements were offered to them if only they would recognise the queen as head of the church. The overtures were rejected and the survivors affirmed repeatedly that they were Catholics and, if necessary, were prepared to die in defence of that faith. Since all efforts to change the minds of the captives failed, they were led off to the forge of an iron-smith where their arms and legs were broken in three different places. The priest, however, was subjected to special treatment. His thumbs and forefingers were cut off because, as his executioner said, they had so often been employed in the consecration of the Eucharist and had touched it. All that night and the following day the three men bore their sufferings with great patience before they were hanged and afterwards cut to pieces on 12 November 1580.

It is the Mass that matters by Fr Thomas McGovern. Well worth a read.