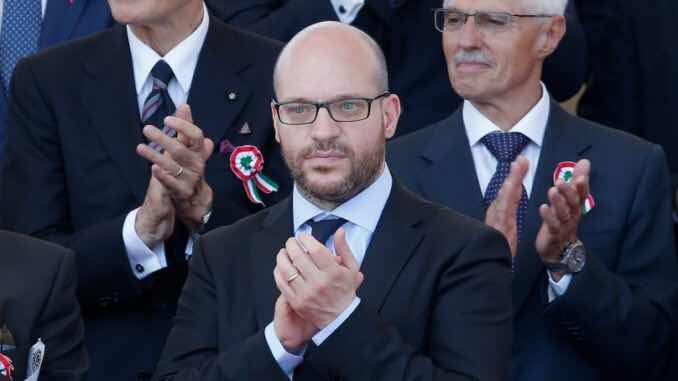 The "Liturgist of the Pope", Andrea Grillo, "takes shots at the new Italian family minister Lorenzo Fontana: The No-Go-Maximum Fontana: He opposes abortion, mass immigration, gay marriage, gender ideology and attends Mass traditional rite.
(Rome) There is a bitter ideological struggle in the Catholic Church. It has been brought into the Church for decades by the side that has appeared in the past under the coat of arms of modernism and progressism. The most recent evidence was provided by the Italian lay theologian Andrea Grillo with a radical attack on Summorum Pontificum and the new Italian Family Minister.
Grillo teaches liturgical sciences at the Pontifical Athenaeum Sant'Anselmo of the Benedictine Order in Rome and is known for his harsh attacks against tradition and everything that stands in the way of actual or supposed "modernization" of the Church. His main enemy for years has been the Motu proprio Summorum Pontificum of Pope Benedict XVI. His repeatedly voiced fears: Bugnini's liturgical revolution under Paul VI. could be reversed. As a matter of fact, Grillo, who of course knows the actual numbers, tries to crush the delicate plant of tradition. The faster, the better, because: "defend the beginning".
Grillo's attack on Cardinal Sarah
A year ago, Grillo insulted Cardinal Robert Sarah, Prefect of the Roman Congregation for Worship and the Sacraments, as "incompetent and inappropriate." In such a rage Grillo addressed the epilogue contributed by Benedict XVI. to Cardinal Sarah’s book, "The Power of Silence.” Grille has nothing to fear from his degrading scolding of Cardinal Sarah. It demanded no courage, but was a health dose. He only followed Pope Francis, who has already humiliated the Cardinal publicly several times. 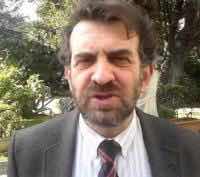 Andrea Grillo
Grillo is a radical proponent of vernacular languages ​​in the liturgy. Among other things, the "decentralization" of the Missal translations, which Pope Francis granted to individual episcopal conferences, goes back to him. Grillo is eagerly involved in new translations, "which are in direct contradiction to Liturgiam Authenticam's instruction from 2001," said Riccardo Cascioli, editor-in-chief of La Nuova Bussola Quotidana.
A harsh wind has been blowing in Rome since the left side of the Church.l now sees its opportunity. Andrea Grillo, neither related nor confused with the comedian Beppe Grillo, whose Five-Star Movement in Italy has just assumed the governmental responsibility, is among those progressives who have radicalized their language under Francis.
Italy's new family minister as a hope
Andrea Grillo's most recent enemy image is the family and disability minister of the new Italian government from the Five Star Movement and Lega. For the political left and Brussels, the new government is a red cape, and the leftist Catholics are no exception.
Lorenzo Fontana, born in 1980, is a deputy federal president of the Lega and has been a Member of the European Parliament since 2008 and deputy mayor of Verona since July 2017. Since the parliamentary elections last March, the member of the Italian Chamber of Deputies, which voted him Vice-President. He graduated from the University of Padua with a degree in political science and history. The latter he concluded with a work on the Christian civilization.
Fontana is a bearer of hope for a Europe worthy of the name. He is a staunch life-support and a defender of the family and his own identity. His rejection of abortion, mass immigration, "gay marriage", adoption rights for homosexuals and gender ideology make him a major enemy of their ongoing struggle for cultural hegemony for the political left. She sees this threatened by a profiled opponent, a rarity in the mentally lax bourgeoisie, whose main focus seems to be on economic liberalism.
Family Minister = "Fascist", Summorum Pontificum = “Fascism”
Of course, the frontal attacks against Fontana that have been launched in recent days are of course applicable to the new government. A look at German media, and what has been written about Fontana over the past 48 hours, is enough to see how campaigns work. Fontana is the red cloth that has been chosen as the main point of attack. The goal: To shoot as fast as possible, a minister from the new government. For now, however, there seems to be little chance of success. 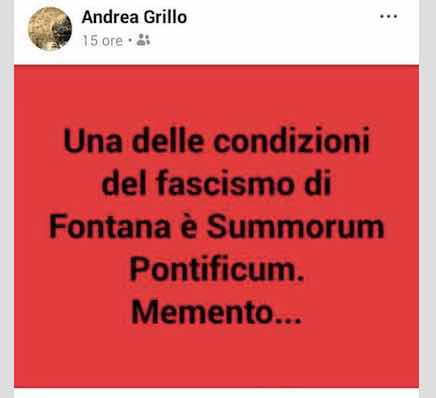 Grillo's first Twitter entry
Not only the organized gay lobby and left-wing parties attack Fontana. The liturgist Andrea Grillo also contributes to this politically motivated attack against the new government. Grillo makes it a no less ideologically motivated attack against the church. In his sights he has - not very original - Summorum Pontificum. Minister Lorenzo Fontana visits the Holy Mass in the traditional form of the Roman Rite. For politically motivated progressives in the church a no-go-maximum.
Therefore, the Catholic theologian Grillo tweeted against the Catholic family minister:

"One of the requirements for Fontana's fascism is Summorum Pontificum. Memento ... "

"The legitimacy that Summorum Pontificum gives to a reactionary drift of politics must be demonstrated. Not just in Italy. " 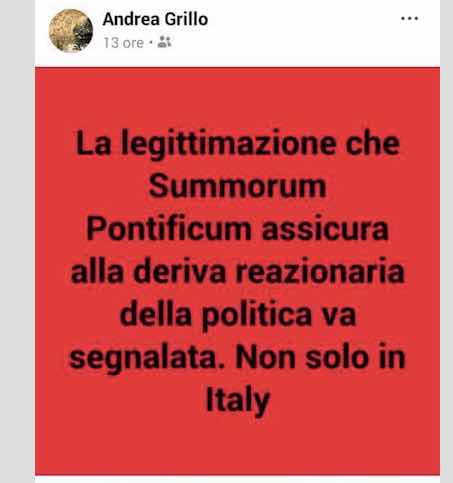 Grillo's second entry
The Motu proprio Summorum Pontificum of Pope Benedict XVI. is denounced as Fascism by a Catholic theologian, Ordinary at a Pontifical College in Rome. This unknowable audacity portrays vividly which forces are currently seeking supremacy in the church or have already gained the upper hand. Such a view can only lead to statements such as those Grillos.
Fontana himself responded to the attacks of those days in a letter to the daily Il Tempo:

"The hatred of the elites does not scare me."

The theologian Andrea Grillo is meant as well. His Twitter posts show how deeply a certain decomposition process was brought into the Church, even if a time-honored monastic order like the Benedictines trained Grillo at their Roman college.

The incident shows, above all, who is well-liked in the current pontificate in Santa Marta. Andrea Grillo was called by Pope Francis in 2016 in the ominous Liturgy Commission, which was established by the head of the church behind the back of the competent Cardinal Prefect Robert Sarah.
Katholisches.info wrote on January 12, 2017:
"The task of this commission is not to correct the degeneration of the post-conciliar liturgical reform of 1969/1970, which is a serious nuisance in the form of liturgical abuse, including in German-speaking countries. The task of this commission is rather the exact opposite, "said Magister. It is meant to demolish one of the last walls of resistance against the abuse of post-conciliar liturgists and would-be liturgists. It refers to the instruction Liturgiam authenticam, which was issued in 2001 and defines the criteria according to which the obligatory Latin liturgical texts are to be translated into the vernacular languages. "
In March 2017, Francisco Fernandez de la Cigoña described Francis’ members of the Liturgy Commission as "altogether alarming".
Text: Giuseppe Nardi
Image: Youtube / CTV / Twitter (Screenshots)
Trans: Tancred vekron99@hotmail.com
AMDG
Posted by Tancred at 4:58 PM

Fontana stands for the Church while Grillo stands for the same anarchy that has taken over the hierarchy under this pontiff from the slums of La Plata. Good for Fontana.

Everything and everyone the wicked left does not agree with is: fascist, nazi, bigoted, racist, "sexist", "homophobic", "islamophobic" (in politics); anti-Francis, divisive, "unmerciful", "against the Council" (in the Church).
May liberalism and modernism be one day totally extinguished.

It's extremely worrisome to the Sanhedrin and their traitorous lackeys in the Vatican. "Stop speaking in that Name! " We hear and obey oh rootless cosmopolitan masters. Disgusting. That we should see the hierarchy of the Church groveling to these rejectors of Christ and attacking other Catholics.

Wow. What a scumbag.

Summorum Pontificum is a joke. It does nothing that Quo PRIMUM doesn't, save for the propping up of the bastard rite.

and the N .O. MASS IS COMMUNIST LIKE ANTI POPE FRANCIS