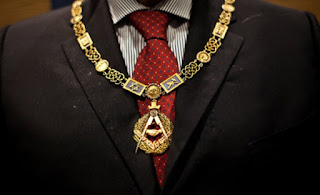 Freemasonry, the mafia and Pope Francis as a prototype of the "enlightened despot" who was supposed to rule the "global society" because democracy was "not suitable".

(Rome) What does a Grand Master of Freemasonry say about Pope Francis? A few days ago, the official website of the Grand Lodge of Italy (GLRI) published some Thoughts by Grandmaster Fabio Venzi. Even more enlightening seem to be words of his predecessor in the office of grandmaster. 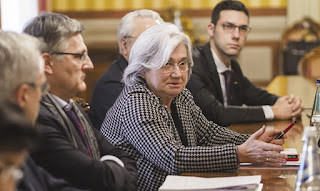 Rosy Bindi as Chairwoman of the Anti-Mafia Committee of Inquiry of the Italian Parliament
The committee, which was in office until the parliamentary elections last March, was chaired by former Christian Democrat politician and Minister of Health, Rosy Bindi.

In the Bindi report, among other things, is the revelation of the infiltration of some Masonic organizations by the mafia. On page 155 there is a brief paragraph on the incompatibility of the Catholic Church and Freemasonry, without giving the reasons for this incompatibility. It wasn’t the allegations of infiltration by the mafia, but this paragraph of eleven lines, that was addressed by Grand Master Vanzi. "This is undoubtedly the most troubling part" of the report (page 2).

In his reply, the Grand Master claims a perfect compatibility between Church and lodge. Freemasonry is not plotting, the anti-masonry critics are absurd and slanderous in their statements (p.2ff) and probably suffer from a "dysphoria of personality" (p.26). 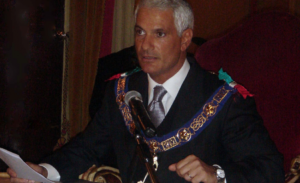 Venzi, a sociologist, tries to confuse the average reader himself in apparent trivialities. So he writes:

"As I have already suggested, we know that hostility to Masonry was born before Freemasonry" (p. 25f).


In his latest book "The Last Heresy" (L'ultima eresia) he says:

"Freemasonry was created in 1717. The first anti-Masonite document dates from 1652."

"The problems of free masonry are problems that arise along with Freemasonry.”

Not "Satanic", just a Luciferian component 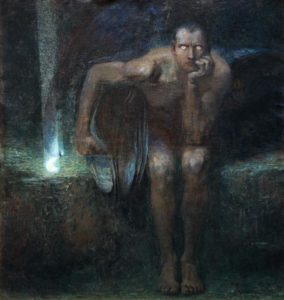 So what !? There is considerable confusion in the statements of the Grand Master. When was the hostility to Freemasonry really born? Even he doesn't seem to be able to believe that it could have existed even before the founding of the Masons. The statements of the Grand Master, however, help to better understand the incompatibility between Church and lodge. In his remarks, the Grand Master clearly shows that Freemasonry is a "mystery school" with an "initiation rite", "one of the many esoteric movements" (p. 4).

The Grand master, however, resolutely defends himself against the assertion of a "'Satanic' component of Freemasonry" (p. 5). On the other hand, he does not reject an initiatory, esoteric, gnostic and Luciferian component. The title page of his already mentioned, most recent book "The Last Heresy" is at least adorned with the picture of the painting "Lucifer" by the German painter Franz von Stuck (1890).

Conspiracy against the church? "Ridiculous…"

Freemasonry has conspired against the Church?

Impossible, ridiculous, absurd, says Grand Master Venzi. He also describes it as "ridiculous" that he is supposed to have "important, clerical allies" and "contacts with high-ranking representatives in the Vatican" (page 3f). In the book "Masonic Vatican. Lodges, money and occult power: The secret side of the Church of Pope Francis" (Vaticano Massone), published by the Vaticanist Giacomo Galeazzi in 2013 with his colleague Ferruccio Pinotti, sounds quite different. The two journalists also spoke with Grand Master Venzi. 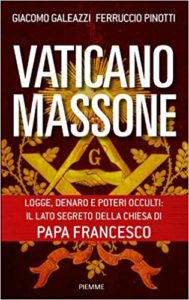 He "revealed to us that in his obedience, the only one recognized by the Grand Lodge of England, there are many priests. Venzi is in a sober and discreet way to begin a dialogue with representatives of the Vatican "(p. 54).

"It is suggested by many that behind the recent and revolutionary events in the Vatican, especially the resignation of Pope Benedict XVI, is the hand of the lodges. In the corridors of the Sacri Palazzi it is whispered that even the election of the new Pope is their work. After a pontificate of closure like that of Ratzinger, it is probable that many among the lodge brothers hope, with the help of the Jesuit Bergoglio, to re-establish the old sympathies between the Society of Jesus and the Freemasons "(see also The Jesuit on the Pope's throne).

Venzi denies in his "Thoughts" that the Masonic rituals are secret because "they are easy to find on numerous websites" (p. 13). However, he does not name such a website that could serve as a reliable source. If the rituals of Freemasonry, its obedience or any other obedience are not secret, then why not publish them on the official site of the Grand Lodge? 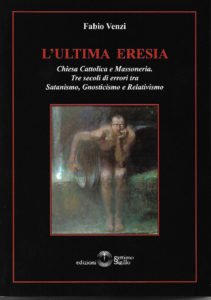 Rather, the Grand Master blames the chairman of the parliamentary committee of inquiry Bindi for asking him a "provocative" question at the hearing (p. 23). In fact, the question to the Grand Master was directly related to the mission of the Anti-Mafia Committee:

"Do you know the 'Santa', the leader of the` Ndrangheta, who smuggle their men into the Masonic lodges? "1)


"Freemasonry can survive in the underground"

Grand Master Venzi is astonished that the Bindi report mentions a possible "dissolution of the societies" (p. 25) by the state.

Cryptically, the Grand Master indicates that the Masons are capable of working in the underground in such a case.

"Even if Italy forbade Freemasonry, it would still exist abroad, which could infiltrate it and rebuild it in Italy" (p. 25).

In other words, the Grand Master indicates that a state ban can not shake a secret society with so much experience.

The Bindi report also mentions Pope Francis, who in 2017 refused accreditation to the Holy See for a designated ambassador because of his membership in the lodge. Apparently, the Grand Master is concerned that the Italian State could follow suit and remove the Freemasons from its diplomatic service among its ambassadors. But this danger does not seem to exist, for Bindi emphasized in her report that the Anti-Mafia Committee of Inquiry had "nothing to do with the phenomenon of Freemasonry itself", not even with Italian Freemasonry as a whole, but only with four obediences including the Grand Lodge (p. 91f).

The Grand Master does not have to worry. The Italian state will not ban Freemasonry because every government would fear a massive national and international reaction from Freemasonry. In view of the Grandmaster's suggestion of contacts with high-ranking Church representatives, it would not be excluded that even there someone could tune into the choir in defense of the lodge brothers. 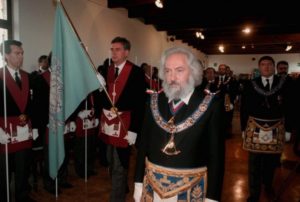 "The Grand Lodge of Italy, according to the report of the anti-mafia commission on the Great Orient, is most contaminated by infiltrations of the mafia and the 'Ndrangheta" (Min. 31: 50-32: 13) .2).

"The Grand Lodge of Italy, which was the showpiece of Italian and English Freemasonry, was reduced to rubble by Fabio Venzi. I wonder how the Grand Lodge of England can continue to recognize her as the only Masonic obedience on Italian soil. Why does not Venzi come back? If Venzi leaves, perhaps someone else could return a minimum of dignity to what I call my Masonic creation "(Min 33: 23-34: 20).


An "enlightened despot" is supposed to rule the world

Far more interesting than these internal-lodge animosities is another statement by Di Bernardo, who was, after all, the grand master of Italy's two biggest obediences and internationally well-connected. Di Bernardo is convinced that "global society" can not be governed democratically, but only through "a community of wise men who embody the One, the enlightened tyrant" (Min. 40: 00-40: 47). 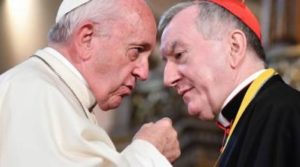 But was it not Freemasonry, which in the 18th.-- 20th Centuries fought with particular determination against the ancien regime and against the monarchies (except the English) and for democracy? Did democracy serve only as an intermediate step to get rid of the old order?

In an interview with the daily Libero on 22 February 2016, the former Grand Master praised Cardinal Secretary of State Pietro Parolin, the Vatican diplomat whom Pope Francis sent to the Vatican Secretariat of State in the Summer of 2013. Parolin attended an annnual convention of the Bilderbergers at the beginning of June as the first Secretary of State with the consent of Pope Francis.

And what does a Grand Master praise a Cardinal Secretary of State for? Because Parolin, according to Di Bernardo, has "no negative and hostile attitude towards the freemasonry and the esoteric." This then resulted in the following question and answer in the Libero interview:

Libero: What is your prototype of an enlightened tyrant?

Di Bernardo: If I really should name one, I would say: Pope Francis.


It is understable why so many believe Pope Benedict is still the Supreme Pontiff.
https://accionliturgica.blogspot.com/2018/07/visita-benedicto-xvi.html