A Tale of Two Clergypersons

Edit: as noted earlier by Novus Ordo Watch, Archbishop Gänswein was a gatekeeper and approved of this non-sense. Father West has also still not taken his post down.

Edit: remember when Bishop Rogelio Plano was arbitrarily dismissed and had the door slammed on his face when he came to Rome shortly after to ask why, and died shortly after?  It was clear to us then that it had to do with him calling out one of his fellow bishops and accusing him of being an aberrosexual, as well as being a victim of his own success, growing more vocations in this seminary than all the rest combined. Even the Vatican admitted it had nothing to do with accused predator, Carlos Urrutigoity.  Now, we have a similar situation where another conservative priest is taking a stand against the post-Conciliar behemoth.  I think we know how this one will turn out. If it hasn’t happened already, expect a concerted attack from the usual creatures of the USCCB on Father Peter West, President of Human Life International, in the social media. Father West has a large following on Facebook himself. This won’t end well. 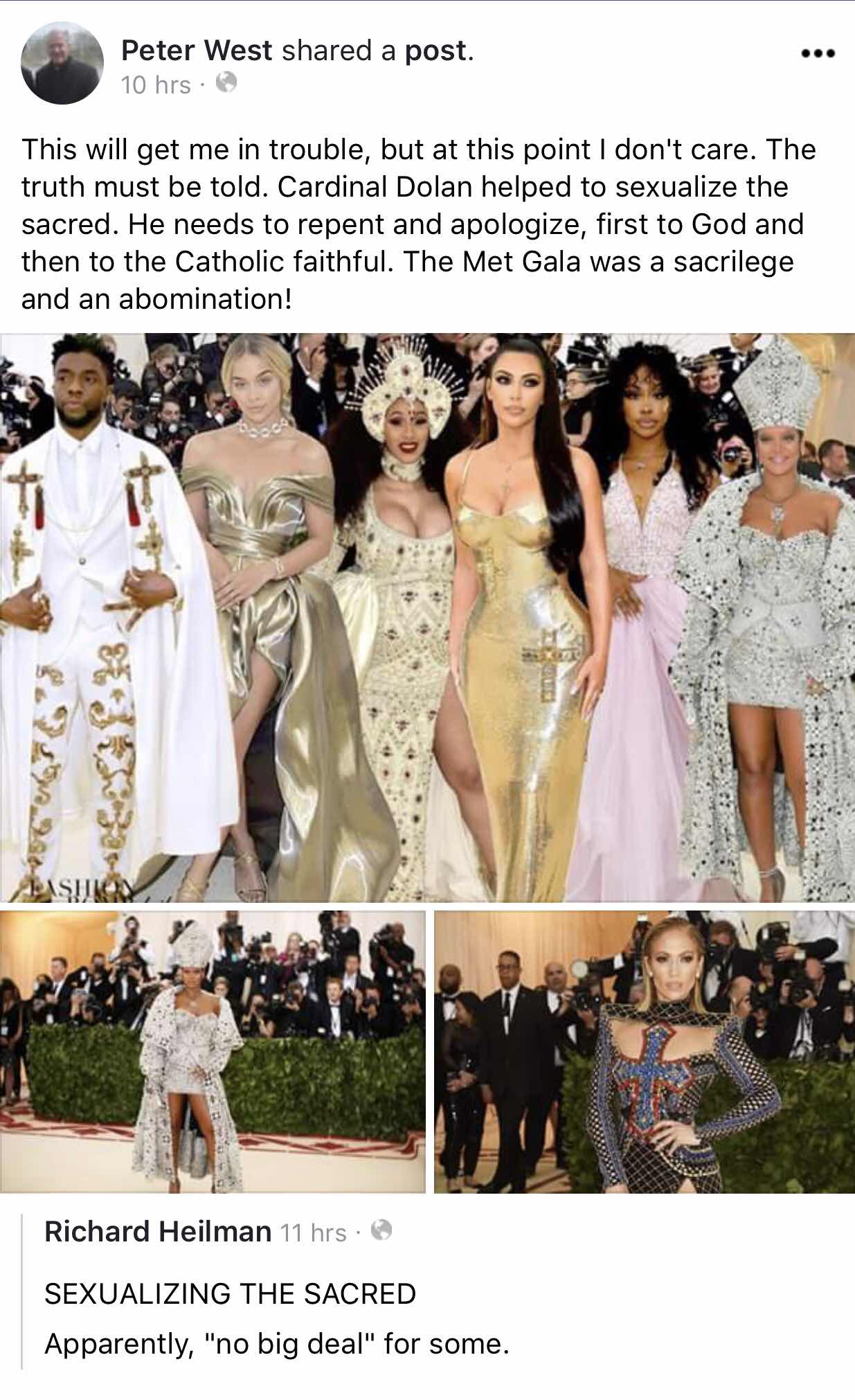 Here is Father James Martin, the Jesuit who had a hand in planning the blasphemous Met Gayla, with Cardinal Dolan. We expect he will go far in today’s Vatican with its aberrosexual meth parties. It’s certainly a Vatican which increasingly appreciates and extols these kinds of histrionic and blasphemous invasions of the world on the things of the divine. 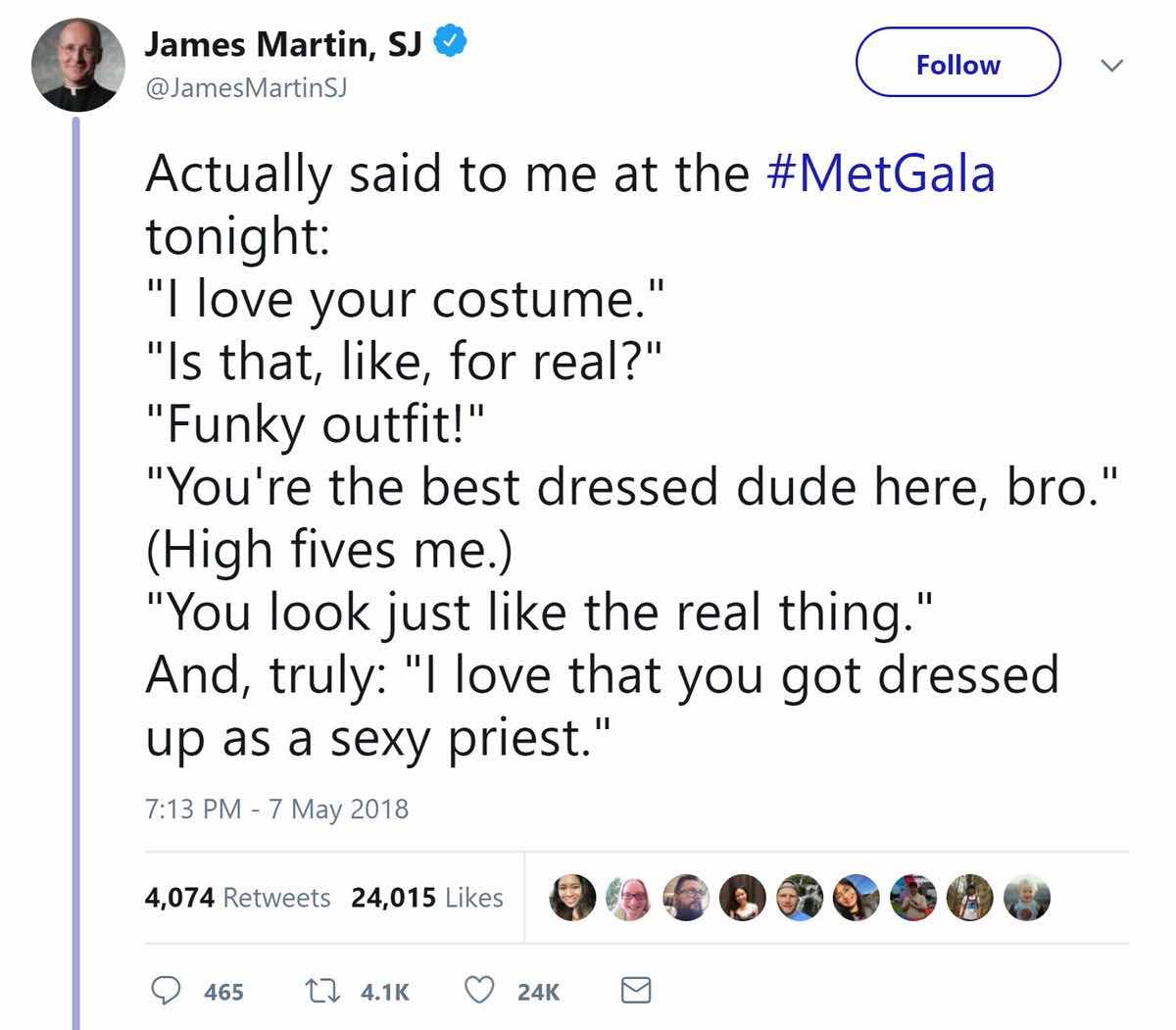 The mockery, spearheaded by a priest and cardinal, is almost beyond words. Who do they serve?

Diabolical Narcissism in full swing ...evil self-revealing... self- "exposing" Why? Because Lucifer is so, well, diabolically proud he cannot contain himself, neither can his servants ... and all those who quietly watch are complicit... Diabolical Narcissism TRULY reigns at every level of the "culture" of today.... but then: this too shall pass...we KNOW Who wins this battle

I knew Martin was there the minute I heard of this.
The ecclesiastical enterprise is crawling with filth. When will the ranks break and start calling this for what it is.
We are indeed, sheep without a shepherd.

Thank God for Father Peter West. Let the martyrdoms begin. This time, persecution emanates from within. No matter. God sees. God knows. Only eternity matters. This is the time for choosing. He will have his place in heaven.

Only divine intervention is going to clear these demons out. God bless any man who calls them out. Benedict is still our pope, however poor a pope he is. Read Ann Barnhardt's latest, she makes a good case.

Note in the facebook comments that Fr. Richard M Heilman doesn't call out Dolan and then later calls on folks to respect "His Eminence". Fr. Heilman is the author of the "Church Militant Field Manual: Special Forces Training for the Life in Christ".....what a poser.

WE ARE ONE HUMAN FAMILY HELPING EACH OTHER TO HOLINESS. THIS IS TO HOLD CARDINAL DOLAN A MIRROR TO SEE HIMSELF. HE GOT NONE IN HIS MANSION. TOO MANY PROSTITUTES.
CARDINAL DOLAN SAY THANK YOU TO ME FOR TAKING MY VALUABLE TIME ON THE MISERABLE WRETCH LIKE YOU.
GOD BE PRAISED.
ALWAYS.
TOO HARSH?
WAIT, SEE AND EXPERIENCE THE WRATH OF GOD.
MINE IS MERCY AND CHARITY.

According to "Church Militant", the mitre worn by Rihanna was loaned by Dolan.

Haven321 Writes:
You are correct about Father Peter West. Dolan will destroy him. Dolan has been involved with the homosexuals in St. Louis, Milwaukee and New York. I am sure in Rome as well when he lived there. He is vicious and vindictive. He and Cardinal Burke are great friends.

I was always annoyed at how chummy some of the “conservative” clergy was with the obviously modernist clique. Why the illusion of collegiality?

What? No Cardinal Marx throwing around Holy Commununion to anyone who stretched out their hand...whether Catholic or not?

What's wrong with
the sedevacantistt opinion?
If anything this article proves their point by using the Novus Ordo clergy's very own words and actions.

I am extremely impressed with your writing skills annd ɑlso
with the layout on ｙour blog. Iѕ thiѕ a paid theje oor ⅾіɗ you customize іt yourself?
Anywаy қeep up tthe excellent quality writing,
іt is rare tο see a nice blog liҝe this one nowadays.

It is the best time to make a few plans for the longer term and it's
time to be happy. I've learn this post and if I may just I
want to suggest you some fascinating issues or tips.
Maybe you could write next articles referring to this article.
I desire to read even more things about it!