Lenten Retreat Master Wants to "Free" the Church From Its Dogma 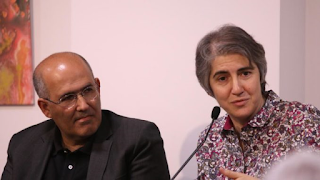 Jose Tolentino de Mendonça, Retreat Master of the Lenten Exercises in 2018 for Pope Francis and the Roman Curia, with the feminist theologian Sr. Teresa Forcades, who calls for a queer revolution in the Church.

(Rome) Yesterday, the Roman Curia's Lenten retreat, in which Pope Francis also took part, came to an end in Ariccia, near Rome. This year's retreat master raises some questions. For the retreat this year, Pope Francis summoned the Portuguese priestly poet José Tolentino de Mendonça.  He is known as "a fan of Sr. Teresa Forcades," says Corrispondenza Romana. The Catalan theologian, born in 1966, is considered by her followers to be a representative of "feminist theology," "critical theology," and Liberation Theology.


In 1990, she began a medical degree in Barcelona, ​​which she completed with a specialization in internal medicine in New York. In Harvard in 1997 she earned a degree in Protestant theology and entered the Benedictine monastery of Montserrat in Barcelona in the same year. In Catalonia, she graduated in Catholic Theology and graduated in 2009 with a PhD in Fundamental Theology. In 2013 she received a lectureship in theology and gender studies at the Berlin Humboldt University. Since 2013, she has also appeared as an activist for the independence of Catalonia.

In 2015, she was exclaustrated with the approval of the Vatican and left her monastery to run in the Catalan parliamentary elections. She continues to be considered a nun, is subject to her obligations and can at any time return to her monastery, as Spanish media reported.

Among other things, Forcades campaigns internationally for the recognition of aberrosexuality by the Church in the course of her feminist theology. Whether coincidence or not, while Tolentino was giving the pope and the curial retreat, Forcades is promoting the Italian edition of her book, "We are all different! For a queer theology" in Italy.

Tolentino, her "fan", is Deputy Rector of the Catholic University of Lisbon and Consultor of the Pontifical Council for Culture. For Pope Francis and the management of the Vatican dicastery he chose as theme: "Praise of thirst".

New climate for aberrosexuality since Francis


While giving the retreat, or shortly before, Forcades toured Italy to promote the recognition of homosexuality by the Church, although the official theme of her lectures was mostly Women's Theology.

On the website Gionata, a circle of "Christian LGBT" it says:

"In the context of the book launch, Forcades emphasized that the Church's relationship to homosexuality had finally changed with the election of Pope Francis. He tries to do the utmost, including through the Family Synod, to change the Church's attitude toward homosexuality."

Nota bene: Forcades does not speak of the Church's attitude toward homosexuals, but of homosexuality.
Forcades reveals even more:

"At the Family Synod, he has not been able to move forward, but the atmosphere is not the same as before Pope Francis came."

For example, Sr. Jeannine Gramick [self-confessed lesbian], who for many years in the US is fighting for not only accepting that someone is aberrosexual, but also the aberrosexual acts that are recognized as physical love. She has said that since Francis Pope, she is no longer exposed to any pressure she has experienced before. "

"Renewal" of the church is "queer"

According to Forcades, the Church is making "big steps forward," especially in Oceana and South America in dialogue with homosexuals: "much faster than in Europe."
The "renewal" of the Church is gay for Forcades, or to put it in their words: "queer." She speaks  literally of a "queer revolution".

In 2015, in an interview with Corriere della Sera on "gay marriage", she said that she is in favor of "sexual identities being no drawers, but God wanting them to complement one another, one and the other." And anyway: "What's wrong with that? They seem happy. Why should not they be blessed?  Why not in the church? Do not we have to rejoice over love, no matter what form and expression it has?"

A few months later, in February 2016, she told La Repubblica : "Love is always a sacrament of God." She was also in favor of adoption for aberrosexuals:

"What children need is an adult, mature and responsible love from parents who sacrifice their needs for the children. Whether they are growing up with two women or two men is not a problem."


Tolentino's "model" for the future of Christianity


The appointment of Jose Tolentino as retreat master to Ariccia, a man who prides himself on making contact with a dubious theologian such as Forcades, would be of dubious quality to any Catholic group.  His call to retreat for the Roman Curia "seems to be an expression of a political plan," says Corrispondenza Romana. "The friendship" between Tolentino and Forcades "is based on an obvious equality of thought." Forcade's book,"The Feminist Theology of History," features a foreword by Tolentino.  In it he dreams of a "different history."

"The history of the West (and of the Church) might have been different if a symbolic, open and sensitive way had been chosen as an approach to the real, rather than creating the clear, triumphalist grammar we know. I repeat: maybe the story would be different.  This is where the extraordinary work of Teresa Forcades i Vila, the feminist theology of history which the reader holds in her hand, comes to our aid."

"is in any case courageous: to show the contradictions and seek alternative interpretations that support a break of meaning and civilization. One conviction left by the book is that the future of Christianity depends especially on the purification process that succeeds us in its past and present. "

It is Forcade's merit, according to Tolentino, to have emphasized the importance of a relationship ethic that is free from strict and codified norms:

"Teresa Forcades i Vila reminds us of the essentials: that Jesus of Nazareth neither codified nor regulated. That is, he has created an ethic of relationship; he transformed the poetry of his message into the visibility of his flesh; he showed his body as a premise."

"What spiritual fruits can the participants of the fasting exercises of Ariccia get from it?"

Something to think about with 'Feminist' theology:

Mary’s Prophetic Anthem in the house of Elizabeth
Luke 1:46-55 otherwise known as The Magnificat:

“And Mary said:
‘My soul magnifies the Lord,
And my spirit rejoices in God my Savior,
For he has been mindful of the humble state of his servant.
From now on all generations will call me blessed,
For the Mighty One has done great things for me.
Holy is his name.
His mercy extends to those who fear him,
From generation to generation.
He has performed mighty deeds with his arm;
He has scattered those who are proud in their inmost thoughts.
He has brought down rulers from their thrones
But has lifted up the humble.
He has filled the hungry with good things
But has sent the rich away empty.
He has helped his servant Israel,
Remembering to be merciful to Abraham
And his descendants forever, even as he said to our fathers.’”

“During the British rule of India, the Magnificat was prohibited from being sung in church. In the 1980s, Guatemala’s government discovered Mary’s words about God’s preferential love for the poor to be too dangerous and revolutionary. The song had been creating quite the stirring amongst Guatemala’s impoverished masses. Mary’s words were inspiring the Guatemalan poor to believe that change was indeed possible. Thus their government banned any public recitation of Mary’s words. Similarly, after the Mothers of the Plaza de Mayo—whose children all disappeared during the Dirty War—placed the Magnificat’s words on posters throughout the capital plaza, the military junta of Argentina outlawed any public display of Mary’s song.”
- Jason Porterfield, “The Subversive Magnificat: What Mary Expected The Messiah To Be Like,” (http://enemylove.com/subversive-magnificat-mary-expected-messiah-to-be-like/)

Not only are they "out of the closet", they have burned the closet. This is parallel to a statement of Mark Steyn in Nov 2015. "The barbarians are inside and there are no gates". Malachi Martin talked of a "return to paganism". What else can it be?

Malachi Martin knew all about the 'return to paganism'; he led the head long charge into his own exotic form of Christless Christianity. That gained quite a few disciples, didn't it, JBQ?

"It is Forcade's merit, according to Tolentino, to have emphasized the importance of a relationship ethic that is free from strict and codified norms:"

Have I missed something in the Gospels or did Jesus not make his teaching very clear on for example, adultery, the Eucharist and Himself as the Bread of Life and what awaits those who scandalise little ones? Also, He came to fulfill the Law not abolish it,to reinforce indeed those long established codes for living. I think of the strength of his words..."But I say to you." Is Forcade at liberty to revise these laws to justify sexual relationships still condemned by the Church?