The Case of the Cardinal’s Missing Ring 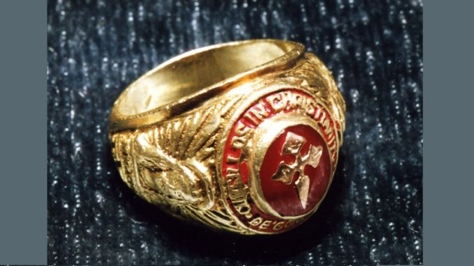 The great Greek historian Herodotus (484-426 BC) describes in his work Histories of the Persian Wars in a sideline, the touching story of the Ring of Polycrates.

The ring of Polykrates

Polykrates was tyrant and sole ruler of the island of Samos in the Aegean Sea in the 6th century BC. All his undertakings were successful, and he was considered the luckiest man on earth. So that the gods would not be jealous of him, he wanted to do himself a misfortune.

On a boat trip, he threw his extraordinarily beautiful, beloved golden ring into the sea and actually felt mourning. A little later two fishermen caught a big golden fish and brought it as a gift to the tyrant Polycrates. Great was the surprise when the golden ring of the ruler came to light when the fish was gutted.

Polycrates wept a lot, because he knew: The gods will eventually take revenge for this incredible luck.

A little later, Polycrates was fraudulently lured by the Persians to the mainland and died a cruel death.

The ring of Godfried Danneels

Just as unbelievable but completely real is the history of the bishop's ring of Cardinal Danneels. 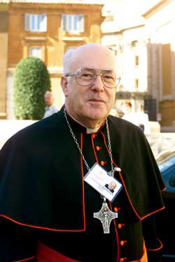 The story began on a midsummer Monday afternoon in 1981 in the archiepiscopal city of Mechelen in Belgium. A very pale and slender young man, somewhat neglected, entered a jewelery shop and asked if one could not appraise the ring he had brought.

As a specialist, the jeweler immediately recognized what he was shown, agreed and took the ring to the back room for inspection:

It was the bishop's ring of his Archbishop Godfried Danneels, who had been appointed Archbishop of Mechelen-Brussels and Primate of Belgium in 1977.

Immediately the police were alerted by Mechelen, who had no idea about this. The archdiocesan office had filed neither a loss report nor a burglary or theft.

The police notified the archbishop's secretary, who was very friendly, grateful and courteous, but at the same time well-connected with the circumstances of the apparent loss.

Later, somewhere in the archiepiscopal palace, a window was found. Godfried Danneels testified that he had heard some noise and had glimpsed two shadowy figures fleeing. The two elderly religious women who also lived in the palace had neither seen nor heard anything.

Nothing was missing except the ring.

According to the cardinal and his direct collaborators, the bishop ring was always on the archbishop's desk. Its disappearance had not been noticed.

Why the lack of one of the most important insignia and pontificals of a bishop1) could go unnoticed for at least several days, and this despite a daily obligation to test remained an open question.

The pale youth was also not very informative.

A very mysterious case with many inconsistencies.

The archdiocese, evidently very happy that the lost piece was back, practiced generous misericordia and wanted to forgive and forget everything and not cause a fuss. 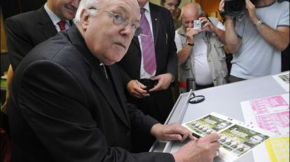 But that was hardly possible. By now too many people knew about this curious case. Even more annoying was that Danneels, already noticed by other peculiarities and strange contacts and always dealing with sexual issues again, got into a spicy situation.

Danneeel's friends, who defiantly defended the archbishop, came up with the really stupid idea of ​​linking the mysterious emergence of the Archbishop's episcopal ring to a theft story that was belatedly but extensively passed on to the press and spread internationally.

Of course, that did not work internationally and later with the new media. Paradoxically, it was precisely the press campaign directed by the archdiocese that documented this mysterious Ring story.

The Dutch newspaper Leidse Courant (fully archived on the internet) on Wednesday, July 22, 1981 reported on the theft. The ring had already reappeared then! Such an episode could not hide.

It is also mentioned briefly in the great Danneels biography, which was published in 2015 by his friend and admirer Jürgen Mettepenningen, a well-worn and now married ex-Benedictine monk.

Typical for the era

By the way, the pale young man who cherished the ring never spoke again.

Theoretically, the offense should have been theft / burglary / stealing or participation in it. As Cardinal Danneels said over and over again, and probably until the bitter end (in the Danneels tapes with the abused nephew of his friend and pedophile Bishop of Bruges, Roger Vangheluwe) will say: "One must forgive and forget".

In any case, the story does not announce great respect for the episcopal insignia and the sense of the sacred. Rather, it is typical of Danneel's era: lots of nonsense, heresies and mistakes, all hushed up, glossed over and bent over.

The mafia of Sankt Gallen already had very strange members.

Rather a strange story with an unknown meaning with lots of innuendos.

First off, don't ever let the jeweler take your object into the back room, no sir, you make sure he checks it there right in front of you.

Thanks for the tip!