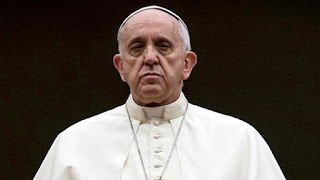 (Rome) The book "The Dictator Pope" (Il Papa dittatore) by Marcantonio Colonna, a pseudonym of the unknown author, has been causing much discussion for days, and not only in Rome. It also describes the rise of Jorge Mario Bergoglios. The daily La Verità conducted an interview with the author by e-mail.


Marcantonio Colonna was one of the three victors of the Battle of Lepanto, who stopped the Islamic encroachment against Europe at sea in 1571. Colonna was commander of the papal troops and later viceroy of the Spanish Habsburgs in the Kingdom of Sicily.
"The little book attracts half the world's interest," according to the daily La Verità. Media around the world have already reported it. After the Italian edition, an English has appeared. Further translations are planned. A German edition is in preparation.
La Verità: Why did you decide to write this book? And why do you use a pseudonym for this?
Marcantonio Colonna: Basically, the media image that Pope Francis has benefited from over the past five years is one of the most extraordinary scam stories of the present day. Everyone who works in the Vatican knows the profound difference between image and reality and one should not be surprised that somebody reveals this truth at some point.
I wrote my book under the name of Marcantonio Colonna because he was a great military leader of the 16th century Catholic Church. Anyone who reads the book will see that it is in no way an attack on the Church. The intention is to prevent the Church from making another such mistake, that of choosing a little-known cardinal to be the pope [He was certainly well-known by the Sankt Gallen group who had tried to elect him in the Conclave following John Paul II's death], who then turns out to be quite different from what he appeared to be. The pseudonym was necessary because, as the book says, Pope Francis mercilessly avenges himself on those who oppose him. The three assistants of Cardinal Müller, who were dismissed in October 2016 for alleged criticism of the Pope, are an example of this.

La Verità: In your opinion, why is Bergoglio a "dictator"?
Marcantonio Colonna: The meaning of the word "dictator" is that of a sovereign exercising his personal while disregarding law and order. This is quite different from the legitimate authority that traditionally belongs to the head of the Catholic Church. I could refer again to Cardinal Müller. He tried to defend his three subordinates when they were dismissed. He received the answer from the Pope: "I am the Pope and I owe no explanation for any of my words." This is not the way in which the popes traditionally exercise their authority. In calling Pope Francis a dictator, I also wanted to show the close parallels between his style and that of Juan Peron, the dictator of Argentina in Bergoglio's youth. His influence is crucial to explain the style of Francis. As I say in the book, it is the ecclesiastical implementation of Juan Peron.

The disappeared report of the Jesuit Father General

La Verità: In the book you tell a little known episode from Bergoglios past. It concerns the Jesuit Father Kolvenbach. Who is this? How did you hear about the episode?


Marcantonio Colonna: In 1991, when Father Jorge Bergoglio was appointed as Auxiliary Bishop of Argentina, a report by the Superior General of his Order, Father Kolvenbach, was needed. The response of Father Kolvenbach, based on the opinion of other members of his order, was that Bergoglio was not fit to be appointed bishop. Pater Kolvenbach claimed that Bergoglio's psychological balance was lacking, that he had a deceitful character and that during his time as Provincial, he had divided Argentina. This report was then distributed among the former members of the Congregation for the Bishops and therefore became known to a rather large number of people. Bergoglio hurried to make it disappear when he became pope. The copy, which was in the official archives of the Jesuit order in Rome, has disappeared.
La Verità: How did you collect the material for your book?
Marcantonio Colonna: Various journalists have written of my book that it contains little new. In fact, much of it relies on articles published in the past four years, for example, by Sandro Magister. It was just about putting the material together. Nevertheless, I think that my book, with its second chapter, is an important contribution that describes the past of Jorge Bergoglio in Argentina, where he was known as a cunning politician and manipulator in the Peronist tradition. Again, there is nothing new for an Argentine, but it is about making these facts known to the rest of the world. I was just the instrument who translated it across language barriers. Once again, the revelations about the resistance to reform and the rule of fear that now prevail in the Vatican are familiar to anyone working there, but it was necessary for someone to publicly tell what was already known in secret.

The mafia of Sankt Gallen

La Verità: How was Bergoglio Pope?
Marcantonio Colonna: My first chapter describes the action of the Cardinals' group for the 2013 Conclave, which became known as the "Mafia of St. Gallen" to ensure Bergoglio's election. This description comes from a member of the group itself, the Belgian Cardinal Danneels, who was so proud to have planned Bergoglio's choice that he told all his biographers. And let me add that the name "Mafia von Sankt Gallen" also comes from Danneels. He was obviously unaware that he was thus announcing a grave violation of canon law prohibiting any form of conspiracy to influence a conclave. The group of Sankt Gallen met for years, secretly, before the conclave of 2005, where they tried to prevent the election of Cardinal Ratzinger to Pope Benedict XVI. The candidate presented at the time was Bergoglio. When Benedict unexpectedly abdicated in 2013, they seized the opportunity to resume the failed attempt eight years previously.

The strangled reform of the Church

La Verità: What do you think about the reforms of Bergoglio?
Marcantonio Colonna: The third chapter is called "Reforms? What reforms?" It describes in detail how the reforms of powerful curia representatives, with whom Francis had allied, were completely blocked. First and foremost, the reform of the Curia was canceled out by the State Secretariat, that Cardinal Parolin is more powerful than ever. Secondly, the broken promise to take action against the scandal of pedophile priests: there are cases of well-known priests who are protected by senior representatives of the Curia. Thirdly, the complete cessation of the financial reform that was expected when the new Economic Secretariat, headed by Cardinal Pell, was set up. It was fought by a small circle of Cardinals who did not want to give up their control, and they managed to defeat them. The dismissal of the Vatican general auditor, Libero Milone, was another victory for those who oppose the reforms. Why did this happen? Because Pope Francis, who was elected to reform the Church, has come to the conclusion that he can control the Curia much more efficiently by the corrupt figures who depend on him for power. They obey him blindly.
La Verità: Was there any reaction from the Vatican to your polemic?
Marcantonio Colonna: My book did not please the Vatican. There were immediate attempts to find out who wrote it. They thought they'd figured on the author being someone who was in England and harassed him with telephone threats. What they are unaware of is that the book is not a one-on-one opinion but expresses the concerns of many people, in the Vatican and beyond, who want the truth to be known.
Translation: Giuseppe Nardi
Image: Wikicommons / MiL
Trans: Tancred vekron99@hotmail.com
Katholisches...
AMDG
Posted by Tancred at 8:01 AM

Trads are particularly important to influence. They are considered the last line of defense of the Church. Thus they have dozens of their operatives devoted to setting up fake Trad Forums, fake Trad Blogs such as Anonymous of the Cross, fake Catholic Media or News, etc... in all languages to demoralize and divert.

So what is the diversion? It is not the St. Gallen Homo network but the 2000 year old subversion and infiltration of the Tribe at the highest level of the Church namely the Seat of Peter.

If you want people to take you seriously, the first step would be to write in a manner which does not make you sound like a raving nut.

Anyways, good interview, although I'll still likely not pick up the book; I for one don't need convincing that Francis' personality is fraudulent...