The previously "balanced secularism" is being shaken in France by "attacks on Christ and the cross." The Diocese of Vanne will help to find a solution.

Ploermel (kath.net) The Paris administrative court had ruled that the cross must be removed on the larger-than-life monument of Pope John Paul II, kath.net has reported. Now the Diocese of Vannes is criticizing the decision. Although the statue does not belong to the church, but to the small town of Ploermel, the diocese does not want to challenge the decision in court, the diocese explained in a press release. But the diocese regrets the tendency that Christians are less and less visible in society. The previous "balanced secularism" France has been upset by "attacks on Christ and the cross." The Diocese of Vanne will help to find a solution.

Even the mayor of Ploermel is committed to the location of the cross. He suggests that the ground on which the statue stands should be given to a private person, and French law allows crosses to be displayed on private property. The seven-meter-high Pope statue is visited by tourists.
The dispute over the cross has long been internationally known. Even the Polish government has since intervened and expressed its concern for the process.

The statue in its original form 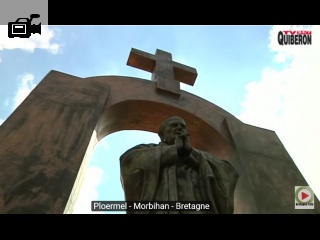 How do you keep the fish alive after you gut it.
Poor France. Her choices will bring her to ruin.

They reject the Cross,before long they will be living under the cresent .

Weep for France, they have one HUGE fight ahead of them, it ain't gonna be pretty.

They don't have enough desirous or willing to fight...at least not for Truth. Sadly, neither do we. The remnant is paring down. That has been the 'positive' of bergogio's effect....the true colors of all are coming into the light.