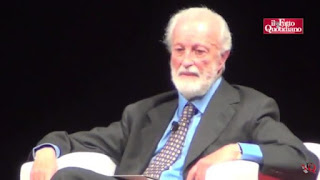 (Rome) Is Pope Francis a Marxist? Or Communist? Who knows, but certainly he is a "revolutionary," as his friend and avowed atheist Eugenio Scalfari explained in the recent editorial of his La Repubblica, the only daily newspaper that is said to be regularly read by Francis.
Questions about the pope's political convictions have cropped up since the pontificate began. The starting point was in autumn 2013 with the publication of Evangelii gaudium. At the time, critics in the United States called Francis a Marxist.

Is the pope a Marxist? A communist?

From the left side it was first mentioned particularly clearly in connection with the visit of the Greek Prime Minister Alexis Tsipras.
Tsipras, a representative of the radical left, which emerged from the former Communist Party of Greece, was received in September 2014 by Pope Francis in Santa Marta. The meeting came about through the mediation of Walter Baier, former president of the Communist Party of Austria (KPÖ). Following the meeting, Tsipras said:

"The Pope is not a leftist, but he talks like a leftist".

At the same time, he emphasized the importance of dialogue with the head of the church, which should be continued.

On March 13, 2015, the Marxist philosopher Gianni Vattimo called on a left-wing public in Buenos Aires to stand behind Pope Francis to form a new Communist International, which he called the Papist International. Besides Vattimo, Curial Bishop Marcelo Sanchez Sorondo, the political arm of Pope Francis, sat by the podium.
Following the electoral defeat of the US left in the 2016 presidential election, The Wall Street Journal wrote:

"Pope Francis is the leader of the global left".

When Francis was approached directly by journalists, he replied indirectly.
When asked by his house Vaticanist Andrea Tornielli in December 2013 how he felt being described as a Marxist, he said he was "not offended" by it.
When he was asked in June 2014 by a Messaggero journalist if he felt he was a Communist - The Economist had written at the time that the Pope was a Communist and spoke like Lenin - Francis said:

"All I'm saying is that the Communists stole the flag. The flag of the poor is Christian. Poverty is at the heart of the gospel. [...] The communists say that everything is communist. Yes, 20 centuries later. If they talk like that, you could say to them, "You are Christians."

See also Is the Pope a Communist? Maike Hickson's interview with George Neumayr about his book "The Political Pope" .

Is the pope a revolutionary? "Yes, he really is."

Many Bergoglians have called the Pope a "revolutionary" in the past. The term seems to have been used more fashionably and coquettishly, but when specifically addressed,  such a papal revolution was denied by the just the same opinion makers.
But now the pope described himself as a revolutionary.
Herald of the news is his friend Eugenio Scalfari, who likes to put words in Pope Francis' mouth.  The idiosyncratic method of Scalfari's Pope interviews, he reported himself in November 2013. Since the avowed atheist has not been denied by the Vatican since then, instead getting new interviews with the Pope and presenting these interviews to the Vatican in book form, the reproductions of papal statements by the doyen of leftist journalism must be taken seriously.
On November 26, Scalfari published a new editorial in which he reported on a telephone conversation with Pope Francis. From the context it can be seen that Francis was the one who called Scalfari.

"Frequently, when I talked to Pope Francis, I called him a revolutionary and one day, in one of our telephone conversations, he answered my 'hello', 'This is a revolutionary'."

"He said it jokingly, but it is him, and what he said on this recent occasion confirms it."

The future: immigration and EU

The content of the editorial briefly outlined:
Scalfari attests to the Pope being the "only voice" that "describes the situation of the whole world" and shows the way "to overcome selfishness and indifference". What is this about? Concerning immigration and the EU, which Scalfari equates with Europe, as is common among his peers. A ridiculous thing, considering that the EU has only existed since 2009.
Scalfari stresses that Pope Francis has hesitated for a short time because of the imminent demand from Africa, but now again pleads for an unrestricted immigration, because "whoever comes from Hell, can not be treated to another Hell."
As immigration from Africa mainly affects the countries bordering on the Mediterranean and means "a not insignificant economic burden", "all the states of Europe" and North America would have to bear the "economic burden that immigration produces."

"In short, a social revolution of the rich world towards the poor world."

Scalfari, who proudly refers to pictures of his grandfather and father in his house, who were Masons, and even as such, adds a detail, after all, in 2017 the lodges are celebrating the founding of Freemasonry 300 years ago.
For Scalfari ("as a non-believer is it allowed") it is clear that Pope Francis is a revolutionary. And he is happy. For the "future of another world," Scalfari sees in the context of unrestricted immigration to the EU will be founded on the "fundamental values" of "freedom, social justice and brotherhood."

"Thus the church will also be modernized, and the best of secularism, created three centuries ago, supports the same values ​​that Francis remembers and supports."

@Hugh O'Brien: Not rubbish. Methinks thou dost protest too much.

Francis is out to create a one world socialist government and one world religion. He is working to "dissolve organized religion" and to create a "new spiritual belief system based on world unity". His goal of "redistribution of wealth" through "unlimited immigration" connotes a simplistic view of economics. True economics involves the just creation of resources and their equitable distribution through taxation. Being against the use of fossil fuels betokens a "mad hatter" approach to reality.----Francis has no understanding of economics. It is also obvious that his views on morality are entirely suspect. Of course, he is a Marxist and maybe not a Communist. Scalfari is a Mason from a Masonic family tradition and a confidant of a radical pontiff. That is all one needs to know.

noooooo, you mental midget. bergoglio sins because he speaks and teaches with the serpent's tongue.

It is NOT that he likes to spread his scree through an atheists, or that he can kneel to kiss feet of non-Catholics, or that he welcomes abortionists and population control people, or homosexuals or denigrates the faithful...it is the scandal that he continually gives and the non-teaching of the Catholic faith. He does not act like a pope, a holy father should. He lets confusion reign and sets up divisions and allows corruption all around him.

The Dictator Pope (https://www.amazon.it/Papa-Dittatore-Marcantonio-Colonna-ebook/dp/B077M5ZH4M
The author is an Oxford-educated historian who hides under the name of “Marcantonio Colonna”. His style is sober and documented, but his accusations against Pope Bergoglio are numerous and strong. Many of the elements he has based in the formulation of his accusations are well-known, but what is new is the accurate description of a series of “historical pictures”: the intrigue of Pope Bergoglio’s election, piloted by the “St. Gallen Mafia”;  Bergoglio’s Argentinean behavior and actions before his election; the obstacles Cardinal Pell encountered after having attempted a financial reform  of the Curia; the revision of the Pontifical Academy for Life; the persecution of the Franciscans of the Immaculate and the decapitation of the Sovereign Military Order of Malta.

Jorge is simply a street thug, whom the Peter Principle has been manifested through. He is nothing like floating cream.

We all know what else floats and what Jorge's words and actions resemble more than anything. And, I DON'T mean Shiitake Mushrooms!

THEY are at least nutritious and flavourful.

The non-sequitur is the native home of the Yee-Hah hillbilly queen of gibberish.

@Charles: If someone put your brain on the edge of a knife, it would look like a pee on a superhighway. Didn't your mother teach you not to pick on women or is Weinstein one of your heroes?

...more like what they're grown in; otherwise known as "charles/feybriel's" brain matter...ah? eh? no?

“The problem with the world is that fools and fanatics are always so certain.’' – Bertand Russell

Yee Hah queen? Huh? What kind of creep even talks like that?

Is this hypocritical slime mould one of your heros, Gaybrielle?

Scalfari misrepresents Francis occasionally, but Francis at least tacitly approves of the Freemason's liberties. It's one thing to visit sinners and it's another thing to let them set your agenda.

Bertie speaks well of you, Adolph so why the pique?

Gaybriel go get back into your hot tub you enjoy sharing with Monsignor Loftus. If you aren't the same person.

Anonymous said...
This comment has been removed by a blog administrator.
December 3, 2017 at 1:55 AM

God is in control. Stop worrying about Francis. God has already set everything in motion that needs to be.

He is God, they are only men.

Read the "tea leaves". Read the "handwriting on the wall". The agenda of Francis is becoming very clear. You need only read Teilhard de Chardin, SJ, to get the gist. Malachi Martin, SJ, defined the blueprint in his novels.